Our lawyers are handling Camp Lejeune bladder cancer lawsuits in all 50 states.

This page is about bladder cancer injury and wrongful death claims. Our law firm discusses the legislation that will allow a Camp Lejeune water contamination lawsuit.

Camp Lejuene bladder cancer cases will be strong claims with a high likelihood of good settlement payouts.  Why?  No reasonable person can argue that PCEs do not cause bladder cancer.  The science is clear and PCEs were ubitiquous at Camp Lejeune.

Our lawyers also speculate on the potential settlement amounts of bladder cancer victims and wrongful death survivors might recover in these lawsuits.

From the early 1950s to the late 1980s,  the drinking water supply at U.S. Marine Corps Base Camp Lejeune was severely contaminated with carcinogenic chemicals. Public health studies on the impact of this contamination have concluded that exposure to Camp Lejeune water caused increased rates of specific types of cancer. One of the cancer types with the strongest link to the Lejeune water supply is bladder cancer.

Thousands of former residents and employees of Camp Lejeune have developed bladder cancer as a result of the chemicals in the water supply. These victims have previously been barred from pursuing personal injury claims.

Today, however, the 117th Congress is very close to enacting a new law that will give victims of the Camp Lejeune water contamination a special right to bring negligence claims against the government and get compensation.

Since the early 1940s, Camp Lejeune has been one of the biggest and most active Marine Corps bases in the United States. Encompassing over 150,000 acres and 11 miles of shoreline on the south coast of North Carolina, Camp Lejeune is the biggest USMC base on the east coast and ranks behind Camp Pendleton in San Diego as the largest USMC base in the U.S.

Like most Marine Corps bases, Camp Lejeune is like a mid-sized town with a population of around 50,000. This population includes Marines and their families living in on-base housing units and serviced by schools, hospitals, and other facilities. Since the base opened, Camp Lejeune has operated its water supply system using a series of massive groundwater wells.

In the late 1980s, it was discovered that the water supply at Camp Lejeune was critically contaminated with industrial chemicals. The primary toxins in the Lejeune water were 2 industrial solvents perchloroethylene (PCE) and trichloroethylene (TCE).

Later research revealed that the Camp Lejeune water supply had been contaminated with these chemicals from August 1953 to December 1987. The extent and level of contamination were unprecedented with TCE and PCE being found at several thousand times the maximum safe limits.

We have long known that contaminated well water can cause bladder cancer. Risk factors for bladder cancer include certain genetic predispositions, schistosomal infection,  smoking, and exposure to certain chemicals. One of those chemicals that increases the risk of bladder cancer is PCE.

The severity of bladder cancer is described in the same progressive categories you see with other types of cancer:

There are many contributing factors to bladder cancer.

Yes. Bladder cancer is one of the cancer types that has the strongest link to the contaminated Camp Lejeune toxic water. About a dozen other types of cancer have also been linked including kidney and lung cancer.

The water contamination at Camp Lejeune and the USMC’s mishandling of it prompted public anger. This motivated the federal government to fund numerous scientific studies to evaluate the impact that the contaminated water had on the health of the people who lived and worked at Camp Lejeune.

The Agency for Toxic Substances and Disease Registry (ATSDR) is an investigative branch of the Centers for Disease Control (CDC). The ATSDR has been conducting extensive research and studies on the Camp Lejeune water disaster for 3 decades.

In 2014, an ATSDR Morbidity Study was published which detailed the results of a large-scale study into the health impact of the contaminated water at Camp Lejeune. The ATSDR Morbidity Study looked at health records for military personnel, their families, and civilian employees at Camp Lejeune during the time that the water was polluted. These records were compared to a control group from another USMC base (Camp Pendleton) where the water was not contaminated.

The ATSDR Morbidity Study concluded that the contaminated drinking water at Camp Lejeune was linked to an increased risk of bladder cancer. The study showed that former residents and employees at Lejeune who were exposed to TCE and/or PCE in the water supply displayed significantly higher rates of bladder cancer. This finding makes intuitive sense given that the bladder is the organ with the most significant interaction with drinking water.

But it was not just drinking water that caused bladder cancer.  TCE and PCE are absorbed through the skin from the gastrointestinal tract and by inhalation. Skin absorption will occur when washing, showering, or swimning with contaminated water. There is also inhalation exposure when water is boiled.

In 2012, the Environmental Protection Agency (EPA) published toxicologic reviews on TCE and PCE which found that both chemicals were carcinogenic to humans. A similar conclusion was reached by the International Agency for Research on Cancer (IARC) the following year. These conclusions were based largely on specific epidemiologic studies showing a clear association between PCE and bladder cancer.

This article in the American Journal of Epidemiology reported a high incidence of bladder cancer in an area of Winnebago County in Illinois. One of four drinking wells had been closed in that area due to contamination with TCE and other solvents.

A case-control study in Germany using a job-exposure matrix reveals a dose-response increase in bladder risk to PCE exposure.

Victims of the Camp Lejeune water contamination have never been able to get the justice they deserve. All previous civil lawsuits have been effectively blocked by a strict law in North Carolina. Now, however, Congress is about to fix this with the passage of new federal law that will permit Lejeune victims to bring civil claims.

The Camp Lejeune Justice Act provides for an uncommon carve-out that allows the military to bring file a Camp Lejeune Lawsuit against the government.  This new law to protect veterans’ rights is an uncommon departure from the long-standing ban on personal injury and wrongful death lawsuits against the U.S. government by service members that relates to military matter.  This law creates an exception to this law that was created by the United States Supreme Court in Feres v United States, 340 U.S. 135 (1950).

Camp Lejeune water victims now have the right to bring civil negligence claims against the federal government for injuries caused by the contaminated water. Claimants under the CLJA will still have the burden of proving their claims, but the CLJA has created a new, lowered standard of proof for establishing causation.

Under the CLJA, claimants can establish causation based on a single, valid, scientific study linking their alleged injuries to Camp Lejeune’s water. In the case of bladder cancer, several accepted studies (including the ATSDR study) have verified the link between bladder cancer and the Camp Lejeune water.

Still, Camp Lejeune victims want an estimate of the potential settlement amount of their lawsuit.  Because a civil lawsuit is about money in either a settlement or jury payout.   So we do this based on verdicts and reported settlements in prior cases involving bladder cancer (mostly failure to diagnose malpractice cases).

Based on these prior data points and the expected settlement amounts for Camp Lejeune lawsuits generally, our attorneys estimate that Camp Lejeune claims involving bladder cancer will have an average per person settlement payout range of $145,000 to $220,000.

The factors that would impact the settlement value of individual claims include the age of the victim, stage of cancer, the extent of exposure to Camp Lejeune water, and treatment outcomes. 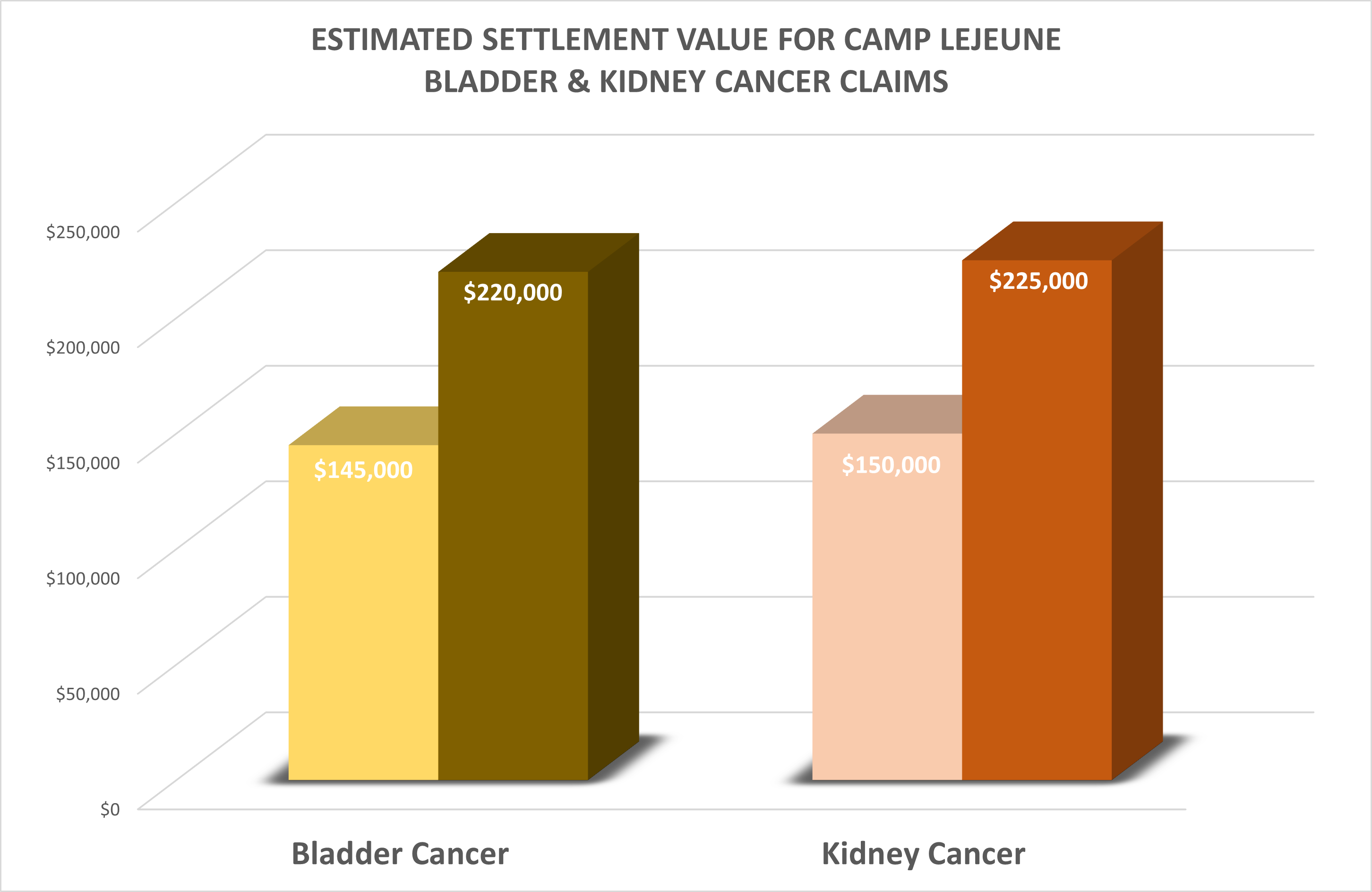 Our Bladder Cancer Settlement Amount Projections Might Be Low

The true settlement amount for Camp Lejeune bladder cancer lawsuits should be higher for two reasons.

First, the defendant in the Actos lawsuits vigorously disputed liability.  Here, the government presumptively assumes your bladder cancer is from Camp Lejeune.

An example of a recently filed Camp Lejeune bladder cancer lawsuit is Benson, et al. v. United States (7:22-cv-140). The Benson case presents a group of 5 individuals all of whom lived or worked at Camp Lejeune between 1953 and 1987 and were subsequently diagnosed with bladder cancer. Two of the plaintiffs are estate administrators bringing wrongful death claims on behalf of their loved one who lived or worked at Camp Lejeune. The other three plaintiffs are bringing the case in their own right.

The Complaint in the Benson case adopts the bare bones pleading strategy, which means it simply states the bare minimum to plead a cause of action under the CLJA. As a result, we don’t get any specific factual information about how long each plaintiff (or their decedent) lived at Lejeune or even whether they lived on base or worked there.

For each plaintiff, the Complaint simply alleges that the plaintiff (or their decedent) “resided, worked or was otherwise exposed for not less than thirty (30) days between August 1, 1953 and December 31, 1987, to water at Camp Lejeune, North Carolina[.]” The Complaint then alleges that each individual was “subsequently” diagnosed with bladder cancer “on a date before the enactment of the [CLJA].” One of the plaintiffs’ decedents (Gary Jessup) was diagnosed with bladder, kidney and liver cancer.

This bladder cancer lawsuit asserts a caused of action for each plaintiff under the CLJA and alleges that: “[a] causal relationship exists between each Plaintiff’s (or decedent’s) illnesses, including their bladder cancer and the contaminants each Plaintiff (or decedent) was exposed to in the Camp Lejeune water supply. The causal relationship is at least as likely as not.”

One way to project settlement amounts in Camp Lejeune bladder cancer lawsuits is to look at settlement amounts and jury payouts in lawsuits where the injury was bladder cancer. So these settlements and jury payouts give you a flavor of compensation amounts you might expect in these cases.  Arguably, with a less sympathetic defendant like the government – most of these cases are malpractice lawsuits – you might see even higher payouts.

Contact Us About a Camp Lejeune Bladder Cancer Lawsuit

If you (or a deceased family member) lived or worked at Camp Lejeune between 1953 and 1987 and you subsequently developed bladder cancer, call us today at 800-553-8082 to see if you have a compensation claim.  You can also get a free, no-obligation case review online.