Our lawyers are representing victims seeking to file a Camp Lejeune Parkinson’s disease lawsuit in all 50 states.

If you have a potential Parkinson’s disease claim after spending 30 days at Camp Lejeune from 1953 to 1987, call our legal team today at 800-553-8082 or get a free online no-obligation consultation.

Our lawyers feel strongly that the toxic water at the USMC Camp Lejeune military base in North Carolina caused thousands of people to develop Parkinson’s disease.  As we all know, the water supply at Camp Lejeune was polluted with extremely high levels of industrial solvents for over 3 decades spanning from the early 1950s to 1987.

Following the discovery of this contamination, the federal government has directed several public health agencies to study and evaluate the impact that this contamination had on the long-term health of Camp Lejeune residents and employees.

These studies have recently concluded that Parkinson’s disease is one of the long-term health conditions that may have been caused by exposure to the chemicals in the drinking water at Camp Lejeune.

Camp Lejeune is a major Marine Corps base in North Carolina that has been in use since World War II. From 1953 through 1987 the water supplied to Camp Lejeune was tainted with dangerously high levels of toxic chemicals.

The two primary contaminants in the Lejeune drinking water supply during this period were perchloroethylene (PCE) and trichloroethylene (TCE). Benzene was also named as an additional chemical in the water at Lejeune.

PCE and TCE are powerful chemicals that were used as solvents in various industries including dry cleaning and cleaning of metal weapons and equipment. The levels of PCE and TCE in the Camp Lejeune water system were several thousand times higher than the maximum safe limits set by public health agencies.

Later studies into the contamination have estimated that over 1 million people (including former Marines, their families, and civilian employees) were exposed to the Camp Lejeune water over the years.

Parkinson’s Disease impacts approximately 1% of the United States population above the age of 55 years old.  The risk of Parkinson’s increases with age.  The average age of onset is around 61 years old. The average duration of the disease is about 13 years.  Many of the Camp Lejeune Parkinson’s disease cases our lawyers are reviewing are wrongful death claims because the parent or spouse was eventually lost to Parkinson’s or conditions secondary to it.

Originally, Parkinson’s disease – and multiple myeloma, end-stage renal disease, and scleroderma –  were not included on the list of diseases presumptively associated with exposure to contaminants in the water supply at Camp Lejeune. The government thought there was insufficient evidence for causation because they did not yet fully understand the neurobehavioral effects of Camp Lejeune contaminated water.

But that changed. In 2012, Congress passed a new law that directed the Department of Veteran’s Affairs (VA) to provide special health benefits to former residents of the Camp Lejeune Marine Corps base. These special additional benefits were intended for treatment related to medical conditions and diseases that these veterans may have developed from exposure to the contaminated water at Camp Lejeune. 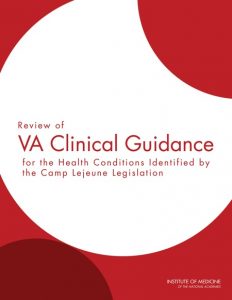 To help the VA administer these benefits it became necessary to determine what diseases and health conditions were potentially related to the Camp Lejeune water contamination. To identify what diseases were linked to the Lejeune water, a special panel of experts was formed and called the Committee on the Review of Clinical Guidance for the Care of Health Conditions Identified by the Camp Lejeune Legislation (the “VA Committee”).

So for disability compensation, VA amended its final rule – 38 C.F.R. §§ 3.307, 3.309 – in 2017 to establish a presumption of service connection for Camp Lejeune veterans diagnosed with Parkinson’s disease.

So one of the most significant conclusions made by the VA Committee was that there was sufficient evidence to indicate that Parkinson’s disease may be associated with exposure to the water at Lejeune. The VA Committee made this conclusion based on evidence from four different sources which included the ATSDR mortality studies:

The VA Committee finding from 2015 continues to reflect the scientific consensus regarding the connection between Parkinson’s disease and Camp Lejeune.

The Camp Lejeune Justice Act (CLJA) was merged into a larger bill called the Honoring Our Pact Act and signed into law by President Biden on August 10, 2022. The CLJA gives Camp Lejeune victims a 2-year window to file tort claims for injuries related to the water contamination.

The law specifically prevents the use of the North Carolina statute of repose to dismiss these cases. Plaintiffs will still need to prove their claims, but the CLJA adopts a lowered standard of proof which states that causation can be established if the scientific evidence on both sides of the debate is essentially equal.

The Parkinson’s Disease Link Is Clear

The VA Committee findings and the Goldman Study could potentially be enough to establish causation in a Camp Lejeune claim involving Parkinson’s disease, at least under the lowered standard of proof established by the CLJA

The primary toxic chemicals in the Camp Lejeune water were the chlorinated solvents TCE and PCE. The scientific and medical evidence establishing a causal relationship between chemical solvents and Parkinson’s disease has advanced significantly over the last decade.

In the early 2000s, Camp Lejeune water contamination’s neurological effects were not well understood.  many scientists strongly suspected that chronic exposure to chemical solvents (particularly TCE) might cause early onset Parkinson’s disease. There were even a handful of early clinical studies that supported this connection. However, the link between Parkinson’s disease and chemical solvents like TCE remained inconclusive until a wave of new research emerged.

A study published in the June 2021 issue of the medical journal Neurobiology of Disease reported on the results of animal testing on the effects of TCE exposure. The study found that rats who were subjected to chronic TCE exposure displayed chemical changes and reactions in their brains that are known to be associated with Parkinson’s disease. Specifically, the study noted that TCE exposure caused elevated LRRK2 kinase activity and dopaminergic neurodegeneration.

Another study entitled Trichloroethylene, a ubiquitous environmental contaminant in the risk for Parkinson’s disease, was published in March 2020 in the journal Environmental Science. Processes & Impacts. These researchers reviewed the specific neurotoxic mechanisms of TCE in the context of selective vulnerability of dopaminergic neurons and made similar conclusions about the TCE link to Parkinson’s disease.

The scientific research on the connection between exposure to TCE and Parkinson’s disease is continuing. The Michael J. Fox Foundation is currently funding a major study called the Bay Area Solvent Study – Symptoms (BASS-S). This long-term study will assess the impact of auto mechanics in the San Francisco bay area with long-term occupational exposure to TCE and other solvents.

What Settlement Amounts Should Parkinson's Disease Victims Expect in a Camp Lejeune Settlement?

Our attorneys updated these settlement compensation payout predictions on September 1, 2022 to revise these projections upward, reflecting how strong our law firm believes Camp Lejeune Parkinson’s disease lawsuits to be.

But, let’s talk about some important caveats. When lawyers project settlements amounts this early in the litigation – like we just did here – be skeptical.  It is too early to say for certain what the average settlement payout will be for Camp Lejeune water contamination lawsuits. This is why we hedge our bets with a range of settlement amounts.

When Will the Camp Lejeune Parkinson's Disease Lawsuits Settle?

Our lawyers believe the JAG will want offer reasonable settlement compensation payouts early for the Camp Lejeune lawsuits that could lead to a large verdict and for injuries that are strongly linked to contaminated water. Parkinson’s disease fits both criteria. Parkinson’s cases will have among the highest, if not the highest, average settlement values, and the disease is strongly linked to the contaminated water at Lejeune.

So we could see large numbers of Parkinson’s disease claims resolving high settlement amounts in the six-month administrative window when a demand is made on the Navy for settlement.

The Complaint filed in the Cline case adopts the minimal pleading style, which means it contains only those facts necessary to set forth the cause of action and nothing more. As a result, it does not provide very specific or detailed information about how long the plaintiffs were at Camp Lejeune, where they lived, or whether they were servicemembers, family, or employees.

Instead, the Complaint simply states that each plaintiff, Sandra Cline and Mark Perry, lived or worked at Camp Lejeune for a minimum of 1 month between August 1953 and December 1987. The Complaint further alleges that during this time the plaintiffs were exposed to toxic chemicals in the water including TCE, PCE, vinyl chloride, and benzene. Finally, the Complaint alleges that at some point after her time at Lejeune Sandra Cline was diagnosed with “Parkinson’s disease and neurologic disorders.” Plaintiff Mark Perry was similarly diagnosed with Parkinson’s disease.

Parkinson’s disease is identified as one of the handful of diseases that the VA has classified as presumptively connected to the contaminate water at Camp Lejeune. This means that there is strong and compelling scientific evidence of an association between the toxic Camp Lejeune water and higher rates of Parkinson.

Under the lower equipoise causation standard adopted by the CLJA, it will be very difficult for the government to oppose causation in cases involving “presumptive” Camp Lejeune diseases such as Parkinson’s disease.

The Cline case was one of many Camp Lejeune lawsuits that were immediately filed when the CLJA was passed on August 10, 2022. These cases are referred to as “legacy case” because they were Camp Lejeune cases that were initially filed years ago, only to be dismissed in 2016 based on the application of North Carolina law. Since the plaintiffs in these lawsuits already submitted administrative claims prior to filing the first time, they were eligible to re-file immediately after submitting a new claim.

Contact Us About a Camp Lejeune Parkinson’s Disease Lawsuit

If you lived or worked at Camp Lejeune between 1953 and 1987 and were subsequently diagnosed with Parkinson’s disease, contact our office today to see if you may be eligible to file a claim.

Contact our Camp Lejeune lawyers today.  We provide free consultations. Call 800-553-8082 or get a free no-obligation online consultation. Our attorneys only get paid if you do.