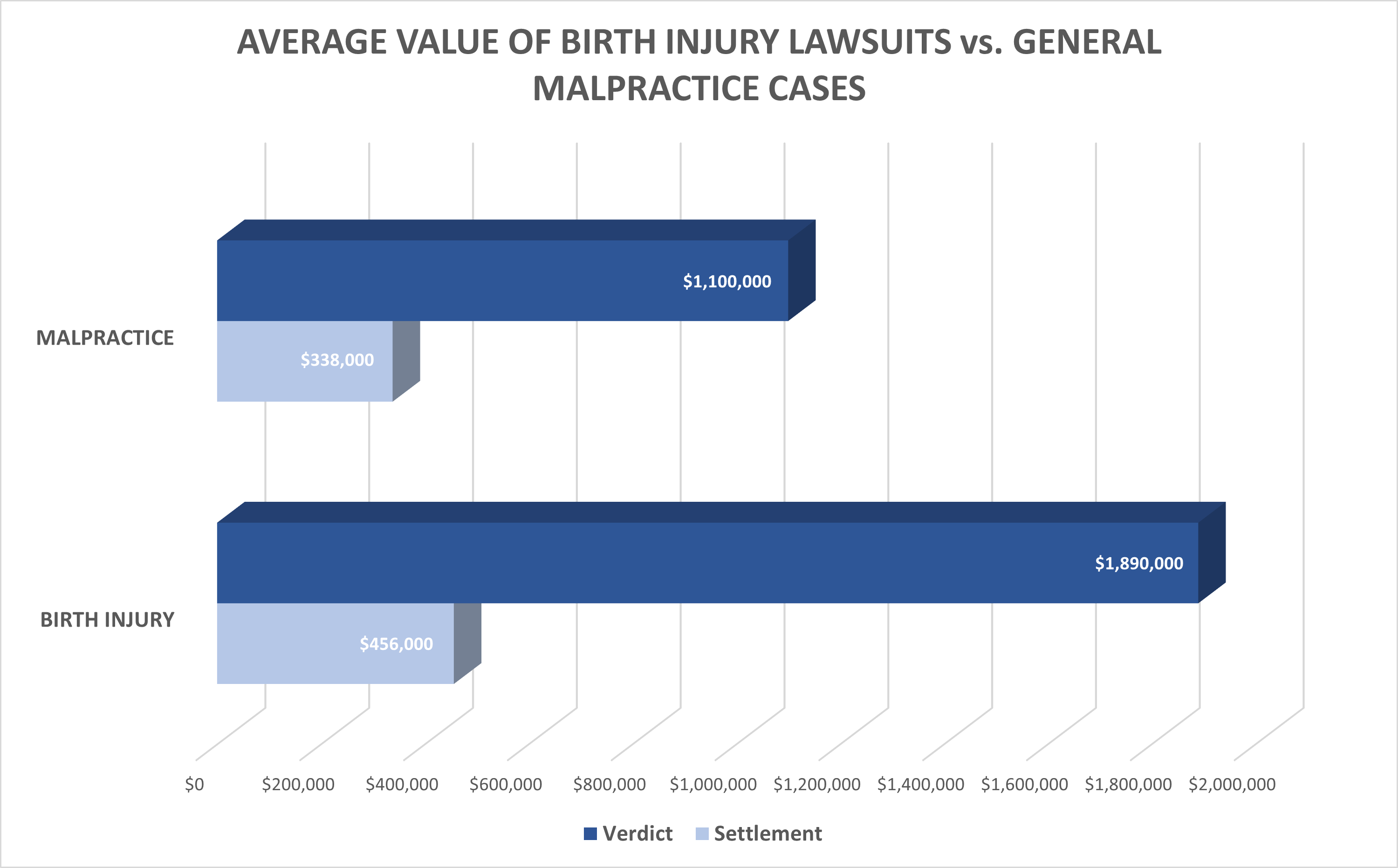 These averages are based on national settlement and jury verdict data across the U.S. The average settlement and verdict amounts for birth injuries and medical malpractice cases generally tend to vary significantly depending on what state the case is in. The average payout in malpractice cases in Maryland (and other states) is much higher than the national average and can be 3 or 4 times higher compared to certain states.

Another thing that is important to note is that the information on settlement amounts in birth injury malpractice cases will always be incomplete because it only includes settlements where the amount is publicly reported. Most payments are kept confidential, so we never determine how much the plaintiffs received. This is particularly true for the more significant, high-value settlements, which rarely get publicly reported. This means that the average and median settlement amounts for birth injury cases are underestimated because they do not include the highest settlements.

Why Do Birth Injury Lawsuits Have Such a High Value?

Two primary factors work together to push the payout value of birth injury cases higher than all other medical malpractice claims: (1) the severity and nature of the injuries; and (2) the scope of economic damages.

A primary factor driving the payout value of birth injury malpractice cases is that they frequently present some of the most devastating types of injuries and the saddest of all circumstances. Birth injuries involving the brain, such as HIE, can leave a child with permanent disabilities such as cerebral palsy.

Severe cases of cerebral palsy can leave a child unable to walk and dependent on a wheelchair or mobility aid for the remainder of their life. Many children with cerebral palsy cannot perform even basic functions such as feeding themselves or getting dressed. Children who suffer these types of birth injuries may require daily medical care and assistance from birth to the rest of their lives.

Even mild or moderate cases of cerebral palsy usually require a lifetime of regular medical care and assistance. Physical therapy and occupational therapy, electric wheelchairs, walkers, mobility aids, and special education services are often basic requirements for children with moderate CP. A child born into these circumstances can make a very sympathetic plaintiff.

The other factor that gives birth injury malpractice lawsuits such a high potential value is that these cases tend to present significant economic damages. Most birth injury cases involve claims for economic damages covering the child’s adult lifespan. Many states put caps on the maximum amount of “non-economic” damages that can be awarded for pain & suffering. Economic damages, however, are NOT subject to these maximum caps, so if you have a case where you can claim extensive economic damages, it will drive up the value. The two main components of economic damages are always (a) future lost income (or loss of future earning capacity) and (b) past and future medical expenses.

In a typical medical malpractice case, the scope of economic damages that the plaintiff can claim is often limited. For example, if you have a 55-year-old plaintiff who can never work again because of their injury, they can only claim 10 years of lost future income. By contrast, the plaintiff in a birth injury case can often claim over 40 years of lost or reduced future earnings. This means lost future earnings capacity alone can add up to several million.

Over the last few decades, many states (including Maryland) have sought to curb excessive medical malpractice awards by enacting laws that put maximum caps on damages that can be awarded in these cases. These caps typically only apply to non-economic damages (i.e., pain & suffering). Economic damages are not subject to maximum caps in Maryland or elsewhere. This increases the potential settlement amounts in a birth injury case because birth injury malpractice claims tend to be very heavy on economic damages.

Cerebral palsy is a neurologic disorder caused when the baby loses oxygen for an extended period during labor and delivery. Cerebral palsy can be a severe and permanent injury, so the settlement value of cerebral palsy lawsuits tends to be very high.

Erb’s palsy is a common birth injury resulting from damage to nerves in the baby’s shoulder and neck during delivery, causing paralysis in the arm. Erb’s palsy is one of the less severe types of birth injuries compared to things like cerebral palsy, and these cases are therefore at the lower end of the value spectrum.

Birth injuries involving the brain, such as HIE, are severe and potentially fatal injuries that often leave a child permanently disabled. Cerebral palsy is often the result of these types of injuries during delivery, so they are high-value cases.

We can help you. Our law firm handles birth injury claims throughout the country, often teaming up with lawyers in your area. You get two lawyers for the prices of one.  We will treat you with the caring and compassion you deserve after all your child and your family has been through.  Call us today at 800-553-8082 or connect with us online for a free and immediate case evaluation.  We will never ask you for money – we are only compensated if you get a jury payout or settlement.