Over one-thousand women have filed a Paragard IUD lawsuit claiming that they were injured when a design defect in the popular IUD caused it to fracture during removal and leave foreign objects inside their bodies.

The Paragard lawsuits in the federal courts have been consolidated into a new Paragard MDL in the Northern District of Georgia. The crux of the class action Paragard suit is that the device is prone to break inside a woman’s body because the IUD is not sufficiently flexible.

In this post, we give a 2022 Paragard lawsuit update. Our lawyers also speculate on how much a Paragard lawsuit might be worth if the litigation is resolved in a global settlement with the manufacturers.

June 2022: After moving along very slowly over the last 2 years, the Paragard MDL was actually one of the most active mass torts in the last month. Between May 15 and June 15, a total of 177 new Paragard lawsuits were transferred into or directly filed in the MDL bringing the current pending case count up to 1,195. This was one of the largest increases in new cases in any MDL. It is also a stark contrast to last month when we only saw 5 new Paragard lawsuits added to the MDL. Our lawyers are not exactly sure what accounts for this sudden uptick in new Parargard IUD lawsuits.  It’s possibly due to big blocks of cases being filed by various lawyers after waiting on them for a long period of time.

Meanwhile, at the last monthly status conference, the MDL Judge heard arguments on the Plaintiffs’ challenges to the documents produced by the defendants in response to discovery. The status of the enabling order for the Plaintiff Fact Sheet was also addressed by Paragard attorneys on both sides.

May 2022: Plaintiffs’ Paragard lawyers are itching to get one of the 1,018 Paragard lawsuits that have been filed into a courtroom. If successful, trials lead to larger Paragard settlement amounts and those settlements will come faster.  This is the goal of the litigation from the plaintiffs’ lawyer’s perspective.  To get there, the attorneys have to get through the pre-trial discovery process to show Judge May that the parties are ready for trial.  Hopefully, the status conference before the judge next week pushes that ball forward.

The pace of the litigation has slowed, which might help push the ball toward settlement.  Our Paragard attorneys still get calls regularly from women who have had their IUD break during removal. But new Paragard lawsuit filings in the class action have dropped considerably.

Throughout the first 16 days of May, only five new Paragard IUD defect lawsuits have been transferred into the MDL class action. In fact, only two new Paragard cases were added in April. Does this mean that the lion’s share of Paragard injury victims have already called a lawyer?  It might.  Check back in next month and let’s see if the trend continues.

April 2022: The next monthly status conference in the Paragard MDL will be held next week. The Paragard class action lawsuit continues to grow.  Quietly. If the recent pace of new lawsuits continues, the revised number of total pending cases in the MDL could surpass 1,000.

March 2022: There are now almost 900 Paragard lawsuits in the MDL. On March 22, 2022 (today as of the time of this writing), Judge Leigh Martin May will hold the March status conference in the Zantac MDL today. Agenda items include: (a) an update on the number of pending Paragard IUD lawsuits in federal and state courts, (b) timeline on draft fact sheets, and (c) responses to the plaintiffs’ first set of requests for the production of documents from the defendants.

February 2022: The Paragard class action MDL continues to take shape as the MDL judge is expected to rule on a discovery dispute over certain questions on the proposed plaintiffs’ fact sheets. Defense lawyers objected to certain sections of the fact sheet and judge May held a hearing on the matter at the end of January. A ruling on the objections is expected shortly.

December 2022: The Paragard MDL now has a total of 736 pending cases. On December 14, 2021, the MDL Judge held the final status conference of the year to address various housekeeping matters including the format of the Short Form Complaints for incoming cases and the status of related cases awaiting transferred into the MDL. At the next status conference, the parties are expected to present a proposed Plaintiff Fact Sheet and/or Plaintiff Profile Forms for approval.

About the Paragard Lawsuits

The Paragard is a type of birth control known as an intrauterine device (IUD). The Paragard is a Y-shaped device about the size of a quarter with a copper coil around the center. The IUD is placed at the base of the uterus by a doctor. It remains there for as long as 10 years, providing continuous protection against pregnancy. The Paragard was designed to be easily removed at the doctor’s office by pulling on a removal cord. 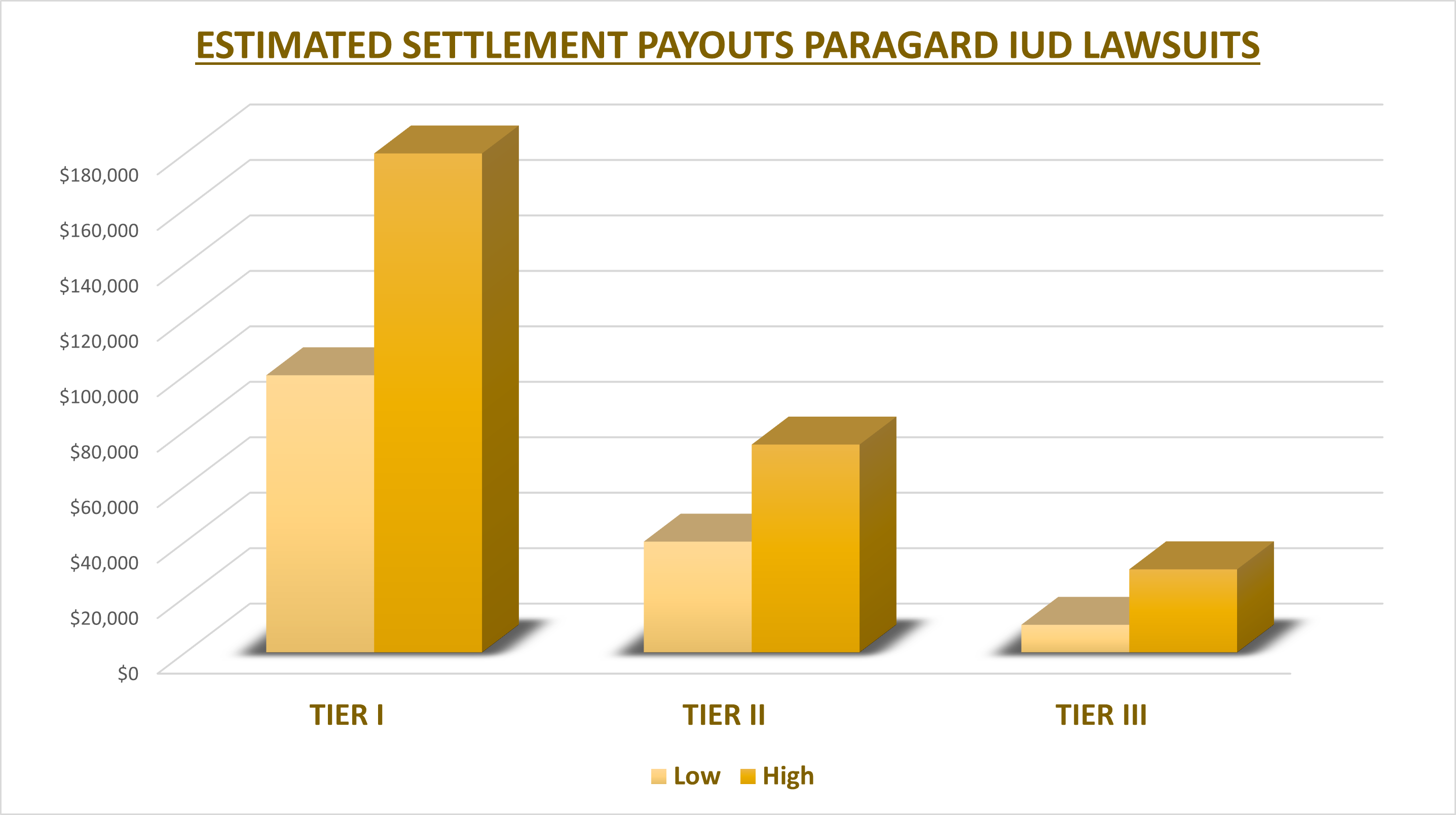 Unfortunately, the design of the Paragard copper IUD has a hidden defect which has led to problems during the removal process for many women. The plastic arms at the base of the Paragard are supposed to flex upwards when the device is pulled out for removal. In a large number of cases, however, the plastic arms become rigid and break off inside the patient during removal. This results in sharp pieces of plastic inside the woman’s uterus.

Failure to Warn of Paragard Complications

There is also a failure to warn component to the Paragard class action lawsuit.  Plaintiffs claim the defendants knew Paragard could cause serious harm to women due to its proclivity to break in utero or during removal but that the defendants failed to adequately warn doctors and patients of the risk.

How could the defendants have known of the risks of Paragard? Between 2009 and 2021, the defendants received reports of over 2000 Paragard breaks.  This information never made its way into a meaningful warning for doctors and patients.

As the number of women who suffered health consequences as a result of the Paragard fracturing during removal, they began to file lawsuits against the manufacturers of Paragard – Teva Pharmaceuticals and CooperSurgical. The number of Paragard lawsuits around the country was enough to create a new Paragard MDL. The Paragard MDL now has almost 876 cases in the Northern District of Georgia as of March 2022.

Paragard IUD Lawsuits Will Be Resolved in a Global Settlement

The Paragard lawsuits will eventually be resolved with a global settlement.  This is how almost all product mass torts are resolved that are not dismissed by a judge. The Paragard MDL was formed at the end of 2020 and new Paragard cases continued to get filed and added into the MDL. The MDL judge will oversee a process of consolidated “group discovery” between the plaintiffs and defendants. The focus of the discovery process will be on the design flaw in the Paragard and what the defendants knew. 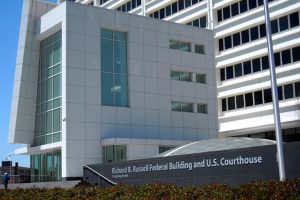 When the process of consolidated discovery in the Paragard MDL is completed, the litigation will move into the bellwether trial phase. This is where jury trials are conducted in a select handful of individual Paragard chosen by the parties.

The results of these initial bellwether “test trials” have a big impact on the litigation. They usually dictate how quickly the defendants will negotiate a global settlement and how much the settlement payouts will be.

The best way to understand how global settlements work in the MDL process is to consider a simplified hypothetical example. Let’s say Acme Company is defending 10,000 lawsuits in an MDL. The class action complaint alleges that its medical device was defective and caused patients to suffer internal organ damage. The Paragard class action MDL goes through 18 months of discovery. At the close of discovery, 20 plaintiffs are selected by the parties for bellwether trials. The plaintiffs pick 10 and Acme picks the other 10.

Over the next six months, jury trials are completed in three of these ten cases. The first case results in a $5,000,000 verdict. The second case (one of the defense picks) results in a defense verdict. The third case ends with a $1,200,000 verdict for the plaintiff. Based on these results, Acme decides to settle the remaining 10,000. After 6 months of negotiation, a global settlement agreement is approved by the MDL judge.

Under the settlement, Acme agrees to pay $1 billion to settle all 10,000 pending cases. If divided evenly, this would result in a payout of $100,000 per plaintiff. But the settlement creates a complicated tiered system. The settlement plan ranks each plaintiff based on the severity of their injuries (and other factors). Plaintiffs ranked in the highest tiers get larger payouts and those in the lower settlement tiers get smaller payouts.

It is way too early to know with any degree of certainty how much the settlement payout in the Paragard lawsuit might be. It is not too early, however, to make an educated guess about the potential settlement value of these cases based on settlements in prior mass tort cases with similar allegations.

Based on global settlements in prior mass tort cases involving defective medical devices and internal damages, we believe that Paragard cases in the highest settlement tier will have a value between $100,000-$180,000. Paragard plaintiffs in the second tier can probably expect payouts in the range of $40,000-$75,000. There will probably be a lower, third tier of plaintiffs who get smaller payouts ranging from $10,000-$30,000.

It is impossible to emphasize how speculative these Paragard individual settlement compensation payouts are.  Because all these projections make the leap of assuming that a judge will allow the Paragard lawsuits to go to trial.  Before these cases ever get to a jury, the MDL judge will have to decide whether there is enough scientific proof that a reasonable jury could accept.

It is impossible at this stage of the game to access the scientific strength of the lawsuits because the litigation is so new and the science is developing quickly.  But with so many women with the same or similar complaints, you have to think the science will support what we are seeing.

So our Paragard attorneys believe the science supports the plaintiffs’ claims that the design was defective (and the defendants knew it and did not tell anyone).

Each victim who has filed a Paragard class action lawsuit had a Paragard break while it was still inside her body. If this happened to you, call a Paragard lawyer.  You can reach us at 800-883-8082 or get a free online consultation.  You pay nothing unless you get a recovery.