Parents around the country have been filing lawsuits against Tylenol manufacturers and retailers alleging that the use of the popular pain medication during pregnancy caused their children to develop autism. These lawsuits are based on new scientific research showing a link between the use of Tylenol (or acetaminophen) during pregnancy and autism.

Last week, the lawsuits alleging that the use of Tylenol or generic acetaminophen during pregnancy caused autism were consolidated into a new class action MDL. Now all Tylenol autism lawsuits in federal courts will be consolidated in a new MDL in the Southern District of New York. This is a significant step forward in the Tylenol autism litigation.

Tylenol Use During Pregnancy Linked to Autism

Tylenol (acetaminophen) is one of the world’s most popular and widely used over-the-counter pain relief medications. Nearly a quarter of the adult population in the U.S. uses acetaminophen products weekly and more than 25 billion doses are taken each year.

Acetaminophen has always been viewed as a completely safe drug, with virtually no potential health risks or hazards. The little-known truth, however, is that acetaminophen is one of the least understood drugs in the medical field. Despite its ubiquitous presence and reputation for safety, scientists have no idea exactly how or why acetaminophen works on a chemical level.

Despite the mysterious nature of acetaminophen, manufacturers have marketed their acetaminophen products as the safest pain-relief option during pregnancy. This has made Tylenol the most widely used pain relief option among pregnant women in the U.S. 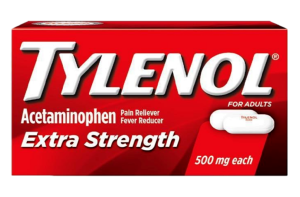 Over the last decade, a steady stream of scientific research began to suggest that using large doses of acetaminophen during pregnancy may adversely impact fetal development. This research specifically indicated a link between Tylenol use during pregnancy and higher autism rates. These studies were ignored by manufacturers and went largely unnoticed by the medical community.

The Consensus Statement raised general awareness of the connection between Tylenol use during pregnancy and autism. It also prompted many parents to file product liability lawsuits against retailers and manufacturers of acetaminophen products. The parents in these Tylenol autism lawsuits alleged that the use of acetaminophen during pregnancy caused their child to develop autism. They also allege that the drug manufacturers were aware of the link between in-utero exposure to acetaminophen and autism and negligently failed to warn about that risk.

The first wave of Tylenol autism lawsuits began getting filed in the wake of the Consensus Statement publication in 2021. By June 2022, at least 20 Tylenol autism lawsuits were pending in federal courts across the country and a group of plaintiffs filed a motion asking the Judicial Panel on Multidistrict Litigation (JPML) to consolidate these cases into a new “class action” MDL.

In an MDL, lawsuits across the country involving similar allegations against a common group of defendants (such as product liability claims involving a specific drug such as acetaminophen) are grouped before a single federal court judge. Once consolidated together into an “MDL”, the combined cases go through a consolidated process of pretrial discovery. A committee of plaintiffs’ lawyers is appointed to make decisions on behalf of all the individual plaintiffs.

In most class action MDLs, a small handful of individual cases are selected to go to trial. These are called “bellwether” trials and they are intended to test the strength of the cases as a whole and give both sides an idea of what to expect if they went to trial. Based on the results of the bellwether trials, some type of global settlement is usually negotiated.

In many cases where a class action MDL is sought, the defendants in the lawsuits are in favor of having the cases consolidated into an MDL. Consolidation can be very beneficial for defendants as it enables them to avoid having to defend hundreds of individual cases involving identical allegations.

In the Tylenol autism lawsuits, however, all of the various defendants (which included major retailers such as Walmart and CVS) were strongly opposed to MDL consolidation. Almost all of the major defendants filed briefs with the JPML opposing the MDL motion filed by the plaintiffs.

Only a week after hearing oral arguments, the JPML ruled that consolidation of the Tylenol autism lawsuits was necessary and appropriate. The JPML consolidated all acetaminophen autism lawsuits in federal courts into a new class action MDL (In re: Acetaminophen ASD/ADHD Prod. Liab. Lit., MDL No. 3043). 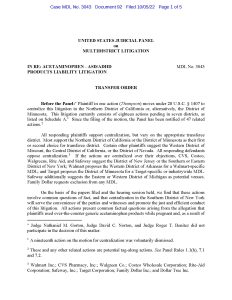 As of now, the new Acetaminophen autism MDL has about 50 pending cases. That is more than double the number of cases cited in the consolidation motion, but it is still relatively small for a class action MDL. The number of cases is expected to grow very rapidly over the next year, however, as more parents learn about the connection between Tylenol use during pregnancy and autism.

Our national product liability lawyers are accepting Tylenol autism lawsuits on behalf of parents and guardians of children who were diagnosed with autism after significant prenatal exposure to Tylenol or generic acetaminophen.

Contact our Tylenol autism lawyers today at 800-553-8082 or get a no-obligation, free online consultation.