C.R. Bard is defending over 16,000 hernia mesh lawsuits alleging that its mesh devices were defective and resulted in injuries and complications for thousands of hernia surgery patients. Our hernia mesh lawyers are handling these claims in all 50 states.

This post will provide news and updates on the hernia mesh lawsuit against C.R. Bard and a look at the current status of the Bard hernia mesh class-action MDL as of April 16, 2022.

If you have a potential claim, call a hernia mesh attorney – preferably us, but any qualified attorney – today.  Because the statute of limitations imposes a deadline to sue that you do not want to miss.  You can reach us at 800-553-8082.

Before we get to the nuts and bolts of the various class action hernia mesh lawsuit against Bard, let’s start with what most of you are coming to the website for – to get the latest news and updates in the hernia mesh litigation.

I was excited when Antonio Milanesi won the second bellwether hernia mesh trial.  But not entirely satisfied. The verdict of $255,000 was ridiculous in comparison with Mr. Milanesi’s suffering.

Lawyers on both sides have filed post-verdict motions challenging the outcome of the trial. The defendants filed a Motion for Judgment as a Matter of Law claiming that the plaintiffs failed to establish the elements for causation or design defect under applicable Florida law.

The plaintiffs’ hernia mesh lawyer filed a Motion for a New Trial on Damages. The legal argument is that  the trial judge failed to properly explain to the jury that the defense had the burden of proof on mitigation of damages.  The likely scenario for the low jury payout is the jury blamed the surgeon who did the initial procedure.  Plaintiff’s attorney is seeking the dream scenario: a new trial on damages only.

Both sides are due to file responses tomorrow.

As of May 16, the C.R. Bard MDL has 18,803 active cases. The second bellwether trial resulting in a $250,000 verdict ended over a month ago. But hernia mesh lawyers still don’t have a date for the next bellwether trial, and only three new cases have been added this month.

Frustratingly, there is still no date set for the third bellwether hernia mesh trial. There is hope Bard offers reasonable settlement amounts.  But there is nothing concrete.  We will update you when there is a development.

Hernia mesh victims have been visiting this page for the latest hernia mesh news and updates over the last few weeks have come up empty.  Not much is happening.  We will get another trial date at some point but that has not happened.  Our lawyers expect a trial date in October 2022 for the third bellwether, but the exact date has not been set.

The Johnson & Johnson Ethicon Physiomesh hernia mesh lawsuits have settled.  This might have some impact on the Bard lawsuits.  But, on another level, the Bard hernia mesh claims are very different than the Physiomesh claims.

VERDICT: $250,000 to Mr. Milanesi; $5,000 to his wife.  Plaintiff won on his defective design count; Ms. Milanesi brought a loss of consortium claim.  A larger verdict would have been nice. But if each plaintiff in this litigation were to receive a $255,000 settlement, then Bard is paying $4 billion to resolve every hernia mesh lawsuit that has been filed in the federal class action.  And many hernia mesh lawsuits allege injuries far more grave than Mr. Milanesi’s.

From our conversation with victims, there is understandable disappointment in the verdict’s size.  You will see the same if you wade into the comments below.  But you have to understand that the bellwether impact is more about whether you win or lose than the size of the verdict.

Importantly, Bard blamed the original surgeon for the choice of a large Ventralight. It may well be the verdict was less because the jury believed that some of the responsibility for the plaintiff’s injuries rested with that surgeon. Looking at this verdict from that lens is more encouraging because Bard will not have the “blame the doctor” defense in most cases.  So do not assume that the same jury would have awarded $255,000 in your case.

But the size of the jury’s payout probably tells us something we already knew. Some of these claims will be a close-call case for juries. Plaintiffs will win and lose hernia mesh suits in trial, at least in Becton Dickinson/C.R. Bard/Davol mesh lawsuits.  The parties will eventually fashion settlement amounts around that reality.

This is the day hernia mesh victims have been waiting for. The defendants have rested their case in the Milanesi trial in Ohio.  The jury deliberated for two-and-a-half hours yesterday after closing statements.  The jury is set to resume deliberations in 15 minutes.  We will likely… get a verdict today in this crucial hernia mesh lawsuit.

As of 3:06 p.m., we have no verdict. The jury has posed two questions to the judge so far.

The hernia mesh trial is moving along slowly.  Seven witnesses have testified in the first nine days  Apparently, Bard’s defense lawyers missed  Trial Advocacy 101 where future attorneys learn to make their best points on cross-examination quickly and get out. Dr. Krpata could have confessed to shooting JFK by the end of his second day of testimony and no one would have noticed  The first four days of trial are over and only two witnesses have testified, one by videotape – Davol’s (Bard subdivision) president.

The trial is set to last three weeks but our hernia mesh lawyers predict it will extend beyond next Friday.

The Milanesi trial began yesterday. Not much has happened other than the selection of the jurors who will hear this hernia mesh lawsuit.

We are less than two weeks away from the Milanesi case that was reset for trial on March 21, 2022.  All the energy in this litigation is going into that trial from attorneys on both sides.  I don’t get the feeling there will be many bellwether trials in the Bard hernia mesh lawsuit. So every trial will reverberate in the final settlement compensation payouts victims see in the Bard hernia mesh lawsuits.

Today was supposed to be a big deal because it was to mark the beginning of the next hernia mesh lawsuit that is going to trial.  The case of Antonio Milanesi v. C.R. Bard begins today in Ohio before Judge Edmund A. Sargus. This is the biggest trial in this litigation and will be important for future mesh lawsuit settlement amounts. But the judge postponed the trial.  No new date has been set. But our attorneys expect the new hernia mesh lawsuit trial will begin this winter.

Last month, Round 1 of the bellwether trials in the C.R. Bard hernia mesh litigation resulted in a surprising victory for the defense. After a 22-day long trial for Steven Johns, a federal court jury in Dayton, OH, ruled in favor of the defendants on all claims. It was a total win for Bard and Mr. Johns’ received nothing.

Plaintiffs’ hernia mesh lawyers are saddened and victims are wondering what this means for the future of the lawsuits against Bard.

Everyone needs to take a deep breath.  This victory in this first test trial, however painful,  will likely have a minimal impact on the eventual outcome of hernia mesh litigation.

The same thing happened 10 years ago in the Kugel Mesh litigation (a predecessor to the current hernia mesh litigation). Bard also scored a surprise victory – at least to plaintiffs’ attorneys – in the opening bellwether trial. But the second bellwether trial generated a $1,500,000 verdict for the plaintiff. This immediately prompted Bard to negotiate a global settlement of all the remaining cases. We could see that pattern repeat itself in this litigation.

C.R. Bard Inc. (now a subsidiary of Beckton-Dickson) is a medical device company based in New Jersey. For at least the last two decades, Bard has been the leading manufacturer of hernia mesh devices. A hernia mesh implant is a small artificial screen or mesh that is used during hernia repair surgery to help reinforce surgically repaired muscle walls.

These new mesh implants are made out of a special type of plastic called polypropylene and that plastic mesh is covered with a coating designed to create a barrier and prevent the mesh from attaching to nearby organ tissue. Unfortunately, the design of Bard’s hernia mesh implants had flaws that caused serious complications and adverse health consequences for many patients. 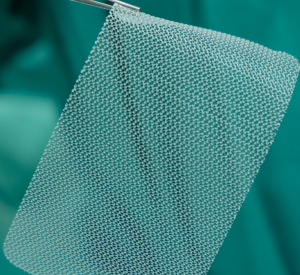 Instead of being inert biologically inert inside the body, the material and/or coating in Bard’s mesh devices were incompatible with the immune system in some patients which leads to a ton of health problems.

After the mesh was implanted, many patients would have a severe immune response causing inflammation and pain. In other cases, the coating on the mesh would dissolve, allowing the mesh to adhere to nearby tissue in the bowel or other organs.

Over the last 5-6 years, thousands of hernia mesh product liability lawsuits have been filed against C.R. Bard. These lawsuits allege that Bard’s polypropylene mesh products were not adequately tested before being released and had design flaws that made them unsafe for certain patients.

The Bard Hernia Mesh MDL (In re: Davol, Inc./C.R. Bard, Inc., Polypropylene Hernia Mesh Products Liability Lit. – MDL-2846) was created in the Southern District of Ohio. There are currently 3 different hernia mesh MDLs involving different medical device companies, but the Bard MDL is the largest of the 3 with over 12,000 cases.

Like all the other hernia mesh MDLs, the progress of the Bard MDL has been slow compared to other mass torts. Many of the 15,136 plaintiffs in the Bard litigation have had their cases pending for 5 years or more.  (If you are reading this and you are frustrated, I get it.) The timing of the COVID pandemic is the main reason for this slow pace. The shutdown of the federal court system last year happened just when the Bard MDL was reaching its final stages.

The result in the current bellwether trial will likely dictate the amount of settlement money plaintiffs in the Bard hernia mesh litigation will end up getting. 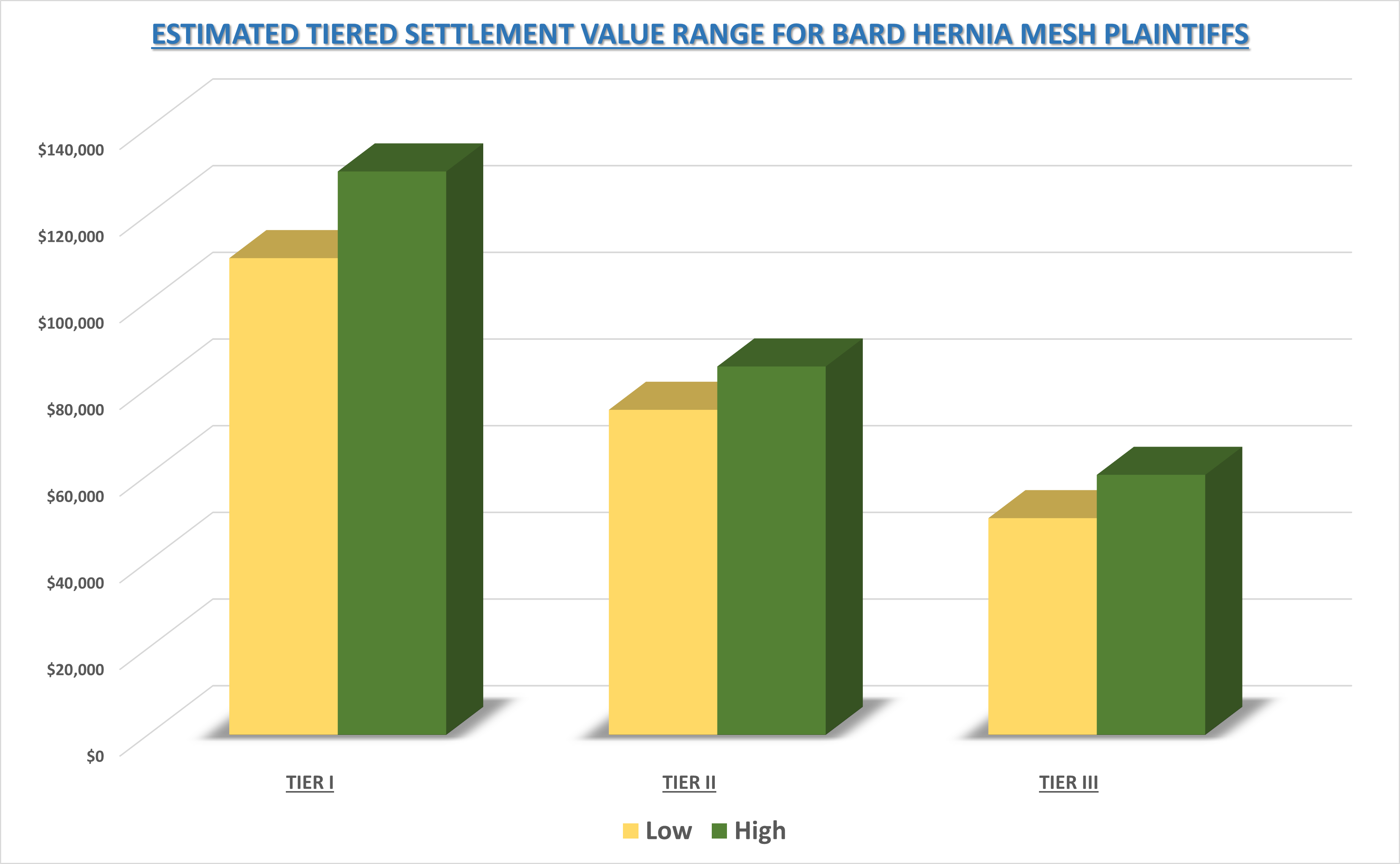 We believe that the average settlement payout for Bard hernia mesh plaintiffs will be around $80,000. The loss on September 8, 2021 loss has little impact on this projection.

Hernia mesh lawsuit settlement amounts for individual plaintiffs will vary based on a point-based tier system which will award more compensation to those plaintiffs with greater injuries.

Having settled the last round of mesh cases for an average of $70,000 each, Bard is not unfamiliar with this settlement range.  Psychologically, this makes a similar number easier to swallow.  The Johns and Milanesi verdicts taken together in context probably slightly increase projected future settlement amounts.

How Long Does a Hernia Mesh Lawsuit Take?

If you ask a victim who got into this litigation early, they will tell you a hernia mesh lawsuit takes forever.

The good news?  These lawsuits are expected to resolve in 2022.  Is that a guarantee?  Of course not.  It is a guess.

What Are the Symptoms of Hernia Mesh Failure?

It is (probably) not too late to sue Bard for the problem you have had with your hernia mesh.  Call and get answers. Call our hernia mesh attorneys today at 800-553-5053 or get a free consultation online.