This post has the latest news in the 3M earplug lawsuits.

November 23, 2021 Update: Last month, 3M filed a motion seeking to compel one of the bellwether plaintiffs (Steven Wilkerson) to submit to genetic testing. At his deposition, Wilkerson testified that he had 2 cousins who were born deaf. 3M wanted to test Wilkerson to see if his hearing loss could be caused by genetics rather than defective earplugs. Magistrate Judge Gary Jones denied the most last week. Judge Jones said that hearing loss in Wilkerson’s parents or siblings might justify testing, but deafness in “distant relatives” did not. Wilkerson was substituted in as a bellwether plaintiff following the dismissal of Chad McNeal. Wilkerson’s case is scheduled for trial in March 2022.

November 15, 2021 Update: $13 million verdict in Camarillorazo this afternoon.  But we got a defense verdict in Palanaki. Click on the next link below for more details.

The 5th bellwether trial in the 3M earplugs litigation resulted in a defense verdict. After 5 trials 3M has won 2 and the plaintiffs have scored victories in the other 3. Although the round 5 loss was disappointing, it was hardly surprising because the case was a defense pick that the plaintiff sought to dismiss prior to trial.

Two more 3M trials started on November 1, 2021, before different and new (new to the 3M litigation) federal judges.  There will be more trials immediately after those two trials.  So in terms of understanding the settlement amounts in the 3M lawsuits, we are getting closer to the finish line.

I expect what we will find is high average payouts from juries in these lawsuits.  But plaintiffs’ lawyers will not win every one of these cases.  There will be losses in a minority of 3M earplug lawsuits.

There are well over 200,000 pending cases against 3M Company involving alleged defects in the company’s Combat Arms earplugs. A small handful of around twenty of these lawsuits has been selected for bellwether test trials. Each side (plaintiffs & defendants) take turns selecting individual cases for bellwether cases.

Some of the bellwether cases are selected by the MDL judge (Hon. M. Casey Rogers). The cases picked by the judge are middle-of-the-road claims that are not overly favorable to either side. There have been 5 bellwether trial rounds so far. The plaintiffs have won 3 rounds and 3M has one 2.

Looking at the results by round is somewhat misleading, however, because the opening trial included 3 plaintiffs (one defense pick, one plaintiff pick, and one judge pick). Looking at the bellwether “scorecard” by individual plaintiff gives a more accurate picture of where we stand. As shown in the chart below, 4 of 6 bellwether plaintiffs have won verdicts in their case against 3M. The only 2 losses have been in “defense pick” cases. 2 other defense pick cases have resulted in big verdicts.

Looking at the results by round is somewhat misleading, however, because the opening trial included 3 plaintiffs (one defense pick, one plaintiff pick, and one judge pick). Looking at the bellwether “scorecard” by individual plaintiff gives a more accurate picture of where we stand. As shown in the chart below, 4 of 6 bellwether plaintiffs have won verdicts in their case against 3M. The only 2 losses have been in “defense pick” cases. 2 other defense pick cases have resulted in big verdicts.

The case that ended up in the 5th 3M earplug bellwether trial was Michelle Marie Blum v. 3M Company, et al. (7:20-cv-00122). Like most other plaintiffs in the 3M earplugs litigation, Michelle Blum was a military veteran claiming hearing loss or damage. Blum allegedly used the 3M earplugs during her time serving in the Army. Blum was honorably discharged from the Army in 2009.

Blum claimed that she first suffered hearing damage BEFORE she was discharged from the Army in 2009, but she didn’t seek treatment for it until shortly before filing her lawsuit in 2019. The medical evidence of Blum’s hearing damage also appeared to be very weak compared to other cases. In fact, 3M presented testimony from 2 experts who questioned whether Michelle Blum actually had any hearing damage at all.

Back in July, counsel for Blum actually sought to dismiss her case without prejudice. That effort failed because 3M opposed the dismissal. The fact that her lawyers were seeking to dismiss her case 3 months before trial is a clear indication that they knew Michelle Blum would not present a very strong claim against 3M.

Over the course of a 2-week trial, the jury heard testimony from Ms. Blum along with a host of expert witnesses presented by both sides. After hearing all of the testimony the jury deliberated for 2 days (considerably longer than any of the prior 3M earplug juries deliberated).

Last Friday afternoon the jury came back with a defense verdict in favor of 3M.  The jury unanimously found that the plaintiff Michelle Blum had not proven facts necessary to support any of her 10 tort claim theories against 3M regarding the defective earplugs.

The defense verdict in the Blum case was certainly a disappointment for those on the plaintiff side of the 3M earplugs lawsuits. A plaintiff victory, in this case, may have finally prompted 3M to start thinking about a global settlement. However, the defense verdict in the Blum case did not come as a major surprise to most of us who have been following the litigation.

The reason the defense verdict is not a major shock is there were a number of indications going into the trial that Michelle Blum had a weak and problematic case against 3M. For starters, Michelle Blum was a “defense pick” so the lawyers for 3M selected her case out of thousands of others because they knew it would be favorable to their defense. The fact that plaintiffs’ counsel attempted to bail out of the case 3 months before trial is also a very strong indication of how they felt about it.

The Camarillorazo case is one of the bellwether selections made by the plaintiffs so it should be a much stronger case than Blum. This will be only the 3rd bellwether trial in a case selected by the plaintiffs. The previous 2 plaintiff picks both resulted in solid verdicts of $2.4 million and $1.1 million.

Like all of the other bellwether plaintiffs before him, Guillermo Camarillorazo is claiming that he suffered hearing damage while in the military because the Combat Arms earplugs failed to protect him.

One thing that sets Camarillorazo apart from other plaintiffs is that he is still an active-duty member of the Army. When Camarillorazo takes the stand to testify in this case he will be wearing his full military uniform.  That leaves an impression.

Joseph Palanki is another Army veteran with factual circumstances and allegations very similar to most of the other plaintiffs. He is alleging that he suffered hearing loss and tinnitus from using 3M’s defective Combat Arms earplugs during his time in the Army.  I would say his hearing injuries are more moderate.  The Palanaki case will be tried before U.S District Court Judge Liles Burke.

The trials in the Palanaki and Camarillorazo cases will feature similar witness testimony and evidence to that in the Blum case and they have both been given similar 2-week time frames. 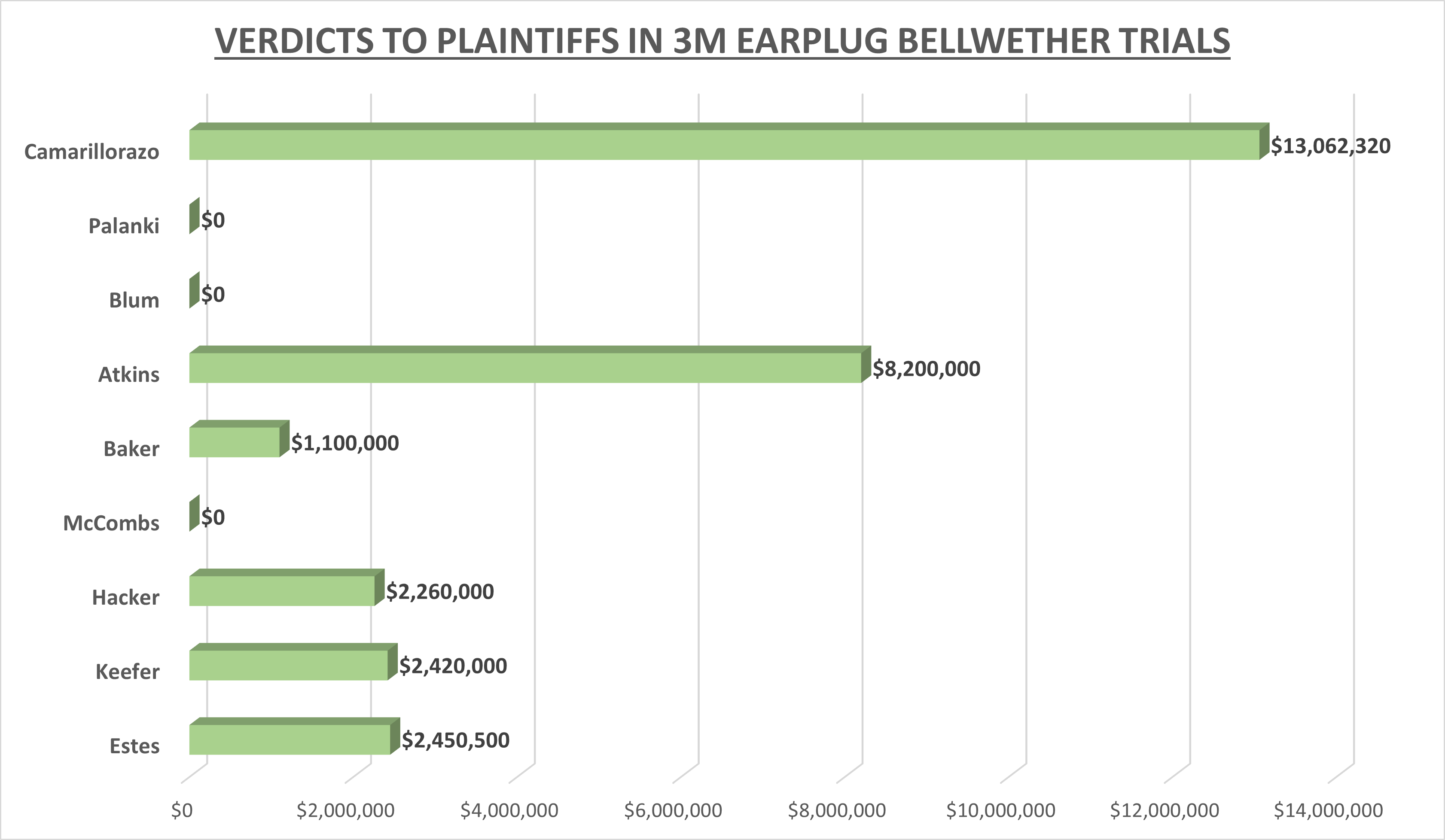 Both the Palanaki and Camarillorazo trials should be finished by mid-November. After that, the pace of bellwether trials becomes much more aggressive. The judge in the Earplugs MDL has ordered the parties to complete 5 more bellwether trials from November 2021 to February 2022.

Is 3M Afraid of the Earplug Lawsuits?

3M does not get it or pretends not to get it.  This is the biggest mass tort in American history. Here is what it has to say about the 275,000 lawsuits that have an average verdict in the millions:

… the amount recorded is not material to the Company’s consolidated results of operations or financial condition. In addition, the Company is not able to estimate a possible loss or range of possible loss in excess of the established accruals at this time.

Are you serious?  I think there will be a lawsuit from shareholders one day on 3M’s failure to fully disclose the litigation risks.  Pension funds are suing Bayer over the Roundup lawsuits and what they were told about the litigation risk and I expect the same against 3M eventually.