The bellwether test trials in the 3M earplugs litigation began about 15 months ago. These trials were held to evaluate the relative strength of the earplug lawsuits against 3M and give both sides an idea of what to expect if all of the cases went to trial.

Last Friday, the 16th and final bellwether trial ended with a bang for the plaintiffs. A federal jury in Pensacola, Florida awarded $77.5 million to Army veteran James Beal. This was the largest amount awarded to an individual bellwether plaintiff so far.

In this post, we will look in detail at the Beal case and break down the blockbuster verdict. We will also do a post-game analysis of the 3M bellwether trials from start to finish and what the results should mean for the 270,000 plaintiffs who still have pending cases.

The 16th and final bellwether test trial in the 3M earplugs MDL (Beal v. 3M & Co., et al., 7:20-cv-006) featured the case of Plaintiff James Beal. Just like all of the other bellwether plaintiffs, Beal was a veteran of the U.S. Army alleging that he suffered hearing loss and tinnitus because his 3M Combat Arms earplugs were defective and failed to protect his ears from loud noise.

The Beal trial began on May 9, 2022, at the federal courthouse in Pensacola, Florida. The trial was presided over by Hon. Robin Rosenberg, on special assignment from the Southern District of Florida. Judge Rosenberg is actually the judge overseeing the Zantac MDL. The trial followed the standard 2-week format that has been scripted over the course of the previous bellwether trials.

After 9 days of witness testimony and closing arguments, the case went to the jury last Friday morning. It took them very little time to reach their verdict. The jury found that Beal had proven all of his claims against 3M (including fraudulent misrepresentation and fraudulent concealment).

The jury awarded James Beal $5,000,000 in compensatory damages and also awarded $72,500,000 in punitive damages against 3M. The total damages award to Beal was $770,500,000. This was the largest amount of money awarded to a single bellwether plaintiff in any of the previous trials. The next highest was the $55 million awarded to both Ronald Sloan and William Wayman in the 10th bellwether trial (which featured 2 consolidated plaintiffs).

What does a big punitive damage award mean?  It means the jury did not think you were just negligent – the jurors thought what you did was awful.

The size of the Beal verdict dwarfs almost all of the previous bellwether verdicts. The $72.5 million punitive damage will be an especially hard pill for 3M to swallow. News of the verdict prompted 3M’s stock to fall 3% in afternoon trading on Friday. This means the market through this verdict might cost 3M $3 billion more than originally anticipated.

The 3M defective earplugs litigation is the largest consolidated mass tort in the history of the United States. As of May 16, 2022, there were 291,224 plaintiffs with pending cases in the 3M earplug MDL. Taking all of these cases to trial would simply not be possible, so a handful of representative cases were selected for bellwether “test” trials.

There were 16 bellwether trials in the 3M earplug MDL, featuring the claims of 19 individual plaintiffs. The final win-loss record for plaintiffs in these 16 trials was 10-6, with most of the 6 losses coming in cases that were picked by 3M’s defense team.

The total damages awarded in the 10 successful bellwether trials were $299,692,820. That works out to an average of just under $30 for each winning plaintiff. This included $186,045,925 in punitive damages, which was 62% of the total. The biggest verdict from a trial was $110 million awarded to a pair of consolidated plaintiffs (Sloan/Wayman) in the 10th bellwether trial. The largest award to a single plaintiff was the $77.5 million awarded to Beal. 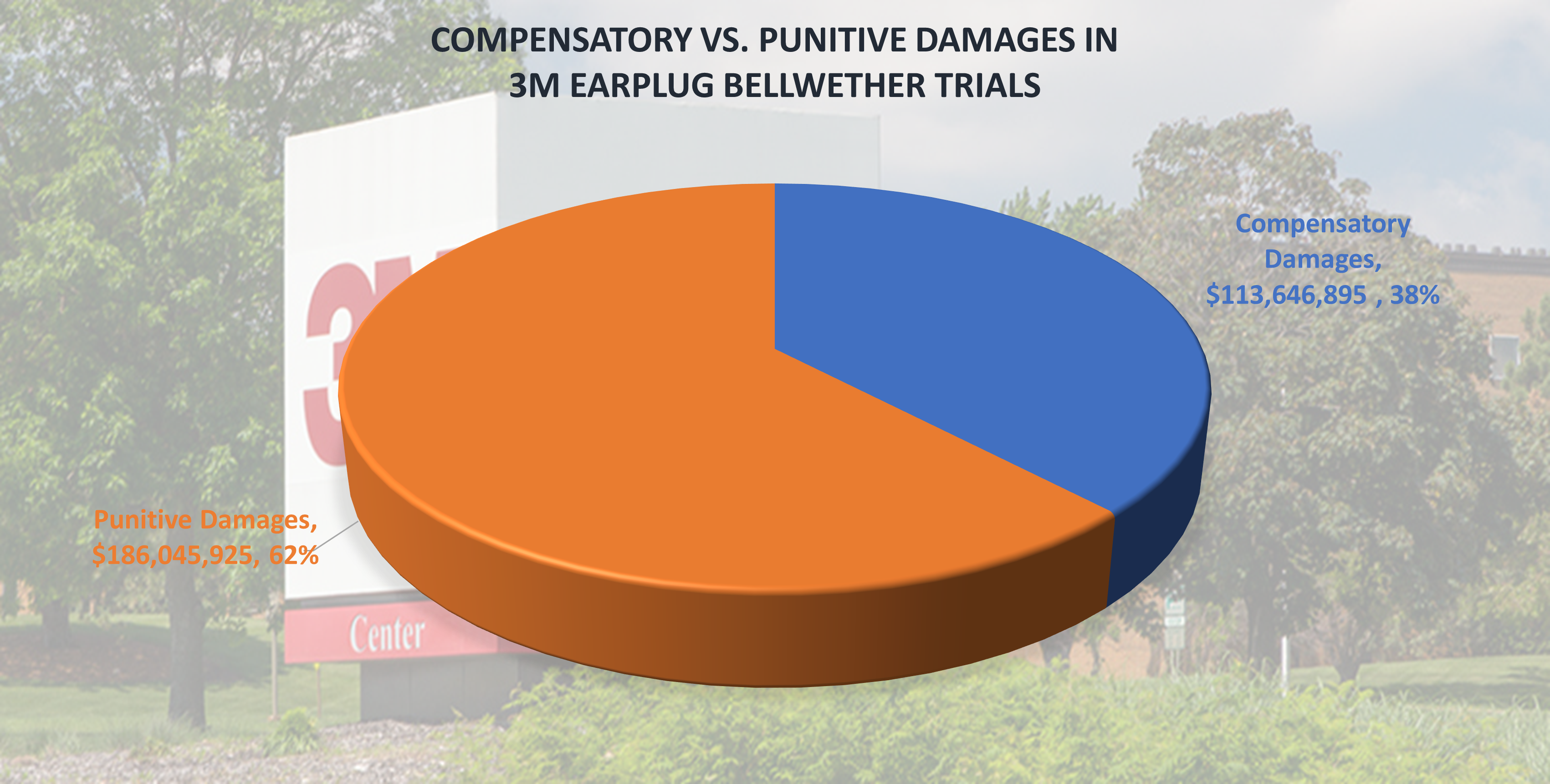 Does this Mean the 3M Earplug Cases Will Finally Settle?

The big verdict in the Beal case will certainly help push 3M towards a global settlement of the earplug cases, but it is not going to force anything to happen right away. One of the major obstacles preventing 3M from negotiating a global settlement at this point is that there are too many pending cases.

3M is convinced (admittedly with some justification) that a large percentage of the 291,000 plaintiffs with pending cases do not have valid, legitimate hearing loss claims.  Just recently, in fact, the MDL judge agreed to dismiss a large block of about 20,000 cases where the plaintiffs have no military service records to support their claims. We believe that 3M is seeking to weed out invalid claims and reduce the size of the plaintiff pool before it comes to the negotiating table to discuss a global settlement.