The very first bellwether trial in the 3M earplugs litigation featured the claims of 3 plaintiffs (Luke Estes, Stephen Hacker, and Lewis Keefer) and ended in a jury verdict awarding the 3 veterans a total of $7.1 million in damages for their alleged hearing loss. Ten more bellwether trials followed, with the most recent ending in a $110 million verdict for 2 plaintiffs.

Immediately following the first bellwether trial, 3M’s defense team vowed that they would fight the verdict on appeal. Last week, 3M’s attorneys filed their appellate brief laying out their argument for why the U.S Court of Appeals for the 11th Circuit should overturn the verdict and accept a legal defense that would effectively halt the earplug litigation entirely.

3M’s Legal Arguments in a Nutshell

3M’s appeal in the Estes/Hacker/Keefer case makes 2 basic arguments for why the verdict should be overturned: (1) the product liability claims against 3M should be barred by the government-contractor defense, and (2) that the MDL judge mishandled the trial and allowed the jury to hear prejudicial evidence that should have been excluded.

The outcome of 3M’s government contractor defense in this appeal has far-reaching implications for the future of the 3M earplug litigation. If the 11th Circuit appeals court agrees with 3M and holds that the product liability claims involving the Combat Arms earplugs are precluded under the government contractor defense, the entire 3M earplug mass tort could come to a sudden halt.

What Is the Government Contractor Defense?

The government contractor defense is an affirmative defense that shields federal contractors from state tort liability for defects in products supplied to the federal government.  This legal doctrine was first articulated by the U.S. Supreme Court in the case of Boyle v. United Technologies Corp., 487 U.S. 500 (1988).

In the Boyle case, the father of a marine pilot who died in a helicopter crash sued the manufacturer of the helicopter, alleging that the escape hatch was defectively designed. The case went to trial and the jury returned a verdict in favor of the plaintiff. On appeal, the Supreme Court applied the government contractor defense and found that the helicopter manufacturer was immune from suit because the Navy had selected and approved the design of the escape hatch. 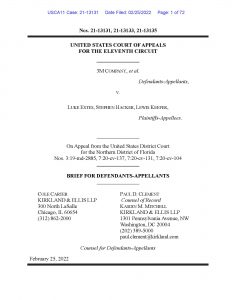 In Boyle, the Supreme Court set forth a 3-part test for determining when the government contractor is applicable. Under this test, liability for design defects in military equipment cannot be imposed on the supplier when the following 3 elements are present:

When all three of these elements are established, a military supplier such as 3M cannot be held liable for personal injury claims related to the equipment. In Boyle, the Court explained that the government contractor defense seeks to protect the “uniquely federal interest” in the procurement of military equipment.

3M’s defense team has been pushing the government contractor defense from the beginning of the Combat Arms earplugs litigation. 3M argues that they should be immune from tort liability based because the Combat Arms earplugs were designed according to the military’s specifications and, therefore, the government contractor defense squarely applies. In early 2020, 3M made this argument in a motion for summary judgment filed in the MDL.

In July 2020, the judge in the 3M Earplugs MDL (Hon. M. Casey Rogers) found that 3M “failed to establish the elements of the government contractor defense” and denied the summary judgment motion. In her memorandum opinion, judge Rogers explained that the government contractor defense is not available unless the dispute in the litigation “implicates interests that are ‘uniquely federal’ within the meaning of Boyle.” Under Boyle, the procurement of equipment by the U.S. military is an area of “uniquely federal interest.”

Attorneys for 3M argued that supplying earplugs to the military involved the procurement of equipment and, therefore, the “uniquely federal interest” analysis is clearly satisfied. After careful review of the applicable law, however, judge Rogers found that the analysis was not that simple because 3M never actually had a procurement contract with the Army for the design and supply of the earplugs.

Judge Rogers explains in detail how her decision on this point of law is supported by existing case law:

Judge Rogers then goes on to explain that the cases cited by 3M are distinguishable because the suppliers in those cases designed products for the army pursuant to a contractual relationship. 3M never had any contractual relationship with the Army regarding the design of the Combat Arms earplugs. Finally, Judge Rogers states that even if the uniquely federal interest analysis were satisfied, 3M’s government contractor defense would still fail because they cannot satisfy the 3-part test set forth in Boyle. Specifically, judge Rogers found that 3M had no evidence that the Army “approved reasonably precise specifications” for the earplugs.

In its appellate brief, 3M takes aim at Judge Rogers’ decision that the government contractor defense is not applicable when there is no procurement contract.

What is conspicuously absent from 3M’s brief on this issue, however, is an effort to address the extensive supporting case law cited by judge Rogers in support of her ruling. The brief simply makes a blanket declaration that the case law does not specifically say “a procurement contract is required” and claims that her ruling is at odds with the decision in Brinson v. Raytheon 571 F.3d 1348 (11th Cir. 2008).

But Judge Rogers addressed the Brinson case in her opinion and explained that it did not actually support 3M’s position because it did involve a government contract for the design of an aircraft.