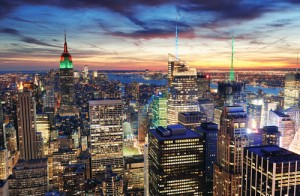 New York has favorable juries, particularly in its urban areas. But the reality is that this number is distorted by the lack of smaller and midsized car accident lawsuits. Under New York’s no-fault law, an insurance company is required to pay drivers, passengers, and pedestrians up to $50,000.00 for their legitimate economic and medical losses but does not provide for pain and suffering. Only permanent injuries cases can recover more than $50,000. This leads to fewer lawsuits in smaller cases – of which there are many – which increases the overall award in New York.

Below is a summary of recent reported settlements and verdicts in New York auto accident cases.  These cases should be used for informational purposes only and not as a guarantee of what your own case might be worth.

Accident: Plaintiff was driving through an intersection in the city when Defendant ran a red light at the cross street and violently t-boned Plaintiff’s vehicle into parked cars on the opposite side of the street. Plaintiff had 1 witness to support his version of the accident.

Accident: Plaintiff, a construction laborer, was stopped at a red light when he was rear-ended very hard by Defendant who was driving a large delivery truck.  Fault was fully conceded and damages were the only issue.

Injuries:  Plaintiff did not go to the hospital or request any other medical treatment immediately after the accident and first sought treatment 2 days later.  Plaintiff alleged that he suffered partial tears of 2 ligaments in his left knee for which he underwent arthroscopic surgery and meniscectomy surgery. Plaintiff’s expert testified that he will eventually require knee replacement surgery. Plaintiff also claimed that he suffered a herniated disc with nerve impingement.  His injuries left Plaintiff on crutches for 2 months and required 12 weeks of physical therapy.  Plaintiff was also out of work for 6 months. The defense countered that the accident did not involve enough force to cause the alleged injuries and suggested that Plaintiff’s conditions were pre-existing issues.

Accident: Plaintiff was making a left turn in her sedan at a busy intersection in the Bronx with double left turn lanes.  Defendant was driving a delivery truck and also turning left in the adjacent lane.  Plaintiff alleged that Defendant strayed into her line and side-swiped her car.  Defendant contested liability and argued that Plaintiff was using her cell phone and not paying attention.

Injuries:  Following the accident Plaintiff was taken to a hospital and received minor treatment for pain in her back and left shoulder.  Plaintiff eventually claimed that she suffered a tear of her rotator cuff and glenoid labrum in the left shoulder.  Plaintiff also alleged disc herniations in her L3-4 and L5-S1 discs and a bulge in her L4-5 disc.  Treatment for the herniated discs involved 3 months of physical therapy.  The shoulder injuries allegedly required 2 arthroscopic surgeries and follow up therapy.

Accident: Plaintiff was hit in the side rear while making a left turn on a green arrow.  Defendant allegedly ran a red light. Defendant disputed this version of events but gave contradictory statements.

Injuries: Plaintiff alleged multiple disc herniations with nerve impingement and radiculopathy which required extensive therapy and eventually back surgery. Plaintiff alleged that he continued to experience pain which limited his physical activities.

Accident:  Plaintiff was stuck on the side at an intersection while Defendant was making a left turn and failed to yield right of way.  Defendant was arrested and charged with DUI.

Injuries: Plaintiff alleged L4-5 and L5-S1 disc herniations.  He underwent 2 years of physical therapy and epidural steroid injections. Plaintiff eventually had to have spinal fusion surgery followed by another 12 months of therapy.

Accident:  Plaintiff was stopped at a red light when he was rear-ended by Defendant who was operating a taxi.  Fault was admitted.

Injuries:  Plaintiff alleged C3-4 and L4-5 disc herniations and a labrum tear in his hip. Plaintiff had 2 separate arthroscopic surgeries on either side of his hip.  The second surgery had to be repeated due to complications.  The back injuries were treated with physical therapy but Plaintiff contended that he will eventually require spinal fusion surgery.  The defense disputed the injuries and claimed that they were degenerative.

Accident: Plaintiff was driving through an intersection in a parking lot when he was hit by Defendant who executed a poor turn without yielding implied right of way.

Accident:  Plaintiff, a stay at home mom in her late 20s, was hit on the side when Defendant ran a red light at an intersection.  Responsibility for the crash was admitted.

Injuries:  The accident fracture a bone in Plaintiff’s knee which had to be surgically repaired with rods and screws.  Plaintiff was in the hospital for 10 days and underwent months of physical therapy.  Plaintiff suffered continued pain and limp in her walk.

Accident:  Plaintiff, a 24-year-old electrician, was a passenger in truck that was rear-ended by Defendant shortly after coming to a stop at a stop sign.  Responsibility for the collision was admitted.

Injuries: Plaintiff did not seek treatment initially.  He eventually alleged C3-4 disc herniation and dis bulges of his C4-5 and C5-6 discs with spasms. Plaintiff’s treatment was limited to just 3 months of physical therapy.  Plaintiff was advised not to return to work and claimed to have continued pain in his neck. The defense contested the injuries.

Accident:  Defendant pulled out of his street parking spot without seeing Plaintiff who ran into Defendant’s hospital transport van.  Defendant contested fault and asserted that Plaintiff was speeding.

Injuries: Plaintiff claimed cervical and lumbar disc herniations.  After 10 weeks of physical therapy Plaintiff underwent spinal fusion surgery.  Plaintiff claimed to have continuing pain in his neck that limited his ability to work and would require him to retire early.  The defense contested the injuries as pre-existing and suggested that the car accident did not involve enough force to cause them.

Here are some older verdicts we posted before we updated the page.