Our lawyers are handling Similac and Enfamil infant formula lawsuits for families whose premature babies suffered or died from necrotizing enterocolitis (NEC) after taking one of these formulas.

Medical research links cow milk-based infant formulas such as Similac and Enfamil to a dangerous neonatal medical condition known as necrotizing enterocolitis.  The makers of these formulas knew of the risk of NEC and did nothing to warn families and give them a choice.

If your premature baby was diagnosed with NEC after being given Similac or Enfamil formula, you may be able to bring a product liability lawsuit against the formula company and receive financial compensation for your loss.

Our law firm is currently seeking new NEC baby formula cases to represent families who have suffered as a result of this infant formula.  Our NEC formula lawyers are bringing lawsuits against the baby formula manufacturers.

Baby Formulas Are Linked to NEC in Premature Babies 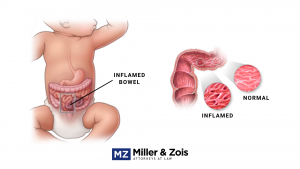 Babies born prematurely require extra nutrition to boost their development and growth. Many premature infants, however, are not physically able to breastfeed feed so they are generally given baby formula instead. Similac and Enfamil are the two leading brands of infant formula.

What is NEC in Newborns?

NEC is a very serious bacterial infection that can develop in the gastrointestinal system of newborn infants. It primarily occurs in premature or underweight infants. NEC can be extremely dangerous for newborns. When NEC occurs it causes inflammation of the intestinal tissue and rapid tissue decay. A perforation (hole) may form in the baby’s intestines causing bacteria to leak out into the abdomen.

NEC can be mild in some infants and extremely serious in others. The first step in the treatment of NEC is to stop all oral feedings and begin the baby on an aggressive course of antibiotics.

Nutrients will then be administered intravenously. If the infection is not stopped quickly enough it may leave dead tissue in the baby’s intestines. If this occurs surgery will be necessary to remove the dead intestinal tissue and repair any perforations.

Even a mild case of NEC can be very dangerous and potentially life-threatening for a premature baby. The main reason for this is that NEC can lead to a fatal blood infection called sepsis.

When NEC destroys the baby’s intestinal tissue it allows bacteria to leak out of the intestine into the abdominal cavity.

This type of infection is called peritonitis and if not immediately and effectively treated it will eventually allow the infection to enter the baby’s bloodstream and become sepsis.

Even when NEC is not fatal, it can result in other long-term or permanent complications and adverse health consequences. 1 of every 3 babies with NEC will develop intestinal strictures.

This is a narrowing of the intestine. Intestinal strictures can make it difficult for food to pass through and may require surgery to correct. If NEC results in surgical removal of intestinal tissue, it can cause short bowel syndrome and impact the baby’s development and growth.

NEC in Premature Infants Caused by Enfamil or Similac

NEC only occurs in 1 out of every 2,000 full-term live births in the U.S. In premature births, however, the condition is much more common. NEC occurs in about 10% of all premature babies (born 37 weeks or earlier).

The exact cause of NEC is not fully understood, but there are numerous scientific and clinical studies definitively proving that cow-milk-based infant formulas, such as Similac and Enfamil, significantly increase the risk of a premature infant developing NEC.

The first study suggesting a possible link between bovine baby formulas and NEC was first published in the Lancet back in 1990 and found that formula-fed babies were 10 times more likely to develop NEC.

Ten years later, a study in the Journal of Pediatrics reached similar conclusions and found that infants fed with breast milk or human milk fortifiers were 90% less likely to develop NEC compared to those fed with traditional formula. 2 additional studies were published in 2013 which reached even more conclusive results about the link between NEC and bovine formulas.

A new study published yesterday on October 14, 2021, in the British Medical Journal suggests that the makers of infant formulas such as Similac and Enfamil have funded biased and unreliable clinical product trials. The researchers found that the infant formula trials showed a “universal lack of transparency” and may have downplayed the risks of NEC associated with their cow-milk formula products.

Another round of clinical study results was published in 2016 (Beyond Necrotizing Enterocolitis Prevention – Breastfeeding Medicine ) and 2017 (Human milk is the feeding strategy to prevent necrotizing enterocolitis – Semin Perinatol.).

Finally, in 2019, Cochrane (an independent health care research group) released the results of the most comprehensive study to date comparing health results for premature babies fed with bovine formula versus human milk.

The results of the Cochrane study put to rest any lingering debate about the existence of a causal relationship between cow-milk-based formulas and NEC in premature infants.

Similac is manufactured and sold by Abbott Laboratories Inc., a large medical device and health care product company based in Illinois. You have likely heard of them.  You are less likely to have heard of  Mead Johnson Nutrition Company, the company that makes Enfamil.  But it is a 16 billion-dollar company.

Both Abbott and Mead were well aware of the scientific evidence establishing that their cow-milk-based formulas caused a significantly increased risk of NEC in premature infants. Despite being well aware of the link between their formulas and the risk of NEC, Abbott and Mead deliberately chose not to include a warning label about the NEC risk on their product labeling.

Why?  Well, let’s start by saying we do not know yet. These baby formula lawsuits are just beginning.  But, usually, follow the money.  A warning will lead to fewer sales.  Fewer sales lead to fewer profits and few yachts.  We all know the story, right?

In the face of growing scientific proof that their formulas presented an increased risk for premature infants to develop NEC, Mead and Abbott continue to market their products as safe and failed to warn consumers about this risk.

A growing number of parents and infants who were fed with Similac and Enfamil formula and subsequently developed NEC are filing product liability lawsuits against the formula manufacturers (Abbott and Mead) for negligent failure to warn.

The lawsuits allege that Abbott and Mead had a duty to warn about the risks of NEC and their baby formula products but deliberately failed to include any such warning while continuing to market their products as safe.

These NEC baby formula product liability lawsuits are new. But families have been filing medical malpractice lawsuits in necrotizing enterocolitis lawsuits for years. So the settlement compensation in these lawsuits, if successful, has a history that can guide us in determining possible settlement amounts in these lawsuits.

The average verdict in a successful NEC preemie lawsuit is in the millions of dollars. Our baby formula lawyers anticipate similar compensation payouts if plaintiffs win these trials.

But our guess is that you will not see Similac lawsuits or Enfamil lawsuits going to trial. I think the makers of these formulas will seek an out-of-court global settlement of as many NEC lawsuits as they can.

Settlement amounts and trial amounts are not the same thing, however.  So even if the makers of Similac and Enfamil predicted an average jury verdict compensation payout of $2 million per individual case, it would not mean the average settlement amount would be $2 million.  Why?  A settlement is a compromise.

No, the NEC baby formula lawsuits will not become a huge class action lawsuit. Thankfully, there number of victims is relatively small. NEC is rare.

But the infant formula claims may become a class action, albeit one that does not have thousands of plaintiffs. And while the size of the lawsuits could be smaller, the settlement amounts could be huge. Because the injuries are so extreme in many NEC cases, the average individual settlement compensation payout in the baby formula lawsuits could be extraordinary.

Just to give you some context, let’s look at an example NEC lawsuit.

The complaint in this NEC lawsuit alleges that the plaintiff’s baby was born prematurely in 2013. Initially, the baby was “doing well” on her mother’s breast milk and was progressing normally. Two weeks after birth, the baby was fed Enfamil cow-milk-based formula for several days. The lawsuit claims that the formula caused the baby to develop NEC which required “aggressive medical intervention.”

Sadly, the baby died a week later from complications related to the NED. The complaint alleges the failure to warn that we have been talking about.  The lawsuit alleges Mead Johnson knew about the dangers of its bovine-based formula and failed to provide adequate warnings about the risk of NEC associated with the formula.

Our law firm is currently investigating potential NEC baby formula lawsuits. We are particularly interested in hearing from parents of preemies who were given Similac or Enfamil formula and subsequently developed NEC. If you believe your child developed NEC as a result of a cow-milk-based formula, call our office today for a free consultation at 800-553-8082.