Just for Men pitchmen like Keith Hernandez may promise we will “Go from Grey to Great” but some are finding an unpleasant catch to the inexpensive hair and beard dye. Specifically, customers are complaining of painful reactions after using the product to clean up their patches of grey.

Just for Men’s manufacturer, Combe Incorporated hasn’t issued a recall of any of their hair dye products and most negative reactions to the products are usually temporary. But for many middle-aged men hoping to hold onto that youthful look a little longer, Just for Men’s potential for skin irritation and other issues may do more harm than help. 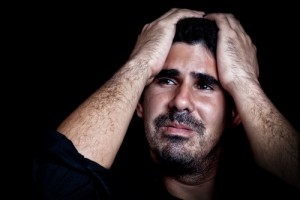 Does getting rid of the gray come with a price?

The issue with Just for Men’s chemical hair dyes seemingly lies in one of its active ingredients, p-Phenylenediamine (PPD).

PPD is a common organic compound found in hair dye that can cause allergic reactions in less than 5% of the general population.  PPD is one of only five substances listed as a “strong sensitizer” by the Consumer Product Safety Commission.

In most cases, men allergic to PPD develop minor face rashes, swelling, or burning sensations. While not considered a major health risk, PPD is considered one of the most prevalent chemical allergens in the world. On-the-box directions even instruct users to do a 48-hour skin allergy test before using Just for Men to prevent adverse reactions.

However, there’s a pretty major wrinkle. It seems that men who have used Just for Men products without issue for years are now beginning to experience even more troubling reactions. A quick scan of over 400 customer reviews shows a disturbing pattern among longtime Just for Men users.

This includes more severe rash, swelling, itching or burning as well as facial blisters/weeping sores, skin discoloration, chemical burns, and throat swelling that can affect breathing or swallowing. In some instances, individuals who use Just for Men have needed emergency room treatment and even developed permanent facial disfigurement.

Even with increasing widespread complaints after use, Combe Incorporated strongly denies altering the existing Just for Men formula.  Some have speculated that these reactions may be the result of an unknown change in body chemistry among consumers. Men who experience adverse reactions to Just for Men products are often advised to switch to Henna-based dye products that do not contain PPD.

One lawsuit alleges that the Just For Men® Jet Black color shade intended for African American consumers contains 17 times more p-Phenylenediarnine (“PPD”).  If PPD is a dose-response problem, this is a real problem.  The claim alleges that the sensitization rate to PPD is five times greater for African American males than white males. Assuming this is true, how is there not a duty to warn?

Hiding Behind the FDA

Under the Federal Food, Drug and Cosmetic Act (FFDCA), 21 U.S.C. 361; FFDCA 601, Just For Men hair and facial hair dye products are recognized as coal-tar hair dyes. This classification exempts Just for Men’s dye from FDA approval prior to consumer use.

In fact, the FDA is prohibited from taking legal action against Defendants for safety issues related to the products so long as the packaging includes a generic cautionary statement noting that the products “contain ingredients which may cause skin irritation” and a skin test recommendation.

In the wake of these troubling new side effects, some men are suing Combe Incorporated. Allegations in the complaints vary from accusations that Combe altered the formula without warning the public of potential new risks to more general claims of design and manufacturing negligence.

In a 2016 class action complaint filed in Missouri district court, a man alleged that Combe deliberately misled the public about the safety of their Just for Men products. This suit even argues that PPD has a known link to life-changing medical conditions such as kidney failure, severe dermatitis, and convulsions.

Future of These Just for Men Dye Lawsuits

The problem for plaintiffs is that men who have suffered these injuries have not come forward.  Instead, the Plaintiffs’ Just for Men lawsuits have alleged defendants’ negligence gives rise to a claim for “medical monitoring.”

What is a medical monitoring lawsuit?

In a medical monitoring lawsuit, the defendants are required to create a monetary fund to compensate plaintiffs for costs for medical costs in the future for testing and treatment.

In this case, monitoring funds are sought primarily for allergy testing to determine whether plaintiffs have developed a PPD allergy.

People find these lawsuits annoying, frankly.  Judges have never been keen on them.  We will not file medical monitoring cases.  But more lawsuits will be filed with real injuries.

What Is the Status of the Just for Men Burn Injury Lawsuits in 2022?

There are Just for Men lawsuits pending around the country. But it is fair to say that these burn injury cases have not taken off. Few lawyers are handling them.

So the status of these lawsuits is you can still file one but many attorneys have lost interest. Not because they are not viable cases. The reason these lawsuits did not take off is that the number of victims was not what was once expected.

If you are looking for a lawyer and what to take a shot, I would call this New York firm.  They filed a Just for Men Class action lawsuit in 2019.  Our lawyers think – we are not sure – that this lawsuit is ongoing.