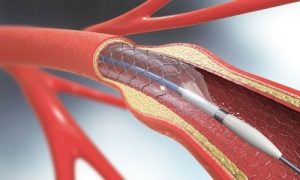 About the Vici Venous Stent

Venous stents are small tubs of metal mesh that are surgically implanted inside a vein to help expand the walls of the vein and keep them open to allow blood circulation. The stent effectively functions like a reinforcing scaffold or frame that prevents the vein from closing. Stents are typically placed in larger veins. Venous stents are commonly used for the treatment of chronic blood clots (deep vein thrombosis) and similar conditions that cause the veins to narrow or compress.

The Vici Venous stent was a new type of stent developed by Boston Scientific and was just recently released in 2019. The Vici stent was designed specifically for the treatment of iliofemoral venous obstructive disease, a condition involving blockages in veins located in the pelvic region. The location of these veins in the pelvis makes them subject to significant compression, making it difficult for a stent. The Vici Venous was designed to address this problem with a unique closed-cell geometry that gave the stent enough strength to withstand these pressures while maintaining flexibility.

Following its initial FDA approval in May 2019, the Vici Venous stent became widely used in procedures involving veins in the pelvic region. Boston Scientific sold and distributed around 31,000 Vici Venous stent devices to providers in the U.S.

Last week, on Monday, May 21, 2021, the FDA announced a Class I medical device recall of all Vici Venous and Vici RDS Venous stent devices in the U.S. According to the FDA’s public notice, the Vici stents were recalled after a growing number of reports came in which indicated that the Vici Venous stents had a tendency to migrate or move inside the body after being implanted.

When a stent migrates or moves from the place where it is originally implanted in the body it can be extremely dangerous. Once it moves the stent can cause future circulation blockages and potentially death if it gets near the arteries near the heart. The migrated stent must be located and removed immediately to avoid further injury. This typically requires additional surgery or the use of a catheter.

Removing a migrated stent can cause of a host of risks and potential complications for the patient. Some of the most significant risks in surgical removal of a migrated stent include damage to the blood vessel or damage to the walls of the heart. In several reported cases involving the Vici stent, the stent embolized the heart and required emergency surgery.

The recall notice from Boston Scientific advised all doctors and hospitals to immediately stop using the Vici Venous stent devices and clear them from their inventory. For patients who already had the Vici Venous stent implanted, healthcare providers were advised to closely monitor these patients for signs of stent migration but did not advise further action in the absence of complications.

If you have a Vici Venous stent surgically implanted and it later migrated inside your body, you may have a valid tort claim against Boston Scientific. Call our dangerous medical device lawyers today at 800-553-8082 for a free consultation.

Why Was the Vici Venous Stent Recalled?

The Vici Venous stent was recalled after Boston Scientific and the FDA received a number of reports indicating that the Vici stent had tendency to migrate once inside the body.

Can I Sue for Venous Stent Migration?

If you have a Vici Venous stent (made by Boston Scientific) and it migrated inside your body after surgery, you may be able to sue and get financial compensation for your injuries.