Over 60,000 women in the U.S. get diagnosed with uterine cancer every year, making cancer of the uterus the 2nd most common female cancer. Recently, uterine cancer has been linked to exposure to certain chemicals putting this disease at the center of several mass torts including hair relaxer lawsuits and Camp Lejeune toxic water lawsuits. On this page we provide a simple overview of uterine cancer from a medical standpoint and look at how it has become involved in litigation.

The uterus is the largest female reproductive organ. This pear-shaped organ is often referred to as the “womb” and it is where human life begins in the form of fetal development during pregnancy. The uterus is comprised of 3 separate parts: (1) fundus, (2) isthmus, and (3) cervix.

The uterus is essentially a sac composed of 3 separate layers. The endometrium is the innermost layer on the inside of the uterine wall. The middle layer, the myometrium, is the thickest part of the of wall and is mostly muscle. The outermost layer is called the serosa.

During the female reproductive years, the inner endometrium layer of the uterus becomes thicker every month from hormones triggered by ovulation. This process is designed to prepare the uterus for pregnancy. When pregnancy does not occur, the thickened layer of the endometrium is shed resulting in the monthly bleeding of the menstrual cycle.

Cancer of the Uterus

Uterine cancer refers to cancer that originates in the tissue of the uterus. Approximately 65,000 women get diagnosed with uterine cancer on an annual basis, making it the most common type of female reproductive cancer. Uterine cancer actually refers to 2 distinct types of cancer originating in the uterine tissue: (1) endometrial cancer, and (2) uterine sarcoma.

In 2022, an estimated 65,950 women will be diagnosed with uterine cancer. This accounts for about 4 out of every 100 cancer cases (women and men) in the U.S. and for women uterine cancer is the 4th most common cancer type. In the U.S. and Europe, the rate of uterine cancer has been increasing by about 1% each year since the early 2000s. 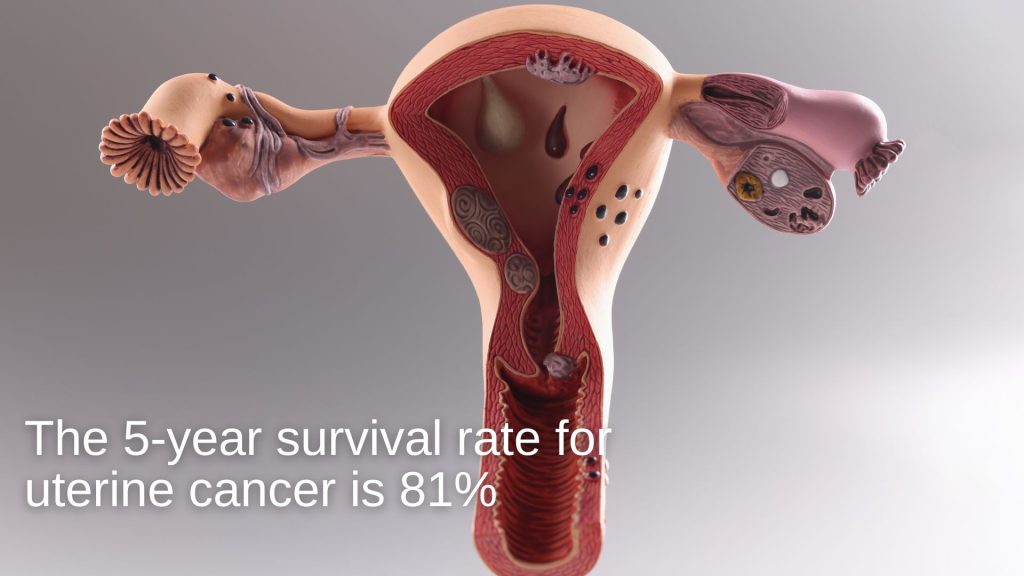 When diagnosed in its early stages (Stage I or Stage II) before its spreads outside the uterus, uterine cancer is highly treatable and has a survival rate of 95%. At Stage III (where the cancer has spread regionally only) the survival rate drops to 69%.

Surgical removal of the ovaries and fallopian tubes is also common for most uterine cancer cases. This is an added defense against the cancer spreading to these other reproductive organs, which become unnecessary following the removal of the uterus anyway.

Chemotherapy treatment is also aimed at eliminating remaining free cancer cells in the body. Chemo can be done instead of or in addition to radiation treatment. For uterine cancer subtypes that are hormone-positive, hormone therapy medication to control the production of estrogen is also utilized in the treatment plan.

Transvaginal ultrasound, a CT scan, or MRI are alternative diagnostic imaging tools that can be used to diagnose uterine cancer. Usually, however, the biopsy is the initial diagnostic method and these imaging tools are used to assess the extent of the disease after diagnosis.

Certain factors or circumstances are known to make some women more likely to develop uterine cancer compared to other. The accepted risk factors for uterine cancer include:

The latest scientific and medical evidence has shown that the use of chemical hair relaxer or hair straightener products for long periods of time can significantly increase the risk of developing uterine cancer. Hair relaxers or hair straighteners are products primarily used by Black women in the U.S. to force their hair to lay flat. Hair relaxer products use strong chemicals that disrupt the endocrine system which produces hormones like estrogen.

In October 2022, the National Institutes of Health (NIH) released the results of a decade-long study called the “Sister Study” which looked at the potential health impact of long-term exposure to chemicals in hair relaxers. The results of the Sister Study were published in a major medical journal and they caused shockwaves in the scientific and healthcare communities.

The Sister Study reported that women who used chemical hair relaxers or hair straighteners at least 4 times a year over several years were 4 times more likely to be diagnosed with uterine cancer compared to women who never used these products. Women who occasionally used relaxers were 2 times more likely to get uterine cancer. The groundbreaking results of the Sister Study have already prompted the start of what could be thousands of hair relaxer lawsuits.

From the 1950s to the late 1980s, the drinking water supply at the Camp Lejeune Marine Corps based in North Carolina was highly contaminated with toxic chemicals. Extensive scientific research and studies have determined that exposure to this toxic water caused increased rates of various types of cancer. A new federal law was passed in August allowing victims of the Camp Lejeune water contamination to bring civil lawsuits for their injuries.

Summarized below are recent tort cases (mostly medical malpractice) in which the plaintiff’s primary injury was uterine cancer.

If you believe that you have a uterine cancer tort case involving medical malpractice, hair relaxer, Camp Lejeune or some other type of mass tort, contact our attorneys today at 800-553-8082 for a free consultation.