Our lawyers are handling Prilosec and Nexium kidney damage lawsuits in all 50 states.

Last month, the defense filed several pre-trial motions in Reider which seek to exclude or limit testimony from certain plaintiff witnesses at trial.

The Nexium class action judge will hear these motions on September 19, not long before the trial which is when these types of motions are usually ruled on by the judge.  The result of the Reider trial will have a major impact on the future course of this PPI class action lawsuit and will impact future settlement amounts.  Two more bellwether PPI trials will be held next year.

Defendants in the Proton Pump Inhibitor (Nexium/Prilosec) MDL have argued that the plaintiffs’ failure to warn claims should be dismissed under the federal preemption doctrine because the FDA approved the warning labels for the drugs. This is a critical argument. If defendants were to win on this issue, the PPI lawsuits involving Nexium and Prilosec would effectively end.

But, thankfully, that will not happen. On Monday, Special Master Ellen Reisman issued a report and recommendation to the MDL Judge advising that this preemption argument should be rejected. Reisman noted that the argument should fail because the defendants cannot show that the FDA would have rejected a proposal to include stronger warnings about kidney injuries.

The first bellwether Nexicumtest trial in the MDL is set for November with five more to follow.

The first big Nexium-Prilosec PPI lawsuit in the MDL class action is heading for trial in November.  Plaintiffs’ lawyers defeated an effort by Merck and AstraZeneca to get out from under the lawsuit. The court rejected the defendants’ motion for summary judgment on the failure to warn claim – the key claim in James Rieder’s Nexium kidney injury lawsuit.  So it is all systems go for trial this fall.

There were 13,366 pending cases in the Prilosec/Nexium Proton Pump Inhibitor MDL as of July 15. This is actually less than 13,437 cases that were pending in the PPI MDL as of June 15. The reduction comes after a large group of cases were voluntarily dismissed by the plaintiffs and only a few new cases were transferred in. Meanwhile, we are just four months away from the first bellwether test trial set to begin in November.

Defense lawyers ave been filing motions to dismiss the Prilosec and Nexium lawsuit bellwether cases in the Nexium-Prilosec PPI MDL.  The gist of these motions is that preemption.  This is the idea that federal law preempts victims from being able to file lawsuits under state tort laws. . A new decision on May 23, 2022 from the District of New Jersey (In re Fosamax Alendronate Prod. Liab. Lit.,  could impact the federal preemption issue.  The Special Master, who assists the judge administer pre-trial discovery in the Nexium-Prilosec class action lawsuit, issued CMO No. 75.  This order allows the lawyers to offer their positions on how this decision might impact a Prilosec or Nexium lawsuit. (I don’t think this case – which rules for the defendant – has any impact on the issues in the Nexium class action lawsuit.)

If the initial round of bellwether trials in the Nexium-Prilosec PPI class action MDL does not generate a global settlement, the remaining 13,500 cases will be remanded for trial in large groups of several hundred.  This would put great pressure on lawyers on both sides because this is a lot of PPI lawsuits that need to be prepared for trial.  To effectuate plan, Judge Wolfson issued CMO #74. This order identifies a group of 200 “Wave One” cases in which the parties will start preparing for trial over the upcoming months. This will be followed by additional waves, each consisting of several hundred cases.

Drugs in the family known as proton-pump inhibitors (“PPIs”) are primarily used in the treatment of gastroesophageal reflux disease (“GERD” or “acid reflux disease”). PPIs are one of the most commonly prescribed medications in the U.S. with over 15 million prescribed users. PPI drugs work by reducing hydrochloric acid in the stomach.

Since PPIs like Prilosec and later Nexium was first introduced on the market back in the 1990s, several scientific studies have linked long-term PPI use to serious adverse health effects such as bone fractures and pneumonia. In 2015, however, new evidence emerged that conclusively showed that prolonged use of PPIs could significantly increase the risk of permanent kidney injuries.

Recent studies have shown the long-term use of PPIs is independently associated with a 50% higher risk of chronic kidney disease (“CKD”), even after adjusting for several potential confounding variables, including demographics, socioeconomic status, clinical measurements, and prevalent comorbidities, and concomitant use of medications. In one of those studies, the use of PPIs even for a very short period was shown to increase the risk of CKD by 10%.

CKD (chronic kidney failure) is a condition involving the gradual loss of kidney function. Kidneys filter waste and excess fluid from the blood, which is then excreted. When chronic kidney disease reaches an advanced stage, dangerous levels of fluid, electrolytes, and waste can build up in the body. CKD can progress to end-stage kidney failure, which is fatal without artificial filtering, dialysis, or a kidney transplant. CKD is associated with a substantially increased risk of death and cardiovascular events.

The PPI lawsuits allege that AstraZeneca and other manufacturers knew or should have known about the correlation between the use of PPIs and the significantly increased risk of chronic kidney disease and acute kidney injuries. Despite clear knowledge that PPIs like Nexium and Prilosec caused CKD and acute kidney injuries, the lawsuits accuse PPI manufacturers of continuing to market and sell their drugs without warning consumers or healthcare providers of the significant risks of kidney disease or injury.

By August 2017,  several thousand PPI kidney damage lawsuits were pending in federal courts around the country. The  Judicial Panel of Multidistrict Litigation (JPML) consolidated the cases into a new PPI MDL (Proton-Pump MDL 2789). The Proton-Pump class action MDL was assigned to judge Clair C. Cecchi in the District of New Jersey.

As of March 2022, 13,470 active PPI cases were pending in the MDL. Thousands more cases are expected to be added as new PPI kidney damage lawsuits are still being filed.

Who Qualifies for a PPI Kidney Damage Lawsuit?

Anyone who regularly took a proton pump inhibitor in prescription or over-the-counter form for at least 12 months and was subsequently diagnosed with kidney damage or chronic kidney disease may be eligible to file a PPI lawsuit. Common brand name PPI drugs include Nexium, Prilosec, Dexilant, Prevacid, and Protonix.

If you developed kidney damage or were diagnosed with chronic kidney disease or kidney failure after using one of these drugs for an extended period, you may be entitled to financial compensation. Although thousands of PPI kidney damage lawsuits have already been filed, it is not too late to file your lawsuit.

How much will Nexium kidney damage lawsuits be worth?

There have not been any reported settlements or verdicts in any PPI lawsuits alleging kidney damage, so we can’t say for certain what the likely settlement value of these cases will be. But there is no daylight between our projected Nexium settlement amounts and Prilosec and other PPIs.  But settlement rumors are swirling in October 2022.

So, again, based on results in prior kidney damage or failure cases coupled with our Nexium lawyers’ overall take on the litigation, we think that the PPI lawsuits in the highest settlement tier will have a settlement value of $100,000 to $150,000.  These will likely be mostly kidney failure lawsuits.  Cases in the second tier may end up being worth $60,000 to $90,000. The lowest tier cases may have a value of $20,000 to $50,000. 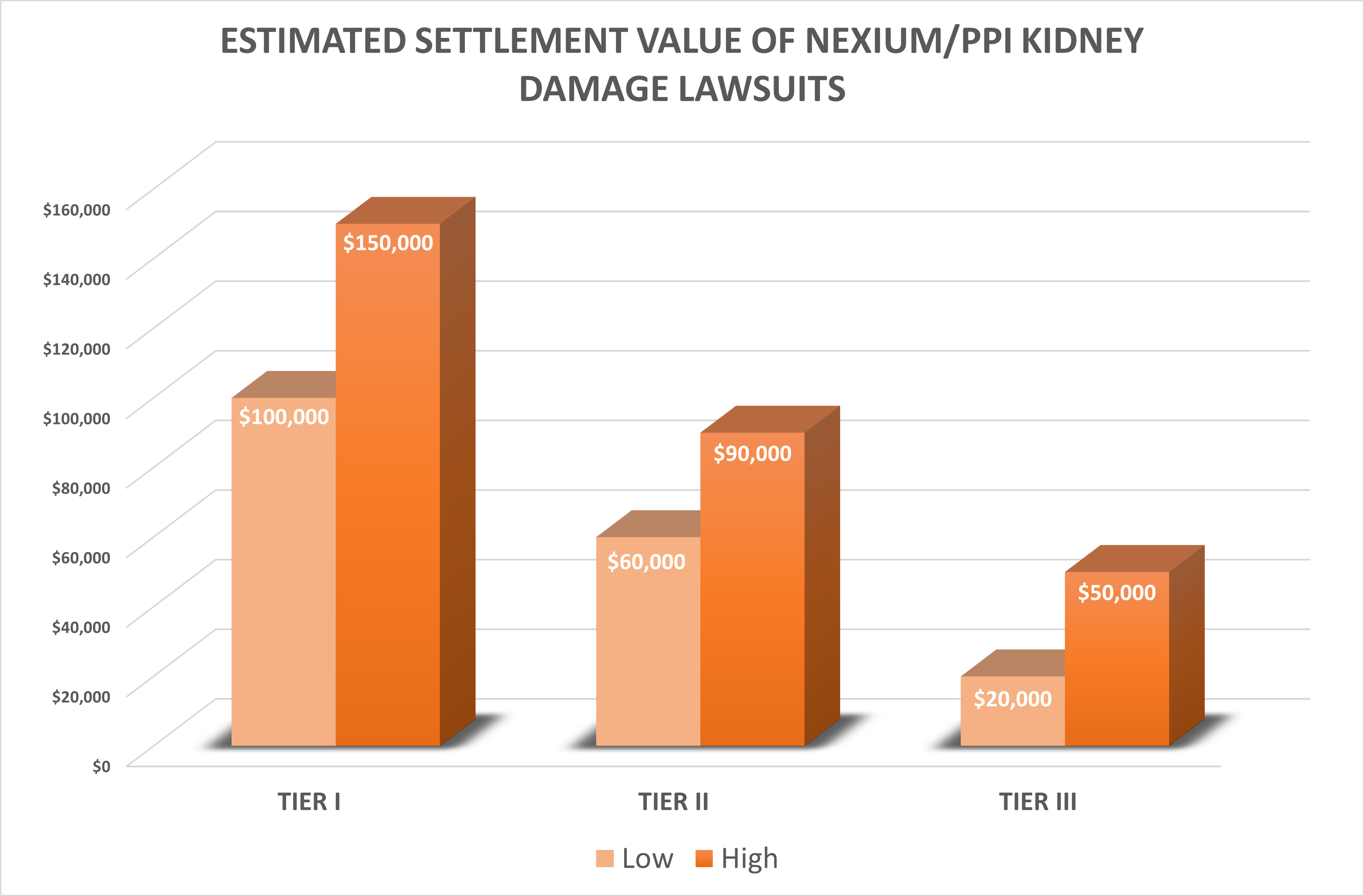 Another marker for predicting the average settlement amount in a Nexium lawsuit (or any PPI lawsuit) would be looking at other kidney injury lawsuits.  Let’s take a look at a few our lawyers could find to help understand potential settlement compensation payouts.

Our national product liability lawyers are actively seeking PPI kidney damage lawsuits from former users of Nexium, Prilosec, or other PPI drugs who were subsequently diagnosed with kidney damage. Call us today at 800-553-8082.