This page is about the AFFF/PFAS lawsuit. Our lawyers are handling firefighting foam lawsuits throughout the United States.

AFFF lawsuits are based on studies showing that Per- and polyfluoroalkyl substances are linked to severe adverse health effects, particularly various cancers. This is a public health concern, because of how prevalent PFAS are in both manufactured products and the environment.

On Monday, the judge in the AFFF firefighting foam class action MDL issued a Case Management Order declaring that the initial bellwether test case would be selected in December. The Order also stated that the actual bellwether trial would begin in April 2023.

Getting the first bellwether trial scheduled is a significant step forward in this litigation. Big verdicts in opening bellwether trials often lead to global settlement negotiations.

Back in November 2021, the defendants in the AFFF MDL filed a motion for partial summary judgment, arguing that they had immunity from suit under the government contractor defense.

Specifically, the motion claims that the federal government approved specifications for a specific type of AFFF (MilSpec AFFF). Therefore, defendants that manufactured this AFFF should be protected from tort liability. Both sides have extensively briefed the motion over the last nine months, and now oral arguments have been set for August 19th.

The government contractor defense has been asserted in previous mass torts (e.g., 3M earplugs) but has yet to be successful. If this motion is granted, it would dismiss a large portion of the defendants from the MDL.

Over the last month, 115 new AFFF firefighting foam / PFAS water contamination cases were transferred into the AFFF MDL, which now has 2,700 active cases.

A growing percentage of the newly filed cases are PFAS water contamination claims by plaintiffs who lived on or near military bases where firefighting foam was frequently used. The plaintiffs in these cases allege that the use of AFFF caused their water supply to be contaminated with PFAS resulting in adverse health consequences.

As of June 15, 2,586 cases were pending in the AFFF MDL in South Carolina. Since the last monthly count, 92 new plaintiffs have been transferred into the MDL. Over half of these new plaintiffs claim that they developed cancer from occupational exposure to firefighting foam. The rest of the new cases were brought by municipalities claiming that AFFF contaminated the local water supply.

The science connecting firefighting foam to cancer and other disorders continues.  A research study published last week revealed another health hazard associated with AFFF firefighting foam. The study determined that chronic exposure to PFAS (the toxic chemicals found in products like AFFF foam) can significantly weaken the bones of adolescent males.  Does anyone take this news by surprise?  Of course not.  These chemicals are awful in every possible way.

The study found that males between the ages of 12 and 19 with higher levels of PFAS in their blood had reduced bone mineral density, a condition that can lead to various other health issues. The study further confirms the health hazards of AFFF.

The PFAS MDL class action has grown to over 2,300 pending AFFF lawsuits consolidated in the District of South Carolina. In March, the defendants filed a motion seeking partial summary judgment based on a government contractor immunity defense.

What Is the PFAS Government Contractor Defense?

The AFFF government contractor defense is very convoluted. But the gist of the argument is that the Military Specification Mil-F-24385 required contractors to provide firefighting foam to specific specifications, thereby insulating some of the defendants from state law tort liability. The defense will underscore that the Navy had a patent that was used that used PFAS.

Judge Richard Gergel is hearing alternative proposals from both sides on the best protocol for consolidating legal briefing on the government contractor defense. It is asserted by almost all of the various defendants in the litigation. Rather than receive hundreds of briefs of the different defendants, the court expressed a goal of a “single omnibus brief” on the issue. So far, both sides have submitted proposals, neither of which comes close to that goal.

We don’t know all the details because the motion (and opposition) was filed under seal, but we can expect a ruling on the motion this month or next month.

What Type of AFFF Cancer Lawsuits Is Your Law Firm Accepting?

Our lawyers are handling the following AFFF cancer lawsuits:

Our PFAS lawyers are also looking at ulcerative colitis, thyroid disease, and preeclampsia.

What our lawyers have been seeing in the Camp Lejeune water contamination lawsuits are large numbers of bladder cancer and kidney cancer claims, more than we expected based on statistics available on injuries and sicknesses from water contamination. 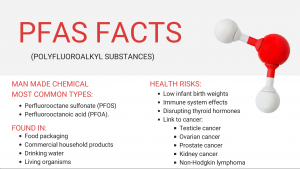 Per- and polyfluoroalkyl substances (PFAS) are man-made chemicals in everyday products such as food packaging, commercial household products, drinking water, and living organisms. They are not naturally occurring.

Starting in the 1940s, they were initially used in stain and water-resistant fabrics, carpeting, paints, cleaning products, and fire-fighting foams. One of the most famous PFAS-based brands is Teflon, first developed in the late 1930s.

The most commonly known PFAS are Perfluorooctane sulfonate (PFOS) and Perfluorooctanoic acid (PFOA). PFOS chemicals have a higher molecular weight and boiling point than PFOAs. The manufacturing of PFOS and PFOAs has been voluntarily phased out. However, they continue to be found throughout the environment.

Other PFAS examples include GenX and Perfluorobutanesulfonic acid (PFBS). GenX is a PFOA alternative used in the production of high-performing fluoropolymers. PFBS is an alternative to PFOS. Both these chemicals are still found in groundwater, surface water, and drinking water.

How can I get exposed to PFAS?

PFAS are significant because they are found everywhere. Symptoms of PFAS exposure are complicated because there are so many other causes.  So victims with PFAS symptoms move through the medical system without anyone attributing the symptoms to PFAS exposure.

One study detected PFAS in 97% of its blood samples. You may have to get exposed to PFAS from any of the following:

Over time, individuals may sustain adverse health effects due to increased PFAS levels in their bodies. The EPA reports that many PFAS-related studies indicate that exposure increases cholesterol levels.  They may also cause:

A March 2020 study published in the International Journal of Environmental Research and Public Health links PFAS to cancer. Researchers concluded that several PFAS show several attributes of carcinogens. They also found that all chemicals examined showed at least one characteristic, especially receptor-mediated effects. PFAS are prevalent, and this study shows how dangerous they are to the public.

A March 2013 study published in Environmental Health Perspectives concluded that high levels of PFOA exposure might be associated with cancers of the testicle, ovarian, prostate, and kidney. They are also associated with non-Hodgkin lymphoma.

The researchers analyzed 18 cases of cancer within nine years throughout several counties in Ohio and West Virginia that were near a DuPont-owned plant in Parkersburg, WV, which manufactured Teflon. Showing PFAS’ links to cancer further reinforces that this is a public health issue.

What is lymphoma? What is its significance to PFAS?

Lymphomas are cancer affecting the lymph system, comprising tissues and organs that produce and carry white blood cells. There are two types of lymphoma:

Lymphoma may be difficult to properly diagnose because it does not have symptoms distinct from other conditions. It can vary between a mild fever or even nothing noticeable. Signs and symptoms are usually mild, making it easy to miss them early on. If you suspect any signs, please visit your doctor as soon as possible.

Firefighters are especially at risk for PFAS-related adverse health effects.  Our firm handles firefighting foam lawsuits.  Both civilian and military firefighters use aqueous film-forming foam (AFFF) to extinguish jet fuel fires. Despite being highly effective, they are incredibly toxic.

Firefighters are exposed to PFAS from the following:

The fire foam chemicals firefighters have been exposed to are particularly lethal.  These chemicals easily bind to proteins in the blood.  So the body cannot shake off the PFAS like we can so many other toxic chemicals. They are called “forever chemicals” for a reason.

A 2018 International Pollutants Elimination Network (IPEN) study found that Australian firefighters had high PFAS levels in their blood. This indicates that firefighters’ use of AFFF makes them high risk for adverse health effects from PFAS than the general public.

Military firefighters have used AFFF on hundreds of military bases to extinguish pool fires. AFFF runoff may enter streams and contaminate waterways. They can also contaminate the soil through groundwater. This means that military personnel and their families face significant PFAS exposure as a result.

The Department of Defense reported that over 400 installations within the United States contain at least one area where PFOS/PFOAs are either known or suspected to have been found in groundwater. They have also found that 36 sites contained contaminated drinking water. This report shows that military personnel and their families are more at risk of PFAS exposure than the general public.

Some PFAS are no longer made in the United States. In 2002, the leading American PFOS manufacturer voluntarily phased out its production. In January 2006, the EPA invited eight major PFAS manufacturers to a program to phase out PFOA. The program’s goals were the following:

The following companies participated in this program:

EPA progress reports show these companies have met the PFOA Stewardship Program’s goals. However, despite these developments, PFAS remains prevalent throughout the environment.

Despite developments to reduce the manufacturing of PFAS, more needs to be done to reduce PFAS exposure. This may include further expansion of eliminating the production and emission of GenX and PFBS. The high PFAS level among fire departments and military facilities must be addressed. PFAS are hard to avoid because it is easy for them to contaminate soil and drinking water. This makes this a problematic public health issue to address.

Getting a PFAS Lawyer

Our law firm represents firefighters, soldiers, and airport workers in the PFAS class action lawsuit. Our law firm handles firefighting foam cancer lawsuits on a contingency fee basis. So there is no out-of-pocket cost or risk for you to get help from our PFAS lawyers.  We only receive no fees or expenses unless a recovery is obtained.