Our toxic baby food lawyers are currently seeking new cases from children (and their parents) who consumed HappyBaby baby foods and were subsequently diagnosed with autism.  Every day, parents reach out to our lawyers looking to see if there is a connection between the baby food their child at and a later autism diagnosis.

What is the backstory behind the the Happy Baby autism lawsuits?   HappyBaby is a popular baby food brand made by Nurture Inc. and sold at Walmart stores across the U.S.  Last year, an investigation found that many popular baby foods, including HappyBaby brand products, contain unsafe levels of toxic heavy metals such as mercury, lead, arsenic, and cadmium.

When infants and young children are exposed to these metals they can cause serious neurologic disorders, including autism which is the focus of these lawsuits.  But there has been no HappyBaby recall or warning placed on the product advising parents of the risks of toxic metals.

Certain heavy metals such as arsenic, lead, mercury, and cadmium are very damaging to the human body. Significant exposure to these metals has been shown to cause neurological problems in the developing brains of children. 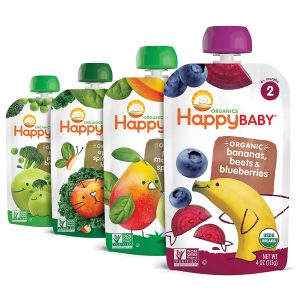 On February 4, 2021, a report was published by the U.S. House of Representatives Subcommittee on Economic and Consumer Policy entitled Baby Foods Are Tainted with Dangerous Levels of Arsenic, Lead, Cadmium, and Mercury (the “Congressional Report”). The Congressional Report details the findings of the Subcommittee investigation into the presence of toxic heavy metals in commercial baby foods. The Congressional Report found that HappyBaby and other popular brands of baby foods contain alarmingly high levels of toxic heavy metals: arsenic, lead, cadmium, and mercury.

The Congressional Report found harmful levels of toxic metals in baby food products from 7 of the biggest manufacturers in the U.S., including Nuture Inc., which sells baby food products under the popular brands HappyBaby and Happy Family Organics.

Inorganic arsenic is considered the worst and most harmful of all the heavy metals covered by the Congressional Report. Arsenic exposure in infancy and childhood has been associated with an increased rate of neurologic disorders and it can also damage the central nervous system.

Based on standards set by the FDA, the maximum safe level for arsenic in bottled water is 10 ppb. The Congressional Report found that Nurture (HappyBaby) sold baby food products after internal tests showed they contained as much as 180 ppb inorganic arsenic, 18 times the maximum limit. Over 25% of the HappyBaby food products sold by Nurture were found to contain over 100 ppb of inorganic arsenic and the average level of arsenic in HappBaby products was around 60 ppb — six times the safe limit.

The second most harmful of the heavy metals that are known to pose a threat to human health is lead. Lead exposure is harmful even at very small levels and it is associated with a range of adverse health conditions, particularly neurologic and cognitive developmental issues in children.

Mercury comes in behind only arsenic and lead in terms of the most toxic of the heavy metals at issue in the Congressional Report on baby foods. Current research has established that prenatal mercury exposure can directly cause adverse neurologic development. Mercury blood levels in toddlers have also been positively associated with increased rates of autism.

The FDA has established a maximum safe level of mercury for drinking water at 2 ppb. This is the lowest maximum safe level of all the heavy metals. Nurture was one of the few companies that tested products for mercury. These tests revealed that HappyBaby brand food products were sold containing as much as 10 ppb mercury, which is 5 times higher than the maximum safe limit set by the FDA.

Cadmium comes in at 4th on the list of the most dangerous toxic metals in baby foods. Exposure to cadmium at young ages has been linked to lower IQ and the development of various disorders such as ADD later in life. According to the FDA, the maximum safe limit for cadmium in drinking water is 5 ppb. The Congressional Report found that 75% of HappyBaby food products sold by Nurture contained cadmium over the 5 ppb max safe level.

Heavy Metals in Baby Food May Cause Autism

The health hazards of heavy metals have been understood for a long time. However, our toxic baby food lawyers have seen a growing body of medical evidence to suggest that exposure to these materials can lead to the development of autism, ADD, and other neurologic disorders. When children are exposed to these metals during infancy or gestation, they display higher rates of autism.

The impact of prenatal and early infancy exposures to mercury was the subject of a 2014 study which was one of the first to find a link between mercury and autism. The study found that environmental mercury exposure caused a twofold increase in the risk of being diagnosed with autism or ADD. In Korea, a very similar study was conducted and published in 2017 which found a similar association between exposure to mercury and autism/ADD rates.

In a 2019  meta-analysis study published by a research team at the University of Buffalo, arsenic exposure in infancy was found to be linked to higher autism rates. The following year, a much more comprehensive study was published which found the same positive association between exposure to mercury, arsenic, and cadmium during infancy and higher rates of autism.

Does HappyBaby have toxic metals in their baby food?  The Congressional Report revealing the shocking levels of toxic heavy metals in baby foods like Nurture’s HappyBaby brand products has led to a growing number of product liability lawsuits against Nurture by parents claiming that their children developed autism (or other disorders). These baby food lawsuits are partly based on the findings in the Congressional Report which make it very clear that Nurture and the other manufacturers knew that their baby food products contained heavy metals well above the maximum safe limits set by the FDA and decided to sell them anyway.

Since the Congressional Report was published in February 2021, Nurture Inc. has been named as a defendant in a growing number of consumer class action and product liability lawsuits involving toxic metals in baby food products. Every HappyBaby lawsuit in this litigation alleges the the toxic metal levels in this product is not safe for children.

Hiring a Lawyer Without Risk of Losing Money

Our firm is currently seeking parents who are considering filing a HappyBaby toxic baby food lawsuit because their child has autism. Call today for a free consultation at 800-553-8082 or get a free, no-obligation case review.  We are contingency fee lawyers so our attorneys only earn a fee if you get settlement compensation or a jury payout.