Current research and testing have shown that Gerber and other major brands of baby food contain dangerously high levels of toxic heavy metals such as lead, arsenic, and mercury. These harmful metals are well known to cause health complications and neurologic damage in developing children. The development of conditions such as ADHD and autism may be linked to the consumption of these toxic baby foods.

The product liability lawyers at Miller & Zois are currently seeking cases from children (and their parents) who consumed contaminated Gerber baby foods and were later diagnosed with neurologic health conditions such as autism.

Heavy metals like lead, arsenic, mercury, and cadmium are well known to be toxic to the human body. Many of them, such as lead and mercury, have been specifically linked to neurological problems in young children with developing brains. This is why keeping these metals away from children has been a major public health priority for many years. Unfortunately, recent research has shown that we may have actually been feeding these toxic metals to our children for years. 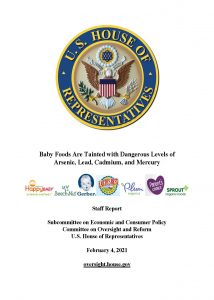 In 2021, the U.S. House of Representatives Subcommittee on Economic and Consumer Policy released a Staff Report entitled Baby Foods Are Tainted with Dangerous Levels of Arsenic, Lead, Cadmium, and Mercury (the “Staff Report”). The Staff Report detailed the Subcommittee’s findings from an investigation into claims that major baby foods like Gerber were being sold with high levels of toxic heavy metals. The Subcommittee investigation was based on lab test results and internal documents from baby food manufacturers.

The results of the investigation fully confirmed that Gerber and other commercial baby foods “are tainted with significant levels of toxic heavy metals, including arsenic, lead, cadmium, and mercury.” The Staff Report also noted that exposure to these contaminants is harmful to infant neurological development and brain function.

The Staff Report found unsafe levels of heavy metals in baby food products from 7 of the largest manufacturers in the U.S., including Gerber, which is the biggest baby food manufacturer in the world. The Staff Report details the levels of toxins found in the various food brands based on testing. The levels of toxic metals in Gerber were much lower compared to other major brands, but they were still well above the maximum safe levels set by the FDA.

Of all the toxin heavy metals covered by the Staff Report, arsenic is considered the most hazardous. In young children, exposure to arsenic is known to cause not only neurologic problems, but it can also damage the central nervous system.

Both the FDA and the EPA have set maximum safe arsenic levels for bottled water at 10 ppb. The Staff Report found that Gerber baby food products used ingredients that contained over 90 ppb inorganic arsenic based on lab testing. This is 9 times the FDA maximum safe level.

Lead is considered the second most toxic of the heavy metals that are known to post a threat to human health. Lead exposure (even at small levels) is associated with a range of bad health outcomes, particularly neurologic and cognitive developmental issues in children.

The FDA’s maximum safe level for lead is 5 ppb in drinking water, 20 ppb in juice and 100 ppb in candy products. According to the Staff Report, Geber used ingredients in its baby food that tested as high as 48 ppb for lead.

Mercury ranks 3rd behind arsenic and lead in terms of the most harmful of the heavy metals featured in the Staff Report on baby foods. Studies have shown that pre-natal exposure to mercury can lead to adverse neurologic development. More specifically, high blood levels of mercury in toddlers have been positively associated with “autistic behaviors.”

Mercury can be harmful even at extremely low levels. The FDA has capped the maximum safe level of mercury in drinking water at 2 ppb. The Staff Report does not contain information on the levels of mercury in Geber baby foods because the Subcommittee relied on information provided by Gerber. Gerber advised the committee that is does not test for mercury in its products.

Cadmium ranks fourth on the list of hazardous toxic metals in baby foods. Cadmium exposure in children has been linked to lower IQ and the development of ADHD. The FDA has set the maximum safe limit for cadmium in drinking water at 5 ppb. The Staff Report found that Gerber baby food products containing carrots were contaminated with cadmium. Over 75% of Gerber’s carrot foods contained over 5 ppb cadmium and some contained up to 87 ppb.

The toxic health effects of heavy metals are well recognized, but a growing body of scientific research is beginning to specifically connect exposure to these materials to autism, ADD, and other neurologic disorders. A number of medical studies have identified a connection between regular exposure to heavy metals during gestation, infancy, and childhood and higher rates of autism.

A study published in 2014 looked at the impact of prenatal and early infancy exposures to mercury. The study concluded that mercury exposure resulted in a twofold increase in the risk of developing both autism or ADD. Three years later, a similar study on children in Korea found a similar association between mercury exposure and autism/ADD rates.

A possible connection between arsenic exposure and higher autism rates was identified in a meta-analysis study conducted by a research team at the University of Buffalo and published in 2019. A more extensive study was published the following year which found the same positive association between autism and exposure to mercury, arsenic, and cadmium during infancy.

The Staff Report regarding heavy metals in baby foods like Gerber has led to a number of product liability lawsuits against Gerber by parents claiming that their children developed autism (or other disorders). These lawsuits are partly based on the findings in the Staff Report which clearly show that Gerber was aware of the fact that its baby food products contained heavy metals well above the maximum safe limits set by the FDA.

Since the Staff Report was published in February 2021, Gerber Products Company has been named as a defendant in a number of consumer class action and product liability lawsuits involving toxic metals in baby food products. Our firm is currently seeking Gerber toxic baby food lawsuits. Call today for a free consultation 800-553-8082.