Tasigna is a relatively new drug developed by Novartis for the treatment of leukemia. Not long after Tasigna was released in the U.S., evidence emerged indicating that Tasigna could cause a dangerous condition called atherosclerosis (narrowing of the blood arteries to the heart).

Plaintiffs’ lawyers claim that Novartis knew or should have known about this dangerous side-effect, but failed to include a warning in the prescribing information.

Users of Tasigna who suffered vascular damage from this undisclosed side-effect may be entitled to compensation for their injuries. Novartis has already been sued in a growing number of Tasigna lawsuits and a new “class-action” MDL has been created for consolidated handling of the Tasigna cases.

Our firm is currently seeking new Tasigna cases from anyone who used the drug and suffered atherosclerosis or another type of cardiovascular injury.

Tasigna (nilotinib) is a medication that was developed for the treatment of a specific type of leukemia called chronic myeloid leukemia (CML). CML is an uncommon type of leukemia in which cancer originates in the bone marrow eventually enters the bloodstream. Only about 15% of leukemia cases in adult patients are classified as CML.

Tasigna is a comparatively new medicine in the fight against cancer. It works by essentially blocking the transmission of certain proteins that fuel the growth of cancerous leukemia cells. This new drug was developed and patented by the pharmaceutical giant Novartis and it was first approved for use in the U.S. back in 2007. The typical dosage of Tasigna is 3000 mg twice a day.

Tasigna Can Cause Dangerous Cardiovascular Conditions

Following the initial U.S. release of Tasigna in 2007, a steady stream of evidence began to emerge suggesting that the drug was causing some patients to suffer dangerous and life-threatening side-effects involving the arteries and cardiovascular system. Specifically, a certain percentage of Tasigna patients were documented as having developed accelerated atherosclerosis.

So anyone who used the drug and suffered acute atherosclerosis or a related cardiovascular condition may be able to hold Novartis liable for financial compensation for their injuries, particularly if they have this drug-induced accelerated presentation of this heart disease.

A large number of Tasigna lawsuits have already been filed against Novartis. The plaintiffs in these cases are alleging that Novartis knew about the link between Tasigna and acute atherosclerosis, but intentionally concealed this issue to maximize profit. To date, over 125 Tasigna lawsuits are pending in courts across the country. The bulk of these cases were filed against Novartis in New Jersey state court.

At the start of August 2021, the Tasigna lawsuits pending in the federal courts were transferred into a newly created Tasigna MDL “class-action.” The 120+ cases pending state courts across New Jersey were similarly consolidated in Atlantic County as part of multi-county litigation (MCL), which is the New Jersey state court equivalent of an MDL.

At the end of this consolidated discovery, bellwether test trials will be held. The results of trials in class actions like this are typically used to facilitate a global settlement.

How will Novartis defend Tasigna lawsuits?  They will focus on the facts and avoid the law.  Novartis will argue that all these product liability claims preempted by federal law. Novartis contends that there was no newly acquired information after the FDA approved Tasigna that would have permitted the drug giant to change the label,

If you took Tasigna (or a generic equivalent) and suffered adverse cardiovascular events, you may be entitled to sue Novartis and get financial compensation for your injuries. Our firm is currently accepting new cases from anyone who was prescribed Tasigna for the treatment of leukemia and subsequently developed acute atherosclerosis or any of the following related conditions or events:

If you used Tasigna and later developed any of these conditions you may have a valid claim against Novartis.

We are still in the very beginning stages of the Tasigna product liability litigation, so it is purely speculative to estimate what the potential settlement value range might be for these cases.

But we can make some educated guesses based on results in prior mass tort cases involving similar injuries if this litigation is successful.  I don’t think these assumptions are pulled out of the air but if that is what you think, I can’t really argue with you. I agree it is pure speculation.

The potential value of a settlement payout in a Tasigna lawsuit will depend largely on the level of injury suffered by the plaintiff. Some Tasigna plaintiffs have suffered very serious injuries (and even death) as a result of acute atherosclerosis induced by Tasigna. Others have more moderate injuries.

Based on prior mass torts, I believe that if the Tasigna cases are successful, the verdicts will be in the multi-millions.  Mass settlements are a different story.  I think these cases have the following potential average settlement compensation payout value: 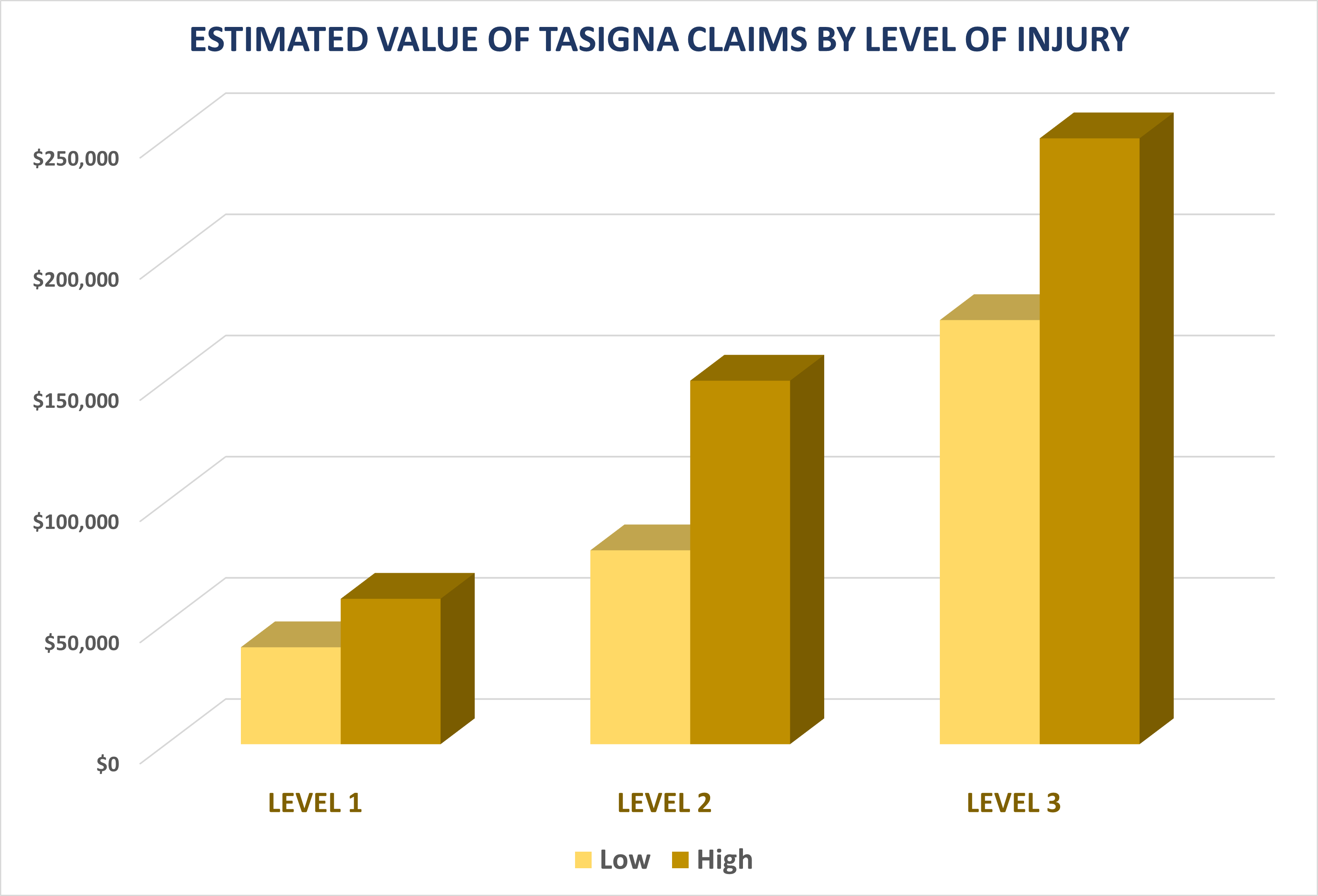 Can Tasigna cause cardiovascular damage?

Studies have shown that certain individuals who use Tasigna for the treatment of leukemia may develop acute atherosclerosis, a dangerous and potentially life-threatening cardiovascular condition.

Does Tasigna have a black box warning?

The prescription cancer drug Tasigna has a black box warning label that warns about the risk of QT prolongation – a dangerous condition involving an irregular heart rhythm. However, Tasigna does carry any warning about the risk of acute atherosclerosis, which is known to be linked to the drug.

Is Tasigna available in generic?

No. Tasigna is currently not available in generic version and is still protected by a patent held by Novartis.