What is Parkinson’s Disease?

Parkinson’s disease (PD) is a condition in which certain cells inside the brain decay and stop working properly. The specific brain cells impacted by PD are those that are responsible for the control of muscle movements. The deterioration of these cells impair the ability of the brain to send movement and coordination commands to the muscles in the body. As a result, individuals with PD suffer from non-voluntary or uncontrolled body movements such as shaking, tremors, stiffness or rigidity, and lack of coordination.

PD is a progressive disorder that gradually gets worse and worse over time. The movement symptoms associated with PD get significantly more pronounced as the disease continues to progress. Eventually, in the end stages of PD the brain’s ability to control muscle movements becomes so impaired that individuals may be unable to walk and perform other vital functions.

The specific symptoms of PD will vary in each person, but they primarily involve involuntary movements of the body. Some of the earliest symptoms on PD may be barely noticeable. Symptoms typically begin on one side of the body.

Common symptoms associated with PD include:

PD occurs when specific neurons in the brain decay and die, leading to abnormal brain functioning and impaired movements. The exact causes of PD are unknown, but there are at least 2 known factors that play a role in the development of PD.

Genetics: the first risk factor for PD is genetics. Research has identified certain gene variations that appear to be associated with an increased risk of PD. There are also certain genetic changes that are linked to PD.

Chemical Exposure: recent medical research has discovered that long-term exposure to certain toxic chemicals, including pesticides and herbicides, may cause PD.

There are a number of more general risk factors for PD that should be mentioned. These are age and gender. Old people are more likely to develop PD and the average age at diagnosis is over 60. Men are also more likely to get PD compared to women.

There is no effective treatment to cure or reverse the degenerative process inside the brain that causes PD. Treatment for PD is aimed at helping to alleviate the symptoms caused by the condition.

Medication is the primary treatment option for PD. Medication can be used to help manage the movement difficulties associated with PD. Unfortunately, the effectiveness of these medications diminishes over time.

Paraquat is an industrial-strength herbicide that is used in commercial agriculture. Over the last decade, a growing body of research has emerged which shows that chronic exposure to Paraquat can significantly increase the risk of Parkinson’s disease.

Camp Lejeune is a big military base in North Carolina. From 1963 to 1987 the water supply at Camp Lejeune was highly contaminated with a number of highly toxic chemicals. Subsequent health studies have shown that exposure to this toxic water increased the risk of certain diseases.

A new federal law passed this year is allowing victims of the Camp Lejeune water contamination the right to bring civil lawsuits for their injuries. Parkinson’s disease is one of the most common injuries alleged by plaintiffs filing a Camp Lejeune lawsuit. 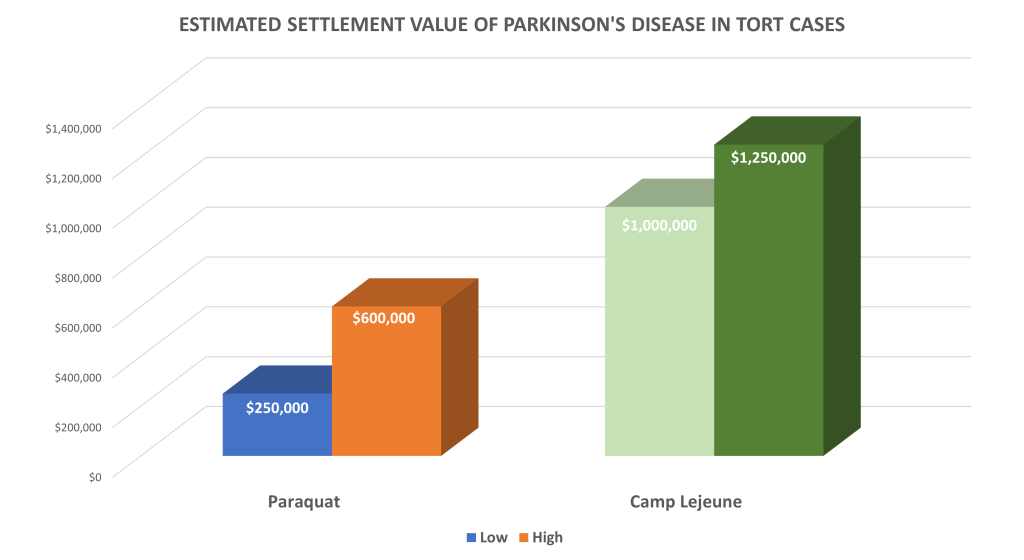