Mississippi law and Mississippi jurors give slip-and-fall victims a fair shake.  Here are some recent slip and fall cases in Mississippi.

Below are recent Mississippi slip and fall cases.  A few years back in the Hattiesburg American, there was an article that slip and fall lawsuits in Mississippi were on the rise.  The article offers nothing substantive to support the premise; the opposite may be true.  We see fewer reported Mississippi slip-and-fall settlements and verdicts in 2023.

When someone slips and falls on someone else’s property, they may have the right to file a personal injury lawsuit against the property owner or occupier. The purpose of a slip and fall lawsuit is to recover compensation for damages such as medical expenses, lost wages, and pain and suffering.

Elements of a Successful Mississippi Slip and Fall Claim

In order to succeed in a slip and fall claim in Mississippi, the plaintiff must prove three elements:

But Missouri law does impose a duty on businesses to its customers to exercise ordinary care and to keep the premises reasonably safe while warning invitees of dangerous conditions known to the store owner. Munford Inc. v. Fleming, 597 So.2d 1282, 1284 (Miss. 1992).

In Munford, the Mississippi high court set forth the standard a plaintiff must meet to recover in a slip and trip case:

This is a reasonable standard that is shared by most states.

What Damages Can Be Recovered in a Mississippi Slip and Fall Case?

In a Mississippi slip and fall lawsuit, the plaintiff may be able to recover:

Mississippi follows the doctrine of pure comparative negligence, which means that the plaintiff’s recovery in a personal injury case can be reduced by their own degree of fault. In other words, if the plaintiff is found to be partially at fault for their injury, their damages will be reduced proportionately.

For example, if a slip and fall victim is found to be 10% at fault for their injury, their damages will be reduced by 10%. This means that if the victim is awarded $1,000,000 in damages, they will receive $900,000 because of the reduction for comparative negligence.

So some negligence on the plaintiffs’ part is not a bar to recovery but it can reduce the amount of the verdict.

Just because you fell in a Missouri store does not mean you have a claim.  Under Mississippi law,  the store owner is not an insurer of the business invitee’s injuries.  Proof of a fall or even that a fall occurred and the floor had litter and debris is not enough to support a premises liability claim in slip and fall cases. Sears, Roebuck & Co. v. Tisdale, 185 So.2d 916, 917 (Miss. 1966). 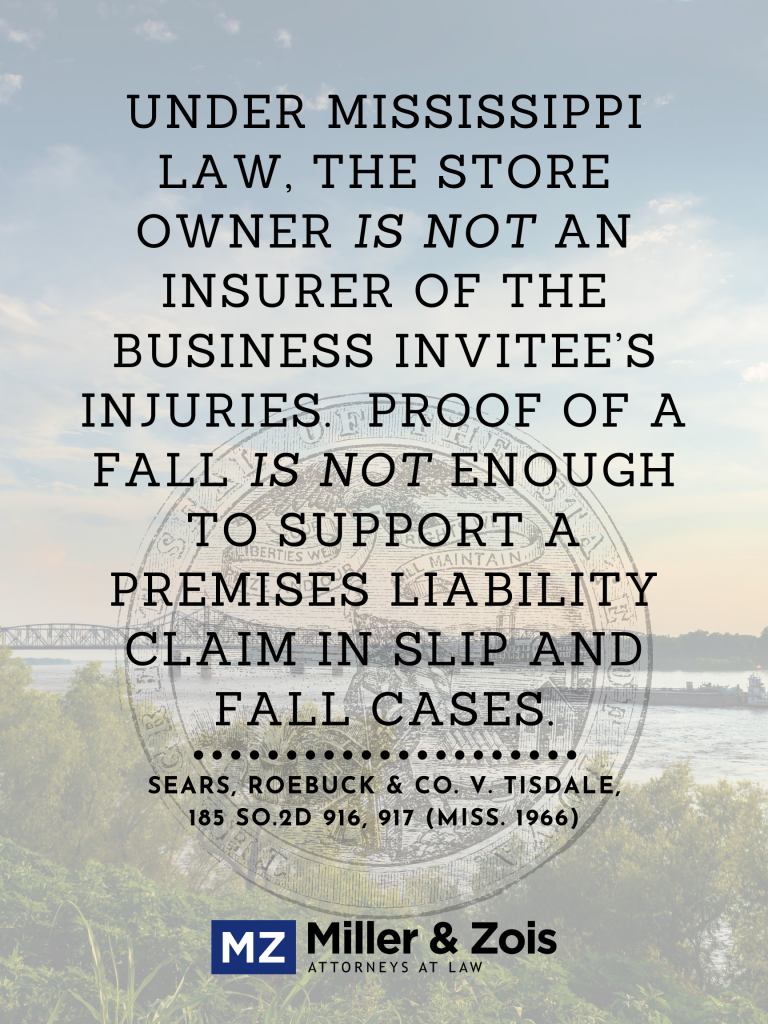 Example Case of Judges Denying  a Victim a Jury Verdict

While the law and jurors may be fair to Mississipians, judges are not always as fair.

The plaintiff, an Air Force doctor (a plaintiffs’ lawyer’s dream plaintiff), sued the airport after he slipped and tripped down a wet set of aluminum steps. It was a real fall: he fell down two stories of steps.

The airport sought summary judgment under the dreadful Mississippi Tort Claims Act. The argument was twofold. First, they alleged that the airport had immunity under the MTCA because the dangerous condition plaintiff alleged was open and obvious to one exercising due care.

The second – and more annoying – is that the airport is immune from suit because the alleged acts or omissions of the airport were discretionary functions.

One of the biggest exceptions to governmental liability under the local government tort claims act is the discretionary function exception. The Federal Tort Claims Act has the same exception. The doctrine is controversial and has lead to just a ton of lawsuits.

The discretionary function exception protects the government from liability for any claim based upon the exercise or performance, or the failure to exercise or perform a discretionary function or duty on the part of a government employee. The idea was to prevent judicial second-guessing of legislative and administrative decisions for which there was a good reason – grounded in social, economic, and political policy – regardless of whether a personal injury claim might be implicated.

In other words, Dr. Pratt’s lawsuit was not the question of whether to apply the tape, instead, it was based on the failure to apply the tape they decided to apply. So, seemingly, this would take the case out of the discretionary function ballpark.

The Mississippi high court disagreed, finding that the “day-to-day operational activities at issue in this case involved choice and judgment, because there are no laws or regulations dictating how those activities are to be performed.” So, without a statute to guide the employee, the court did not want to second guess his judgment, even though it was, you know, awful.

Under this interpretation, I think the exception engulfs the rule.

Looking for Help with Your Claim?

If you were hurt and believe you have a potential civil tort claim, click here for a free no-obligation consultation.