Cowboys star wide receiver CeeDee Lamb was sued last week by a sports memorabilia and trading card company after Lamb allegedly breach a contract with the company by failing to autograph a certain number of player cards.

The lawsuit drew some attention because sports memorabilia companies rarely sued players for this sort of thing.

Literally, since I started writing this piece,  the lawsuit became moot. Yesterday afternoon the memorabilia company announced on Twitter that Lamb had fulfilled his obligations under the contract.   Because often filing a lawsuit is what is needed to wake someone up who is not fulfilling their obligations.  But I finished the post because it is a good story.

Cedarian Deleon “CeeDee” Lamb was born in New Orleans, Louisiana, but his family was forced to relocate to Houston, Texas after Hurricane Katrina in 2005. Lamb went on to become a standout in football at John and Randolph Foster High School (JRFHS) in Richmond, Texas. 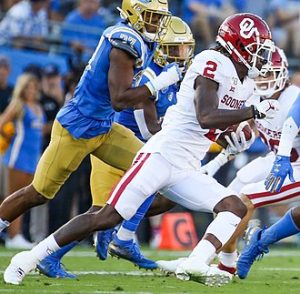 At Oklahoma, Lamb had the benefit of playing with some of the best college quarterbacks in the game. In his freshman year, Lamb posted 807 receiving yards catching passes from eventual Heisman Trophy winner and No.1 overall draft pick Baker Mayfield. Lamb had 1,100 yards in his sophomore season in 2018 when his quarterback was another future No.1 overall pick, Kyler Murray. Jalen Hurts (who finished 2nd in Heisman Trophy voting) was his quarterback in Lamb’s junior year and he had 1,327 yards and 14 touchdowns.

After his junior year, Lamb declared himself eligible for the NFL draft. Lamb was drafted by the Dallas Cowboys as the 17th pick in the first round of the 2020 NFL Draft. Lamb was the 3rd highest wide receiver taken in the draft that year. In his rookie season with the Cowboys, Lamb posted 74 catches for over 900 yards (2nd among rookie WRs). In his second season, Lamb led the Cowboys with 79 receptions to go along with 1,102 yards and he was voted to the Pro Bowl.

Leaf Trading Cards, LLC (“Leaf”) is a company based in Dallas, Texas that produces sports player trading cards and other sports collectibles and memorabilia. Leaf is primarily focused on producing unique sports player cards for the 4 major sports (football, basketball, baseball, and hockey) as well as secondary sports such as MMA, wrestling, etc.

Unlike the major sports player trading card companies, Leaf does not have a licensing deal with any of the 4 major professional sports leagues or their player unions. This means that Leaf cannot produce player cards showing professional players in their pro-team uniforms.

Until recently, Leaf’s lack of a licensing deal with the major sports leagues and player unions forced the company to focus on niche sports without licensing lockouts. Following the recent developments giving college players the right to profit from their name-image-likeness (known as “NIL rights”), however, Leaf has been able to produce and sell cards featuring high profile college players.

CeeDee lamb was already a star in college football at a very high-profile program when a series of legal decisions in the federal courts (eventually upheld by the Supreme Court in Nat’l Collegiate Athletic Assoc. v. Alston) gave college players to freedom to profit from their NIL rights. Lamb was among many college players who took advantage of this.

While he was still a player at Oklahoma, Lamb entered into a long-term contract with Leaf. Under the terms of the contract, Lamb agreed to sign a certain number of player cards (which featured Lamb in his Oklahoma uniform) and other collectibles. The details of how much Lamb was paid and how many cards he was supposed to sign have not been disclosed.

Early on, apparently, Lamb fulfilled his autograph signing quotas under the contract with Leaf. But the contract began when Lamb was a college player with no income, at which point he was probably thrilled to sign the cards and get the money. But the Leaf contract continued after Lamb was drafted by the Cowboys and received a 4-year, $14 million contract (with a $7.7 million signing bonus).

Once Lamb was making millions in the NFL, he clearly was less motivated to spend hours autographing cards for Leaf. At some point after becoming a Cowboy, Lamb stopped fulfilling his regular autograph quotas under the contract with Leaf.

This put Leaf in an awkward situation because they apparently were continuing to sell “pre-orders” for autographed CeeDee Lamb player cards. When Lamb stopped signing the cards as agreed under the contract, Leaf ran out of actual signed cards to ship out and started giving customers some type of IOU that was redeemable for the signed card.

Lamb continued to ignore his obligations to sign the cards and, eventually, the pressure to satisfy customers prompted Leaf to take drastic measures. In early May 2022, Leaf filed a civil lawsuit against Lamb in the District Court for Denton County, Texas.

The lawsuit asserted a claim against Lamb for breach of contract based on his failure to sign additional cards as originally agreed. The lawsuit did not specify the amount of damages being sought, except that it was under $100,000.

The Leaf lawsuit against Lamb grabbed a lot of attention from sports news outlets because sports memorabilia and trading card companies never sue players for this sort of contractual dispute. But the circumstances that lead to the Leaf lawsuit originated from the unique situation that arose when college players obtained NIL rights.

Leaf is not a big-boy card company with a multi-million-dollar licensing deal with the NFL. Rather, they are a smaller company seeking to capitalize on NIL rights by entering into smaller deals with individual college players, like Lamb, before they start making millions. This could be the start of a new trend in pro sports contracts.

Only a week after Leaf filed its lawsuit (and before Lamb was even served with the summons for the lawsuit) the whole dispute became moot because Lamb fulfilled his contract obligations. Yesterday afternoon, Leaf posted a thank you to Lamb on its Twitter account:

Leaf is pleased to announce that Ceedee Lamb has returned cards to Leaf, as of this afternoon. We hope to have these checked in so redemptions can begin filing on Thursday. Thank you @CeeDeeThree for promptly addressing the issue. PS- ON CARD signatures!

Leaf will presumably be dismissing the lawsuit against Lamb in light of his compliance with the agreement.