Our Camp Lejeune toxic water attorneys are handling lawsuits in all 50 states.  This page is about the symptoms of water contamination and the settlement payouts you can expect in these lawsuits.

As anyone reading this know, the bad water at Camp Lejeune has caused countless suffering. For decades the water was contaminated with toxic chemicals known to cause cancer and a host of other serious diseases and health conditions. Hundreds of thousands of service members and civilians drank, bathed in, cooked with, and swam in that water. Now the former residents and employees of Camp Lejeune are suffering the devastating consequences of this exposure.

Camp Lejeune is a United States Marine Corps base located just outside of Jacksonville, North Carolina. The base was established in 1941 and it has served as a major training and service facility for the Marine Corps.

From the early 1950s to the mid-1980s, nearly one million individuals, including service members, their families, and others, resided at the base at various points in time.

The Marine Corps supplied water to service members and other residents of Camp Lejeune. The base’s water was extracted from a large number of wells, treated at a handful of water treatment plants, and then distributed to residents using a network of distribution pipes.

Beginning in the mid-1950s, toxic chemicals from various sources, including unlined landfills and leaking storage tanks, seeped into the soil and groundwater of Camp Lejeune and ultimately contaminated many of the wells used to supply the water treatment plants.

How Bad Was the Water at Camp Lejeune?

The base population at Camp Lejeune was served by 3 main water supply systems: Tarawa Terrace (beginning in 1952); Holcomb Boulevard (starting June 1972); and Hadnot Point (beginning in 1942). Those systems consisted of a collection of wells, a water treatment plant, and a distribution system. 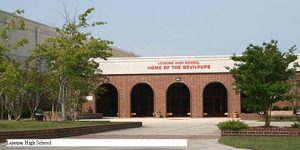 Studies on the Impact of the Camp Lejeune Water Contamination

A number of public health agencies led by the Agency for Toxic Substances and Disease Registry (ATSDR), which is part of the CDC, have done extensive studies over the years to evaluate what impact the toxic Camp Lejeune water had on the long-term health of base residents.

In 2017, ATSDR published its “Assessment of the Evidence for the Drinking Water Contaminants at Camp Lejeune and Specific Cancers and Other Diseases.” As part of its mandate, ATSDR completed several epidemiological studies to determine if Marines, Navy personnel and civilians residing and working on U.S. Marine Corps Base Camp Lejeune were at increased risk for certain health effects as a result of exposure to water contaminated with volatile organic compounds.

On three separate occasions, the federal government (or its agencies) has expressly acknowledged a causal connection between specific diseases and the contaminated water at Camp Lejeune.

In 2017, the VA issued a regulation stating that veterans who served at Camp Lejeune between 1953 and 1987 and were later diagnosed with 1 of 8 diseases that would be considered “presumptively” related to the toxic water. The 8 VA presumptive diseases were: liver cancer, Parkinson’s disease, bladder cancer, kidney cancer, adult leukemia, multiple myeloma, aplastic anemia (and other myelodysplastic syndromes), and non-Hodgkin’s lymphoma.

Finally, the 2017 ATSDR report concluded that a causal relationship exists between the following diseases and the contaminants in the Camp Lejeune water supply or a causal relationship is at least as likely as not: kidney cancer; non-Hodgkin’s lymphoma; multiple myeloma; leukemia; liver cancer; bladder cancer; Parkinson’s disease; end-stage renal disease; systematic sclerosis/scleroderma; and cardiac defects.

What Diseases Were Caused by the Camp Lejeune Contaminated Water?

The diseases connected to the Camp Lejeune water can be grouped into two tiers based on the strength of the scientific causation evidence, and whether the federal government has previously recognized a connection between the disease and the Camp Lejeune water.
The section below lists the diseases caused by the contaminated water at Camp Lejeune and divide them into 2 separate tiers. Disease and conditions listed in Tier I are those with the strongest causation evidence and which the government has previously identified as being “presumptively” connected to Lejeune. Tier II includes diseases with less evidence of causation that have not been identified as presumptively connected to Camp Lejeune.

Diseases listed in Tier I are those that have the strongest evidentiary support for a causal connection to Camp Lejeune. All of the Tier I diseases listed below were previously recognized as presumptively related to the contaminated water at Camp Lejeune either by the VA, the ATSDR or in the Ensminger Act.

The diseases and health conditions listed in Tier II are those in which the causation evidence linking them to Camp Lejeune is not as strong as those conditions in Tier I. The connection between these conditions and the Camp Lejeune water is still compelling, however, and many of them were listed in the Ensminger Act which awarded benefits to Lejeune veterans.

Below, our attorneys provide estimated payout values for successful Camp Lejeune lawsuits or claims under the CLJA for each of the specific diseases linked to the contaminated water.

Payout Value for Camp Lejeune Kidney Cancer Cases = $150,000-325,000. The causal link between kidney cancer and the Camp Lejeune water is exceptionally strong, which makes these good cases. Compared to other types of cancer, however, kidney cancer has a high survival rate and good prognosis which drives down the value somewhat.

Payout Value for Camp Lejeune Liver Cancer Cases = $190,000-$550,000. Liver cancer is dangerous with low survival rates. Liver cancer was not initially covered in the Ensminger Act, but it was later listed as a presumptive Camp Lejeune disease in both the ATSDR Report and the VA Regulation, so the causation evidence is pretty solid.

Payout Value for Camp Lejeune Bladder Cancer Cases: $145,000-$220,000. Causation for bladder cancer is strong and it was listed as a Camp Lejeune-related disease in all of the actions by the federal government. Bladder cancer is comparable to kidney cancer in terms of survival rate, so they have a similar value.

Payout Value for Camp Lejeune Parkinson’s Disease Cases = $275,000-600,000. Parkinson’s is a debilitating disease that never goes away and gets progressively worse with time. This makes it a high value injury. Although Parkinson’s was not initially named as a covered condition in the Ensminger Act in 2012, both the ATSDR and VA later recognized the link so causation is solid.

Payout Value Estimate for Camp Lejeune Leukemia Cases = $150,000-350,000. Leukemia (and other blood cancers) have been conclusively linked to the Camp Lejeune water. The only thing keeping the value of leukemia cases lower is that it has a high survival rate.

Payout Value Estimate for Camp Lejeune Birth Defect Cases = $750,000-$1,500,000. There is compelling causation evidence for birth defects and in-utero exposure to the Camp Lejeune water. Birth defects that result in lifelong disabilities will be some of the highest value cases because they involve long-term medical care and major mental suffering.

Payout Value Estimate for Camp Lejeune Breast Cancer Cases = $150,000-$350,000. Breast cancer is a “Tier II” Camp Lejeune disease because although it was covered under the Ensminger Act, it was not listed as a presumptive condition by either the ATSDR or VA. There is still a good case for “more likely than not” causation under the CLJA.

Payout Value Estimate for Camp Lejeune Aplastic Anemia Cases = $110,000-$205,000. Another one where the causation is solid, but the disease has a high survivability rate compared to other, which limits its potential value. 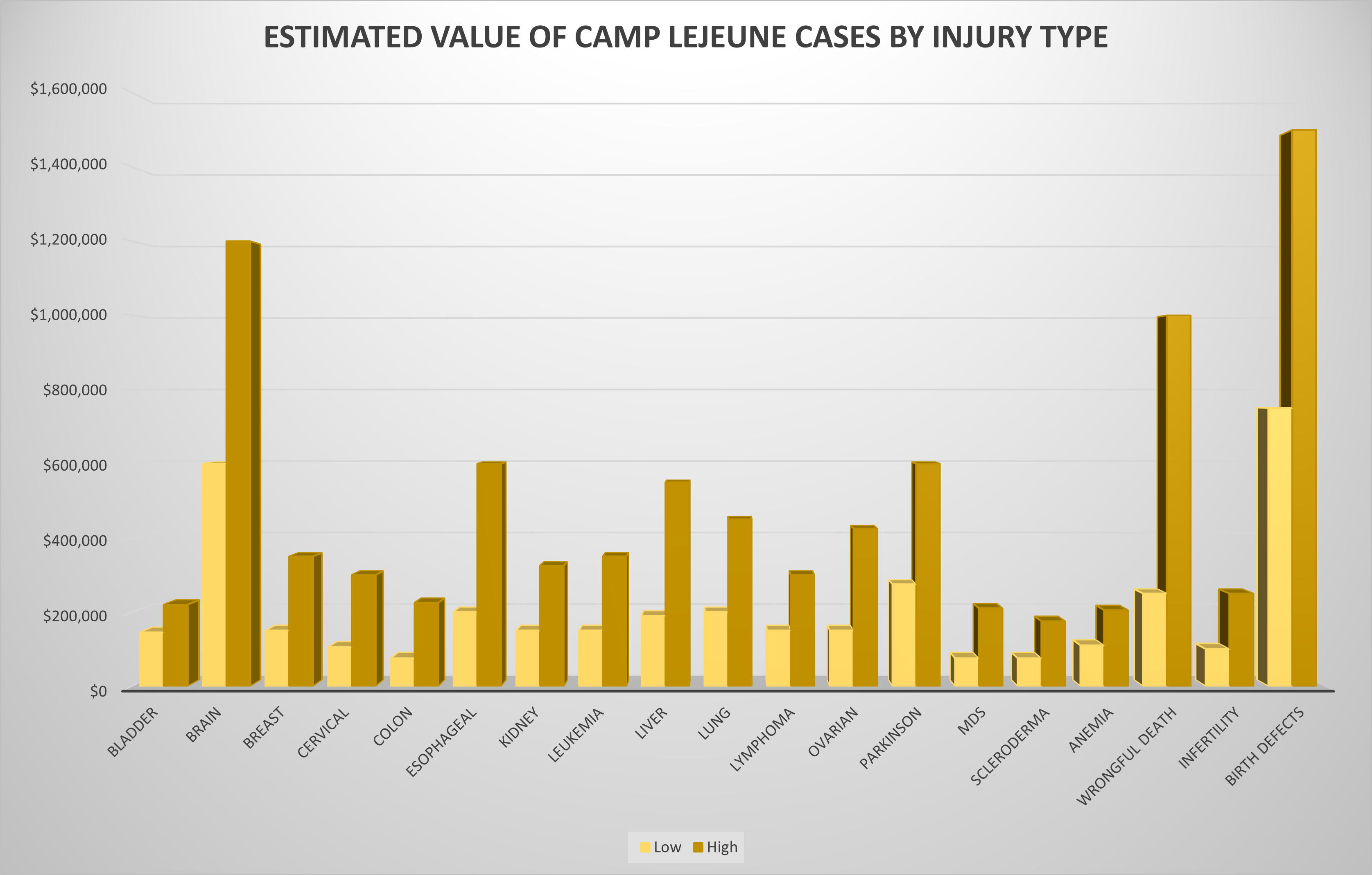 Who is Eligible to File a Camp Lejeune Lawsuit?

Millions of people who lived or worked on the Camp Lejeune Marine Corps base in North Carolina were exposed to toxic chemicals in the water supply. Now the federal government has passed a new law giving victims of the Camp Lejeune water contamination the right to bring civil lawsuits and get compensation. In this post, we will explain exactly who is eligible to bring a Camp Lejeune lawsuit under the new law and how to initiate a case.

The eligibility rules for bringing a Camp Lejeune lawsuit are set forth very clearly in the newly enacted Camp Lejeune Justice Act (§ 804 of the “Honoring Our PACT Act of 2022”). Subsection (b) of the CLJA provides a clean, precise definition of who will be eligible to bring a claim for harm related to the Camp Lejeune water contamination:

An individual, including a veteran, . . . or the legal representative of such an individual, who resided, worked, or was otherwise exposed (including in utero 22 exposure) for not less than 30 days during the period beginning on August 1, 1953, and ending on December 31, 1987, to water at Camp Lejeune, North Carolina. . . . May bring an action in the United States District Court for the Eastern District of North Carolina to obtain appropriate relief for harm that was caused by exposure to the water at Camp Lejeune.

In broad terms, this statutory language states that anyone who can show that they were exposed to the toxic Camp Lejeune water for at least 30 days will be eligible to pursue a claim under the CLJA. Below are some key points to understand about the eligibility parameters under the CLJA.

Many people assume that the CLJA is a law that applies only to military veterans. This is not true. The language of the CLJA is intended to give both veterans and civilians the right to bring Camp Lejeune lawsuits. Anyone who worked, lived, or was “otherwise exposed” to the contaminated water at Lejeune can bring a case under the CLJA.

Eligible plaintiffs under the CLJA could include:

If the individual or veteran who lived or worked at Camp Lejeune has already died, their “legal representative” will be eligible to bring a case on their behalf.

Individuals who never lived or worked at Camp Lejeune, but who suffered in utero exposure to the contaminated water (because their mother lived on base during pregnancy) will be eligible to bring claims under the CLJA.

To be eligible to bring a lawsuit under the CLJA, prospective plaintiffs must show that their exposure to the water at Camp Lejeune (either as a resident, employee, fetus, or otherwise) lasted for a cumulative total of at least 30 days. Moreover, all 30 of the days must have occurred during the recognized contamination period (August 1953 to December 1987).

Your DD214 may incorrectly show that you or you loved one was not there for 30 days.

This is not uncommon. Training exercises often not included on a DD214. Moreover, these old records are sometimes just wrong. In these cases, our lawyers look for other ways to prove 30 days, including an affidavit from the victim or the family.

If you or a member of your family may have developed a serious illness or disease from the Camp Lejeune water contamination, contact our office today to see if you can potentially bring a civil lawsuit and get financial compensation. Call us at 800-553-8083 or contact us online.