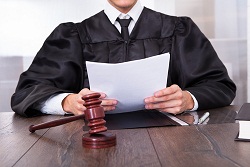 Bellwether trials are the first trials in a mass tort case. Cases are selected for trial that are thought to be representative of a particular issue in other cases in the class action. While the results of the trial are not binding on anyone other than the parties to the trial, the results are considered to be instructive on the value of the cases.

Why are they called “bellwether”?  It is a good question.  I never had any idea.  In fact, for the first few years of my career, I spelled it as “bellweather” trials.  No one ever corrected me.  But apparently the genesis of the use of the word bellwether comes from belling a wether, which is a male sheep, who is elected to lead a group of sheep.  The farmer would determine whether the wether was a good choice for the bell if the flock seemed to trust the sheep who had the bell.  How this made its way in the MDL mass tort lexicon is anyone’s guess.

Bellwether trials are used in MDLs.  An MDL is not a class action, although they are often referred to as class actions as I already did above.  In an MDL, mass tort claims are consolidated for litigation discovery before trial but each case is not tried as a group as you would in a real class action.  Instead, each case is tried individually.

Why Do Bellwether Trials Often Help Get Cases Settled?

Cases do not settle for one primary reason: the parties disagree on the value of the claims.  The goal of bellwether trials is to give both plaintiffs and defendants a dose of real reality in terms of who is likely to win the case and the amount of damages a jury might award.  So the idea of these test balloon trials is to gauge how real juries will decide these cases.  Both parties tend to think their side will prevail or that the damages will come out their way.

How Are the Cases Selected?

There are four ways.  Bellwether plaintiffs may be chosen by:
Most courts have selected the hybrid option of giving the class attorneys and the defense lawyers a say in the process. However, the court makes the ultimate call as to which cases will go to trial and the order in which they will proceed.
Defense lawyers will do anything to try to get plaintiff lawyers to try their worst cases because they want to quell the hopes of the entire class and their attorneys.  They do this by pushing the worst cases imaginable to go first and by settling the best cases on the bellwether list confidentially to move on to the weaker cases. Conversely, of course, plaintiffs’ lawyers are doing whatever they can to try their best cases first.

Will My Case Be One of the Bellwether Cases?

Statistically, your case is unlikely to be one of the bellwether cases that go to trial.  Typically, only a small number of cases are selected so the odds against an individual plaintiff being chosen is low.  Being a bellwether case is a mixed bag.  It certainly gives you the best chance to hit a home run and get full value for your case, an outcome that generally eludes plaintiffs that settle in a class. But there is also the risk of losing the case and getting nothing. Being the bellwether case is high risk and high reward.

Getting Help with Your Tort Claim