This post speculates about Zantac lawsuit settlement amounts.  Yes, it is impossible to know what the average compensation payout might be in the Zantac litigation at this stage.

But projecting settlement amounts is what stock analysts and shareholders for Sanofi-Aventis, Boehringer Ingelheim, Pfizer, and GlaxoSmithKline are already doing and baking those costs into the stock price.  Plaintiffs’ Zantac lawyers can do this as well.

So this post will look at how much these Zantac lawsuits might eventually be worth based on comparisons to other mass tort settlements involving cancer.

It was recently discovered that the popular heartburn drug Zantac contained a hidden carcinogenic chemical. This has led to thousands of Zantac lawsuits by people who regularly used the drug and were subsequently diagnosed with cancer. The Zantac lawsuits in the federal courts have been consolidated into a “class action” MDL and the first cases are expected to go to trial at the end of 2022.

About the Zantac Lawsuits

Zantac (ranitidine) is an antacid that has been around since the 1980s and was available in both prescription and over-the-counter form. GlaxoSmithKline originally developed and released Zantac but it was widely available in generic versions manufactured by various companies.

In 2017, Zantac was used on a regular basis by 15 million people in the U.S. Many of these Zantac users took the drug every day for long time periods under the assumption that it was perfectly safe.

In 2018, random quality testing found that the popular drug contained very high levels of a chemical called NDMA (N-Nitrosodimethylamine). NDMA is highly toxic to the human body and is a known carcinogen. The levels of NDMA in Zantac were so high that the FDA issued a public safety warning and Zantac was promptly pulled off retail shelves across the country.

This quickly led to a wave of Zantac lawsuits by individuals claiming that their exposure to NDMA in Zantac caused them to develop cancer. Over 70,000 Zantac lawsuits have been filed and consolidated into a Zantac MDL in the District of New Jersey.

Zantac Lawsuits Should Be Resolved in a Global Settlement

At this stage, we don’t know exactly how much Zantac lawsuit individual settlement compensation payouts might be. But we can be fairly certain that they will eventually be resolved in a global settlement. This is how all consolidated mass torts eventually get resolved (if they are not dismissed – that is not an unimportant caveat).

Since the formation of the Zantac MDL in 2019, the MDL judge has presided over a consolidated civil discovery process while more Zantac cases have continued to be filed. The discovery phase has focused on the development of scientific causation evidence on both sides.

The discovery phase of the Zantac litigation will conclude next year and then the litigation will move into the bellwether trial phase. This is where jury trials are held in a handful of sample Zantac cases. The results of these test trials are used to facilitate settlement negotiations in which the defendants agree to pay a large sum for the resolution of all remaining Zantac lawsuits. In mass torts, this is referred to as a “global settlement.”

What Will a Global Settlement in the Zantac Litigation Look Like?

Here is a simplified summary of how global settlements work out in most mass torts like the Zantac litigation. Let’s say Acme Pharmaceutical is defending 20,000 lawsuits in an MDL by plaintiffs claiming that Acme’s new drug caused them to develop cancer. After 2 years of consolidated discovery, 10 of the 20,000 cases are selected for “bellwether trials.” The plaintiffs pick 5 cases and Acme picks 5 cases.

The first 3 of these bellwether cases go to trial. The first trial resulted in a $20 million verdict for the plaintiff. The second trial results in a defense verdict. The third trial ends in a $5 million verdict. Following the 3rd trial, Acme announces that it is ready to negotiate a settlement, and the remaining trials on put on hold. 6 months later the MDL judge approves a global settlement under which Acme agrees to pay a total sum of $5 billion to settle all 20,000 pending cases.

If the $5 billion were divided evenly it would result in a gross payout of $250,000 to each plaintiff. But the settlement arrangement includes a complicated tiered system in which each plaintiff is ranked based on the severity of their injuries (and other factors). Plaintiffs ranked in the highest tiers get larger payouts and those in the lower settlement tiers get smaller payouts.

This is an overly simplified example of what the global settlement in the Zantac litigation should eventually look like. The only thing we don’t know at this point is how much the defendants will have to pay out for the settlement. The size of the settlement payout will depend on (1) how many Zantac lawsuits are pending at the time, (2) how strong the causation evidence is, and (3) the results of the first bellwether trials.

At this stage, it is not possible to know for certain how much the settlement payout will be for Zantac lawsuits. We can, however, make an educated guess based on settlement payouts in prior mass torts involving similar injuries (i.e., cancer from product exposure).

Based on prior settlements, we think Zantac cases in the highest settlement tiers (plaintiffs with the most types of cancer and longest use history) could get settlement payouts of around $300,000-$400,000.

Cases in the third settlement tier would get less than $40,000-80,000. There could potentially be even lower settlement tiers with payments under $40,000. 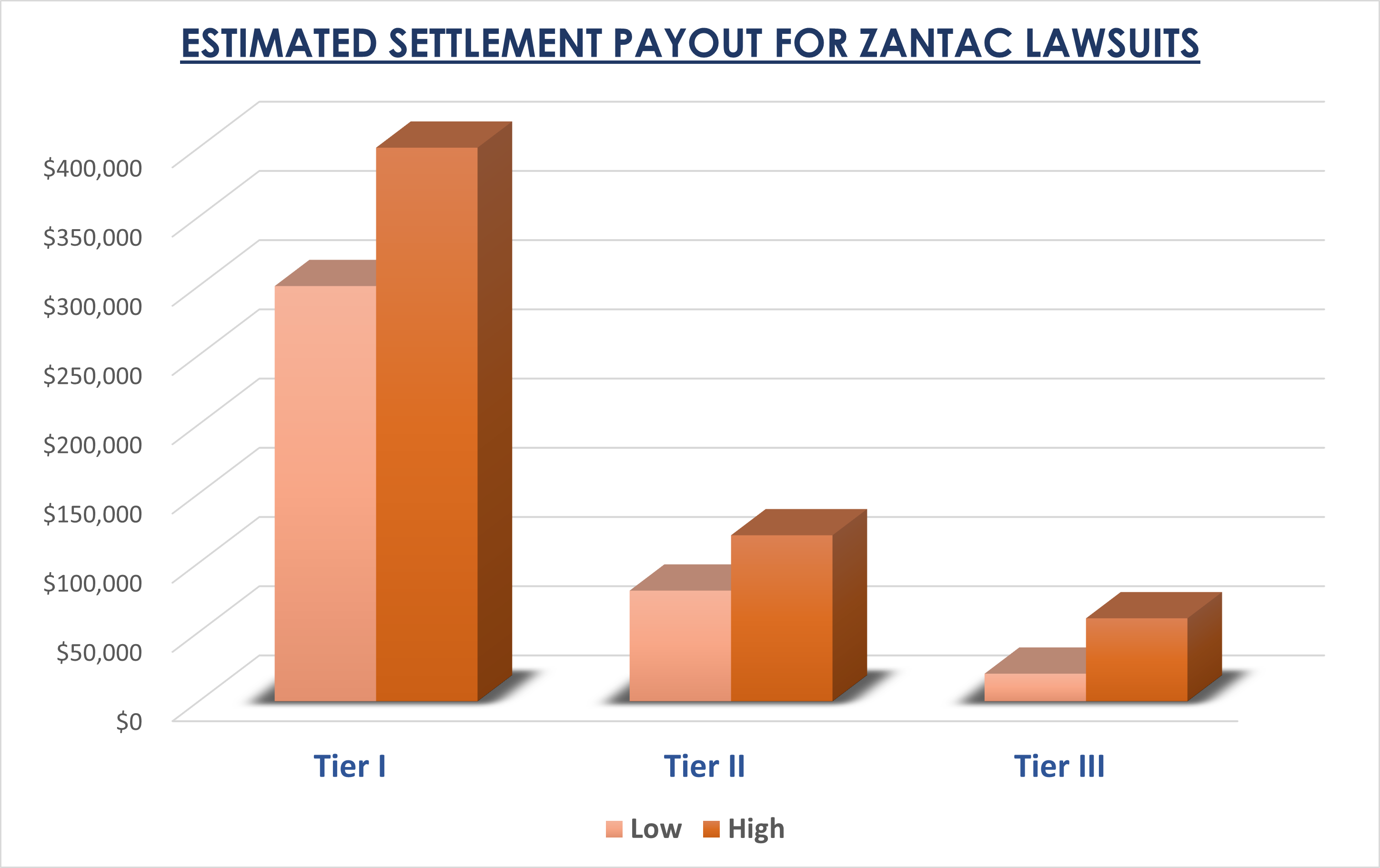 Our estimated settlement payouts in the Zantac cases are based primarily on the global settlement that is currently unfolding in the Roundup mass tort litigation. The Roundup lawsuits are very comparable to the Zantac lawsuits because they both involve a consumer product that caused cancer when used over longer time periods.

There are some differences between Zantac and Roundup. For instance, Roundup was linked to a specific type of cancer (non-Hodgkin lymphoma) whereas the Zantac claims involve various types of cancer. But for the most part, these consolidated mass torts are very similar and the Roundup settlement makes an effective point of comparison for Zantac.

I have already made this point but I will make it again.  These projected Zantac settlement amounts are just that – projected.  So much can happen in this litigation.  If the MDL accepts the plaintiffs’ science of the connection between Zantac and cancer generally and jurors punish these defendants like I think they would, these settlement amounts could be low.  The MDL judge/California state court judge could dismiss all the Zantac lawsuits.  Either scenario is possible.