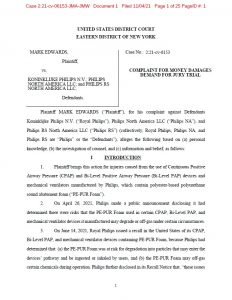 (a) Intro Section Lays Out the CPAP Recall Backstory

The Complaint in Edwards begins with a section entitled “Introduction” which effectively lays out the big picture backstory behind the Philips CPAP recall. The section starts by explaining that Edwards is bringing the lawsuit “for injuries caused from the use of Continuous Positive Airway Pressure (CPAP) … devices and mechanical ventilators manufactured by Philips, which contain polyester-based polyurethane sound abatement foam (“PE-PUR Foam”)”

The intro section then goes on to lay out the details of the CPAP recall:

On June 14, 2021, Royal Philips issued a recall in the United States of its CPAP, Bi-Level PAP, and mechanical ventilator devices containing PE-PUR Foam, because Philips had determined that: (a) the PE-PUR Foam was at risk for degradation into particles that may enter the devices’ pathway and be ingested or inhaled by users, and (b) the PE-PUR Foam may off-gas certain chemicals during operation. Philips further disclosed in its Recall Notice that, “these issues can result in serious injury which can be life-threatening, cause permanent impairment, and/or require medical intervention to preclude permanent impairment.”

Philips has disclosed that the absence of visible particles in the devices does not mean that PE-PUR Foam breakdown has not already begun. Philips reported that lab analysis of the degraded foam reveals the presence of harmful chemicals, including Toluene Diamine (“TDA”), Toluene Diisocyanate (“TDI”), and Diethylene Glycol (“DEG”).

Following the standard sections identifying the parties to case and articulating the basis of the court’s jurisdiction, the Edwards Complaint includes a “Factual Background” section. This section includes 4 paragraphs which provide very general information about CPAP, BiPAP and Mechanical Ventilator devices made by Philips and what these devices are used for.

The next section in the Edwards Complaint is entitled “Substantive Allegations” and it lays out the chronology of the recall and the internal decision making at Philips which led to it:

On April 26, 2021, in its Quarterly Report for Q1 2021, Philips disclosed for the first time, under a section entitled “Regulatory Update,” that device user reports had led to a discovery that the type of PE-PUR Foam Philips used to minimize noise in several CPAP and Bi-Level PAP respirators and mechanical ventilators posed health risks to its users. Specifically, Philips disclosed that “the [PE-PUR] foam may degrade under certain circumstances, influenced by factors including use of unapproved cleaning methods, such as ozone, and certain environmental conditions involving high humidity and temperature.”

Seven weeks later, on June 14, 2021, Philips announced a recall of numerous models of CPAP and Bi-Level PAP devices, as well as a variety of its mechanical ventilators “to address identified potential health risks related to the polyester-based polyurethane (PE-PUR) sound abatement foam component in these devices.” Specifically, Philips announced that it had determined that the “PE-PUR foam may degrade into particles which may enter the device’s air pathway and be ingested or inhaled by the user, and the foam may off-gas certain chemicals.” In total, Philips announced that “[b]etween 3 million and 4 million” devices are targeted in the recall.

This section then moves on to list the various health hazards that Philips identified as potentially related to the problem with the PE-PUR foam. These included “[i]rritation (skin, eye, and respiratory tract), inflammatory response, headache, asthma, adverse effects to other organs (e.g., kidneys and liver) and toxic carcinogenic affects.”

Subsection (C) alleges that Philips unreasonably delayed its recall to protect its business interests. Finally, subsection (D) contains the specific allegations relating to the plaintiff Mark Edwards. This section states that Mr. Edwards bought a DreamStation CPAP device in 2014 and used it every night until the recall in June 2021. The final paragraph of this subsection contains the key allegation asserting a causal link between Mr. Edward’s using the DreamStation and specific physical injuries:

As a result of the health risks associated with continued use of the Recalled Device, Plaintiff was diagnosed with Asthma, Chronic Obstructive Pulmonary Disease, and a large tumor was found in his throat, which required surgery

The Edwards Complaint asserts 9 separate causes of action against Philips related to the CPAP recall:

All these causes of action are tied to Edward’s alleged physical injuries and health conditions:

Plaintiff has experienced significant mental and physical pain and suffering, has sustained permanent injury, has undergone medical treatment and will likely undergo further medical treatment and procedures, has suffered financial or economic loss, including, but not limited to, obligations for medical services and expenses, and/or lost income, and other damages.

This makes it very clear that Edwards is bringing this as a traditional personal injury claim and seeking tort damages for medical expenses, lost wages, pain, and suffering, etc. This is decidedly NOT another case asserting consumer fraud claims and seeking statutory damages.