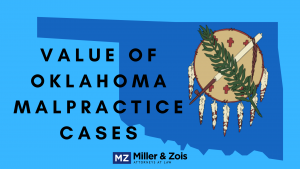 The following are medical malpractice verdicts or settlements that took place in Oklahoma courts: