Our lawyers are actively seeking Camp Lejeune lawsuits from victims across the country.  Anyone who resided or worked at Camp Lejeune prior to 1988 and was subsequently diagnosed with ovarian cancer may have a potential Camp Lejuene lawsuit.

Camp Lejeune is a U.S. Marine Corps instructional facility and one of the largest USMC military bases. Lejeune has been in continuous use by the Marines since 1942 and it encompasses 240 square miles along the North Carolina coast.  The location enables valuable training for Marines in amphibious assault, a large component of the U.S. Marine Corps’ mission in defending our country.

Camp Lejeune is essentially a small town. The base accommodates a resident population of over 50,000 with on-base housing, long-term barracks, schools, playgrounds, a hospital. All the features of a residential town exist on Lejeune. Over the years of its operation, millions of marines, families, and civilian employees have lived and worked at Camp Lejeune.

The Marine Corps built and operated a water supply system that provided Camp Lejeune with potable water. In the 1980s, water quality testing was done at Camp Lejeune for the first time ever. This testing led to the shocking discovery that residents of Camp Lejeune had been drinking and bathing in water that was heavily contaminated with toxic chemicals known as volatile organic compounds (VOCs).

What Was in the Camp Lejeune Water?

Maines did not know that the drinking water at Camp Lejeune was poisoned by toxic cocktail of  dry-cleaning chemicals from a nearby dry-cleaner, industrial solvents, pesticides, gasoline, and oil.  Broadcaster Dan Rather called it the “the worst example of water contamination this country has ever seen.”

The Camp Lejeune water supplied was found to be contaminated with 2 specific toxic chemicals at dangerously high levels: perchloroethylene (PCE) and trichloroethylene (TCE). TCE and PCE belong to a group of chemicals known as chlorinated solvents or organic solvents.

The commercial dry-cleaning industry uses PCE to remove dirt and grease from textiles and clothing. The source of the PCE in the Camp Lejeune water supply was traced back to a dry cleaning business called ABC Cleaners. ABC Cleaners was located right next to the base and for years employees regularly dumped used PCE solution into the ground around the store.

TCE is a degreaser and solvent used on metal machinery and equipment. Marine personnel at Camp Lejeune used TCE to clean and maintain military weapons, equipment and ordinance. Improper disposal and storage of the chemical eventually led to the groundwater contamination at Lejeune.

Two other harmful chemicals were also in the Camp Lejeune water at high levels. Vinyl chloride and Benzene. Benzene and vinyl chloride are both known to be human carcinogens and have been specifically linked to various types of cancer.

Camp Lejeune is often described as one of the worst cases of public water contamination in U.S. history. The chemical levels found in the water at Camp Lejeune hundreds of times above the maximum safe levels set by health agencies. The EPA maximum safe limit for PCE and TCE in drinking water is 5 parts per billion (ppb). TCE levels in the Camp Lejeune water were 1,4000 and PCE levels were 215. But even after detecting shocking levels of contaminants, nothing changed.

When Was the Camp Lejeune Water Contaminated?

Based on the ATSDR’s advanced testing and historical modeling of the water supply system at Camp Lejeune, it has been estimated that the Camp Lejeune water supply was dangerously contaminated from August 1953 to December 1987.

Ovarian cancer is a type of cancer that originates in the ovaries or fallopian tubes of females. Ovarian cancer occurs when epithelial tumors form from cells on the outer surface of the ovary.

The diagnosis of ovarian cancer usually requires a biopsy of the tumor. Treatment options include surgery, chemotherapy, radiation, and targeted therapy.

Extensive scientific research studies have been conducted by various public health agencies to assess the impact that the toxic water Camp Lejeune had on the health of residents and employees at the base. Scientific studies and research outside of the Camp Lejeune context have also been done on the link between occupational exposure to chlorinated solvents and various types of cancer.

Both the health studies involving Camp Lejeune and the epidemiological research on occupational exposure to chlorinated solvents indicate that women who were exposed to the toxic Camp Lejeune water were at higher risk of developing ovarian cancer.

A long-term, comprehensive study conducted by the ATSDR (a branch of the CDC) examined the health records of thousands of former Camp Lejeune residents and employees. These health histories were then compared to health data for a control group of employees and residents from Marine Corps base in California (Camp Pendleton) that did not have contaminated water.

The ATSDR Study was published in 2014 and it found that Camp Lejeune residents and employees had significantly higher rates of ovarian cancer compared to the Camp Pendleton control group. Similar risk increases were noted for other female cancers, such as breast and cervical cancer.

Prisner, et al. v. United States (7:22-cv-137) is an example of a Camp Lejeune ovarian cancer lawsuit. The Prisner case involves three women who lived at Camp Lejeune in the 1970s as the spouse or child of a service member stationed at the base.

Charlotte Luthy resided at Camp Lejeune for 2-years from 1972 to 1974 while her husband was stationed at the base. During that time period, Luthy lived in the Tarawa Terrace family housing area. Following her time at Lejeune, Luthy was diagnosed with ovarian cancer, and she died in 2011 at the age of 62. The lawsuit was filed as a wrongful death case by the administrator of her estate.

The second plaintiff, Tammy Prisner, lived at Camp Lejeune when her father was stationed there on two separate occasions. Prisner first lived at Camp Lejeune for 7 years from when she was 6 months old in 1974 to 1981. Prisner then came back and spent another year a Lejeune from 1984 to 1985. In 1995, Prisner was diagnosed with ovarian cancer when she was just 21 years old. The cancer required 6 surgeries and left her unable to have children.

The third plaintiff, Melody Richards, lived at Camp Lejeune with her husband from 1973 to 1975. She was subsequently diagnosed with ovarian cancer and has suffered other “reproductive health complications.”

All three plaintiffs in the Prisner assert causes of action under the CLJA based on the following allegations: (1) they resided at Camp Lejeune during the 1970s and 1980s, (2) they were subsequently diagnosed with ovarian cancer, and (3) the causal relationship between their ovarian cancer and the toxic Camp Lejeune water is “at least as likely as not.”

The Prisner was one of a large group of Camp Lejeune lawsuits that were immediately filed in federal court the day that the CLJA became law (August 10, 2022). These cases are referred to a “legacy cases” because they are part of the group of Camp Lejeune cases that were filed years ago. These lawsuits were dismissed in 2016 based on the North Carolina repose law and revived by the new law. Since these plaintiffs already went through the six-month administrative claim submission process, their cases were eligible to be re-filed immediately without submitting another administrative claim to JAG.

Who is Eligible to File a Camp Lejeune Ovarian Cancer Lawsuit?

Our lawyers estimate that a successful Camp Lejeune lawsuit involving ovarian cancer may have a value for settlement purposes of $150,000 to $425,000. Although this is a reasonable value estimate for typical ovarian cancer cases, there could be ovarian cancer cases that settle for over $1 million based on compelling circumstances (e.g., young age at diagnosis, wrongful death, etc.). 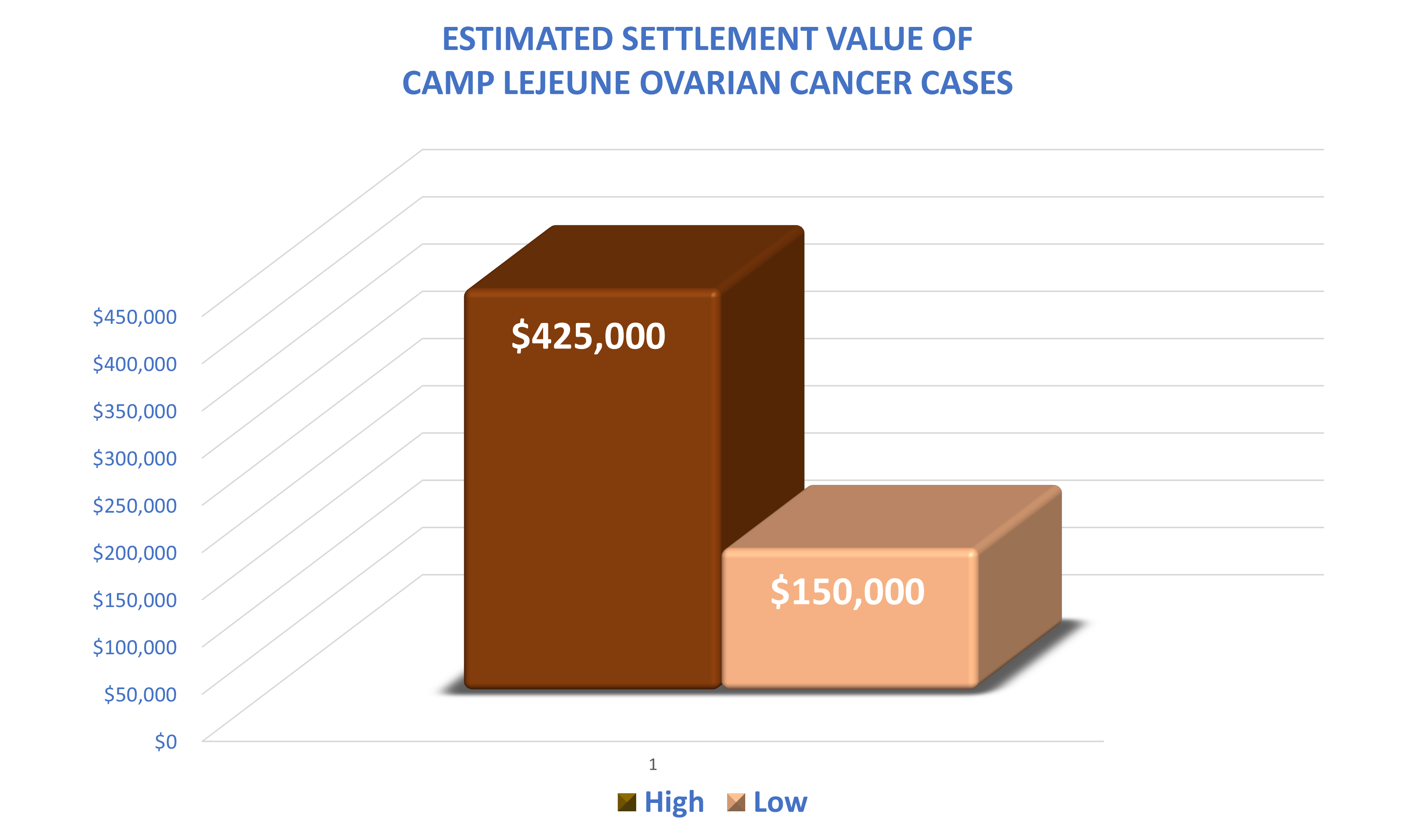 Contact Us About a Camp Lejeune Ovarian Cancer Case

If you (or a deceased family member) lived or worked at Camp Lejeune between 1953 and 1987 and you subsequently developed ovarian cancer, call us today at 800-553-8082 to see if you have a compensation claim.  You can also get a free, no-obligation case review online.