Our attorneys are currently seeking victims seeking to file a Camp Lejeune cancer lawsuit in all 50 states.  Anyone who lived or worked at Camp Lejeune before 1988 and was subsequently diagnosed with hepatic steatosis (fatty liver disease) may be entitled to compensation under a new federal law.

Camp Lejeune has barracks, family housing, schools, hospitals, and accommodations that make it very much like a small town.  The on-base resident population at Camp Lejeune during the relevant period was around 54,000. This was mostly active duty Marines, but also included spouses, children, and other family members. Lejeune was also a workplace for thousands of civilian employees.

Camp Lejeune has its own water supply system to support its resident population. The system utilized groundwater pumps from massive wells located throughout the base. For decades, the water quality at Camp Lejeune was never tested. In the 1980s, however, new regulations forced the Marines to test the water quality at Lejeune for the first time. This led to the shocking discovery that the water at Camp Lejeune was poisoned with extremely high levels of toxic chemicals known as volatile organic compounds (VOCs).

What Chemicals Were in the Water at Camp Lejeune?

PCE is used in the dry-cleaning industry as a garment solvent. Testing determined that the PCE contamination at Lejeune came from improper disposal methods at ABC Cleaners, a dry-cleaning business directly adjacent to the base. TCE is another type of chemical solvent that is often used on large metal equipment. TCE was most likely used at Camp Lejeune to clean and maintain military weapons, equipment, and ordinance. It got into the groundwater through improper disposal and storage.

Two other carcinogenic chemicals were found at notably high levels in the Lejeune water system: benzene and vinyl chloride. Benzene is a petroleum byproduct that is used for a variety of industrial purposes. Benzene is a notorious human carcinogen. Vinyl chloride is a chemical that is mostly used to manufacture plastic pipes. It is highly toxic and known to be associated with various types of cancer.

How Contaminated Was the Water at Camp Lejeune?

Camp Lejeune is generally regarded as one of the worst incidents of water contamination in U.S. history because the levels of the chemical in the water were dangerously high for a very long period. Public health agencies have set the maximum safe level for PCE and TCE in drinking water at 5 parts per billion (ppb). TCE levels in the Camp Lejeune water were 1,4000 and PCE levels were 215, which is thousands of times above the maximum safe limit.

When Was the Camp Lejeune Water Contaminated?

The Agency for Toxic Substances and Disease Registry (ATSDR), which is part of the CDC, research, testing, and historical modeling of the water contamination at Camp Lejeune. Based on this data, the ATSDR concluded that the Lejeune water contamination began in August 1953 and ended in December 1987.

The ATSDR and various other public health agencies have done an extensive research to evaluate the impact that the water contamination at Camp Lejeune had on base residents and employees who were exposed to it. Epidemiological studies have also been done on the connection between exposure to PCE and TCE and various types of cancers and other health conditions. All of these sources have identified a clear causal connection between fatty liver disease (hepatic steatosis) and the TCE and PCE in the water at Camp Lejeune. 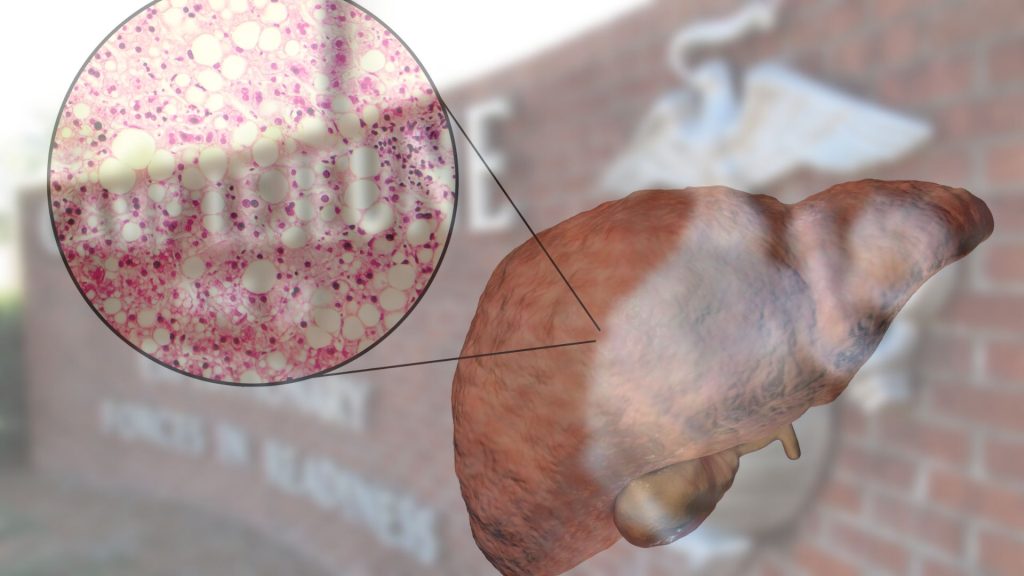 Fatty liver disease and liver cancer are among those health conditions that the Veteran’s Administration has previously labeled as being “presumptively” related to the water at Camp Lejeune.

Who Is Eligible to File a Camp Lejeune Fatty Liver Disease Lawsuit?

Under a new federal law called the Camp Lejeune Justice Act (CLJA), anyone who worked or lived at Camp Lejeune for at least 1 month between August 1953 and December 1987 is now eligible to bring a civil lawsuit for harm caused by the toxic water at Lejeune. Anyone who can prove that they lived or worked at Lejeune during this time and prove that they were subsequently diagnosed with fatty liver disease will be able to bring a case.

Contact Us About a Camp Lejeune Fatty Liver Disease Lawsuit

If you lived or worked at Camp Lejeune between 1953 and 1987 and you were later diagnosed with fatty liver disease (hepatic steatosis) from toxic water, call us today at 800-553-8082 to see if you have a case.  You can also get a free, no-obligation case review online.