Oklahoma’s average malpractice award payment is $230,787. The national average is $285,218.  Other personal injury cases in Oklahoma are more reasonable.  So what is the problem with malpractice cases?

There is no problem.  There WAS a problem.   Oklahoma Statutes Section 23-61.2 limits non-economic damages to an extremely harsh cap of $350,000.  The Oklahoma Supreme Court wisely overturned this law.  But cap – the expectation of it passing – and the uncertainty surrounding it has a chilling impact.

Malpractice Settlements and Verdicts in Oklahoma

2019, Oklahoma: $7,500,000 Settlement. An expectant mother and father arrived at a hospital for the induction of labor because of her low amniotic fluid levels. Over two days later, their son was born with severe metabolic acidosis. They alleged that excessive uterine activity that compromised his blood and oxygen supply caused this. Their now 2-year-old son ultimately suffered hypoxic-ischemic encephalopathy. He is also nonverbal, microcephalic, and experienced developmental delays. The parents allege that staff breached the standard of care by failing to regulate Pitocin administration, institute resuscitation measures in utero, timely notify the physician of the dropping fetal heart rate, and perform an emergency C-section delivery. This case settled for $7,500,000.

2018, Oklahoma: $700,000 Verdict. A mother arrived at the hospital in labor. When labor failed to progress, the staff responded by administering Pitocin. It resumed, but the OB/GYN then encountered shoulder dystocia. They continued with a vaginal birth, despite fetal macrosomia and shoulder dystocia. Their mismanagement resulted in the baby girl’s left brachial plexus injury. Her parents sued the physicians group, the treating OB/GYN, and the hospital for failing to warn of the risks of delivering a macrosomic baby and failing to offer a C-section. They also alleged that the staff improperly administered Pitocin. The hospital and OB/GYN denied negligence and argued that they provided the mother and daughter proper care. Before trial, the parents settled with physicians’ group for $20,000. The parents then went to trial against the OB/GYN and hospital. An Oklahoma County jury awarded them $700,000.

2018, Oklahoma: $3,750,000 Verdict. An elderly woman underwent a right total knee replacement. She was transferred to a rehabilitation facility following the procedure. During her stay, she fell and suffered facial trauma, subdural hematoma, and a fractured hip. She died from her injuries a week later. Her estate alleged that the facility failed to prevent falls, failed to provide appropriate care, and failed to provide proper supervision. The facility denied all negligence and also claimed that she died from a spontaneous subarachnoid hemorrhage unrelated to her care. An Oklahoma County jury ruled in favor of her estate, awarding $3,750,000. 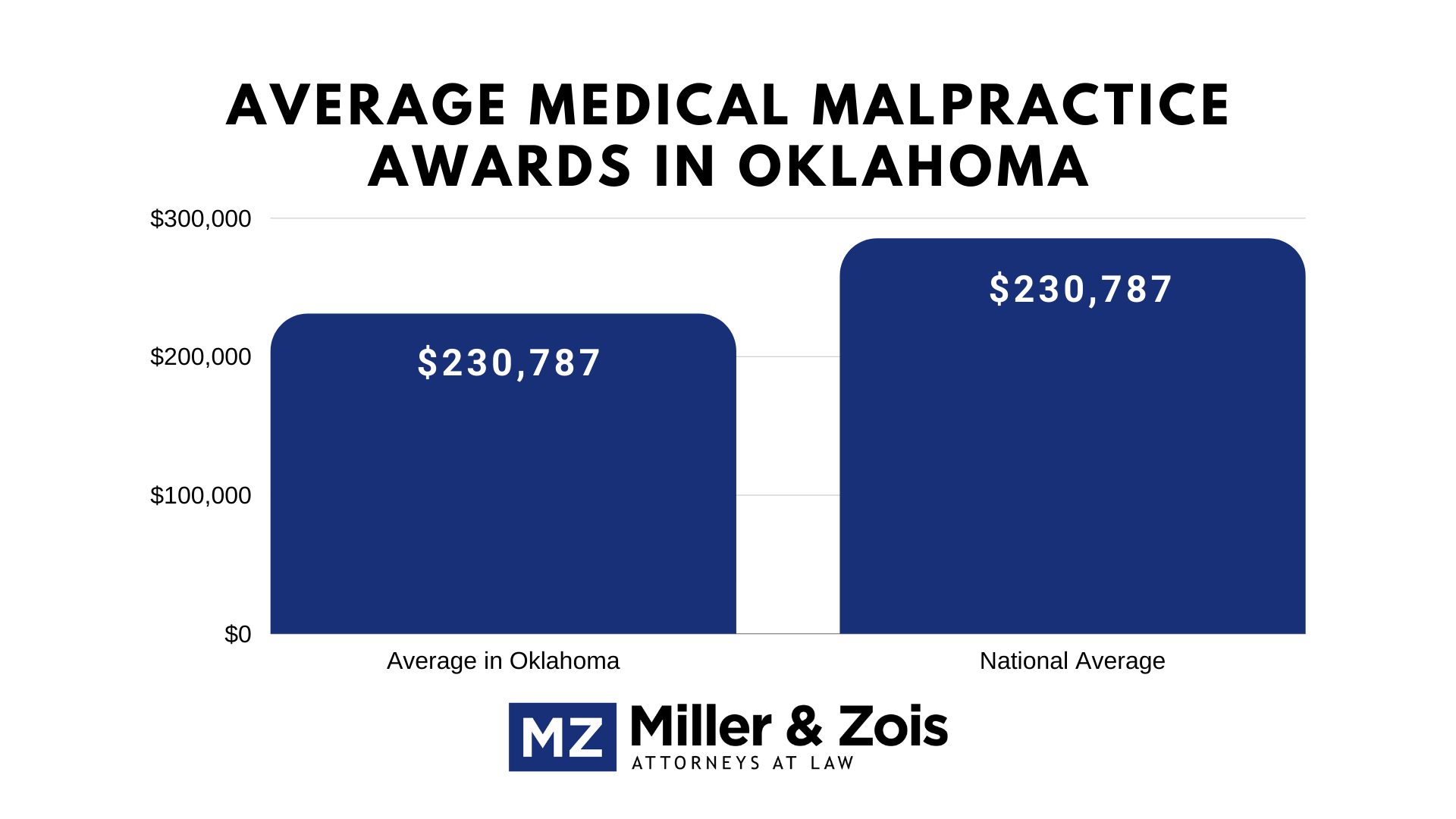 2017, Oklahoma: $35,000 Settlement. A nursing home resident’s dentures were caught in his throat.  They remained there for three days while the staff failed to notice this issue or look for the dentures. He suffered unspecified injuries. The man died of unrelated causes before the case settled. His estate sued the facility, alleging that they failed to monitor the man’s dentures, disregarded his safety, and violated the Oklahoma Nursing Home Act. The case settled for $35,000.

2013, Oklahoma: $2,500,000 Verdict. A 50-year-old woman underwent gastric bypass surgery. Following the procedure, she suffered decreased blood pressure, an elevated heart rate, kidney failure, loss of consciousness, and decreased blood counts. Despite these complications potentially indicating internal bleeding, the surgeon failed to order tests that would have determined their cause. The morning after the surgery, the woman went into arrest, and staff resuscitated her. Hours later, the surgeon performed exploratory surgery but did not find the significant bleeding in the woman’s bowel. She continued to bleed and died the next day. Her estate alleged that the surgeon failed to properly address the woman’s internal bleeding. The surgeon denied negligence, claiming that the woman suffered a known and accepted risk of gastric bypass surgery. Her estate was awarded $2,500,000 in damages.

2012, Oklahoma: $4,375 Verdict. Plaintiff underwent a bilateral breast reduction performed by Defendant plastic surgeon.  Plaintiff alleges that after the procedure, she experienced sores that oozed at several incision sites.  At the time, the Defendant assured her she was healing properly and that the incisions looked fine.  A year and a half later, Plaintiff returned to the Defendant complaining of a foul odor coming from the incision sites.  Defendant determined that she likely retained a stitch from the surgery that had not dissolved.  She performed an in-office procedure to remove the object, a procedure that the Plaintiff claimed was very painful and that she had not been properly informed of the procedure or she would not have consented to it.  After continuing to experience problems with her incisions, Plaintiff consulted another plastic surgeon. He determined she had not suffered an abscess, and diagnosed her with hidradenitis suppurativa (a chronic skin condition that features pea-sized to marble-sized lumps under the skin), requiring surgical excision and skin grafting.  Plaintiff filed suit as a result of the two-year delay in proper treatment and the permanent, painful, and disfiguring scarring. The jury awarded the Plaintiff $4,375.