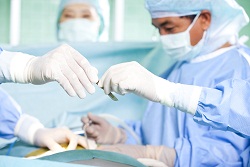 Nashville Public Radio (via TortsProf) reports that a number of medical malpractice lawsuits in Tennessee have dropped 60% after implementation of new certificate of merit requirements in Tennessee, requiring certification of a contention that is difficult to dispute.

Is this true? Why would this be true? Let’s say a lawyer files a malpractice case to preserve limitations and never serves the complaint. His malpractice insurer will raise his rates as a result? Why, in this case, would we blame malpractice lawyers for the rates going up? Wouldn’t the doctor’s beef be with his own insane medical malpractice carrier? If they think so many suits are frivolous, why would the mere filing of a claim be a mark on the doctor’s record?
Norris also says a drop in premiums for doctors could mean lower billing rates for patients down the line. Hold your breath.

What astounds me is that neither Norris nor the author pointed out that lawyers rushed to file before the new law took effect which completely inflates the data. I don’t know how the author researched this story and talked to Norris, and this fact still never came out. (I learned this from a comment to the TortProf post.)
All of that said, I really don’t disagree with the most fundamental premise of the new Tennessee law requiring a doctor to certify before a lawsuit if filed that there is malpractice and resulting injury in the case.