The National Football League has reached a historic settlement with its former players.  A lawsuit has been settled with more than 4,500 retired players who were suing the league, accusing them of deliberately concealing the dangers of head trauma.  The players claimed the league didn’t do enough to warn of the risk of permanent brain damage if they played too soon after a concussion.
Though it still needs to be approved by the judge, the deal calls for the NFL to pay $765 million to fund medical exams, concussion-related compensation, medical research for retired NFL players and their families, and litigation expenses.  This is about $150,000 per player.  What is the settlement structure?  Do the players with real diagnosed injuries get more.  I’m sure they do, but we don’t yet know how it will actually go down.
In the lawsuit, the Plaintiffs claimed that they suffered from neurological problems after sustaining traumatic impacts to the head, and that the league hid the evidence for years. Did they hide evidence?  We won’t know for a while now. 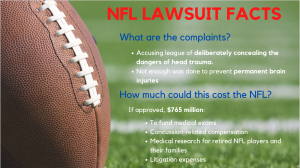 I feel for the players and their families that are left with the results of these injuries.  But I have to ask, what did they expect? How many times can you sustain a blow to the head of this magnitude and not anticipate future repercussions?  Aren’t we looking at some sort of assumption of the risk?  Should we change the game and call it the NFFL – National Flag Football League – or will that lead to some sort of hip-related injury and eventual lawsuit?  I’m sure Muhammad Ali never thought anyone was hiding the dangers that lurked from getting hit in the head.   On the other hand, if the NFL knew things about head injuries and pro football and did not pass them along, that is a big deal.
Make no mistake.  This is a big settlement.  People keep saying that the league makes $9 billion a year.  They do.  But that is not their operating profit.  This is almost 10% of their revenues, which is a great deal of money.

How I Misread This Whole Thing and It Cost Me Money

I had a chance to get in these cases.  I have represented NFL players in the past and I have taught sports law. Players have cold called me asking for help.  I always thought the cases were going nowhere. Did I think they were just claims?  Yes.  But the assumption problem… you just can’t win this case at trial.
What I didn’t realize was how badly the NFL wanted to avoid real discovery.  These cases were settled mostly because rich people – the owners – hate even theoretical risk and there must be some awful paper in their files on head injuries.  My big mistake, as it turns out.
Still, there will be more claims.  At some point, we will know what the league did know.  But there won’t be the risk of thousands and thousands of plaintiffs.
Contact Us
Free Consultation 800-553-8082