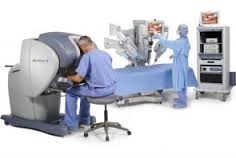 A friend of mine once told me that when he was younger, his mom hated the fact that he played so many video games. It was a stereotypical scenario—my friend was a little nerdy, not athletic, and didn’t like going outside. My friend, who wanted to be a doctor, told his mom something very prophetic: “not only do these video games help my hand-eye coordination, which is important for surgery, but there will come a day when complicated surgeries are performed like video games.”

Enter the da Vinci Surgical System. Named after one of the world’s most renowned Renaissance men, this $2 million (excluding maintenance costs) computer does it all, including surgery for:

It is billed as less invasive than standard surgery. The manufacturer, Intuitive Surgical, states that “you can have major surgery with only a few tiny incisions. In addition, your surgeon can operate with better visualization, precision, dexterity, and control than possible using traditional surgical approaches.” It’s like drawing a picture on a computer—you can zoom in to a level that is impossible with simply the human eye, and you can operate tiny surgical instruments that are impossible to hold with human hands. It’s not a stretch to imagine that one day we will be able to perform surgery on a cellular level. The medical device community knows this well—Intuitive Surgical made $233 million in profits last year.

Recently, one such federal lawsuit was filed against Intuitive, alleging that the da Vinci killed its patient—a 24-year-old woman who was in for a hysterectomy. The lawsuit alleges that electrical current jumped to the patient, causing severe burns to an artery and her intestines. She died two weeks later.

Great technology… if it works

A number of complications have resulted where doctors at Wentworth-Douglass Hospital used a da Vinci, including cut bladders, cut ureters, and possibly a lacerated esophagus. Fortunately, the evidence is likely to be there—the computer will have a record of all commands sent to it, and all actions are taken. Essentially, it’s like finding a black box after a trucking accident or an airplane crash. There should be a record of all data sent to and from the machine which should allow experts to identify where the problem originated from. In many cases, that data might clear the surgeon from liability, showing that he did everything right and that the defect came from the machine.

da Vinci Expert Witnesses
A lawsuit like this will require an extraordinary number of expert witnesses to prove the claim. These will likely include:

One more note about the training—some doctors experienced with the da Vinci caution that it can take between 200 and 750 surgeries to master the device. That’s a steep learning curve, especially for those first 750 patients. If your doctor tells you he plans to use the da Vinci, find out how many other surgeries he or she has done with it.

If you have experienced an injury after a robotic surgery or procedure, including one by Intuitive Surgical’s da Vinci Surgical System, contact our medical malpractice and medical device lawyers at 1.800.553.8082, or online.